New artist of the week: Parcels 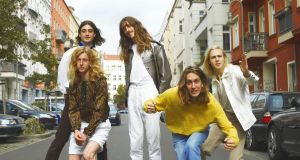 What: Synth-poppers with famous friends

Why: If you were in a band that made disco-indebted synth-pop music and were playing a show in Paris, you already know who would be in your dream audience. That’s exactly what happened when the Australian (via Berlin) band Parcels played the French capital and were approached after the show by Thomas Bangalter and Guy-Manuel de Homem-Christo of Daft Punk, who asked if they could work with them. No big deal.

Overnight, the band’s debut single, which was co-produced with the Daft Punk duo, does indeed sound like a Get Lucky out-take in the way it embraces vintage funk guitar, slinking bass and shimmering production. It has netted them 13 million streams of the song. An EP followed, which stretched the template to Metronomy-style music with funk and electronic pop.

A planned show at Body&Soul Festival last summer ended in disappointment when their gear didn’t arrive in time for their set. Hopefully plans are in motion for their return as their 2018 schedule already has them flying between their native homeland and Europe for live shows.

You have to hear this . . . SZA – The Weekend (Calvin Harris remix)

It was unforeseen that Calvin Harris would end up with one of the most universally acknowledged best songs of 2017 in Slide. Here, the Scottish producer adds some bright funk bounce to another of 2017’s winners SZA, whose CTRL album is an essential intimate R&B takeaway from this year.

The self-styled boyband were easily the most exciting new rap act who appeared this year and it feels like the 15-strong LA-based crew are only getting started. They finished the year by releasing the third release in their Saturation trilogy of albums, which kicks off in frenetic effect with this defiant song and the refrain: “I’ve been beat up my whole life/I’ve been shot down, kicked out twice/Ain’t no stoppin’ me tonight.”