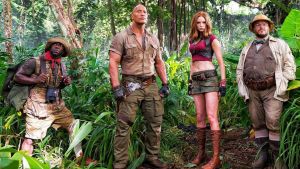 Jumanji: Welcome to the Jungle

One might reasonably imagine that future US president Dwayne Johnson might be wary of unwanted reboots after last summer’s pointless excavation of Baywatch. But no. The artist formerly known as The Rock is back for what parent studio Sony Pictures call a “stand-alone sequel” to the hit 1995 film. That lengthy hiatus between instalments is hardly a good sign. Delayed Sequel Syndrome has previously spewed such unlovely fare as Wall Street: Money Never Sleeps and Independence Day 2. Might this be the trend-bucking Blade Runner 2049 of family films?

Not quite. But rather surprisingly, the second Jumanji caper has a “big idea” that extends beyond opportunistic brand recognition. With more than a nod to The Breakfast Club, the film gathers together a group of mismatched teens – gaming geek Spencer (Alex Wolff), popular girl Bethany (Madison Iseman), sports star Anthony (Ser’Darius Blain) and scholarly Martha (Morgan Turner) – for after-school detention.

The quartet soon stumble on an ancient gaming system, one that transports them into the titular video game, where they must solve riddles, avoid charging rhinos, evade the bad guys and complete missions, and where their avatars are three major box office draws: Messrs Johnson, Hart and Black.

Karen Gillan rounds off the group and as nice as it is to see the former Doctor Who star on the big screen, there’s something disconcerting about the imbalance of parachuting her into a group of the planet’s most recognisable humans. Franchise fans have been calling out her inappropriately skimpy outfit since the first trailer was released last March. She and the film-makers have always insisted that the crop-top and kinky boots are a “satire of the sexist ways video games dress women”. But if it looks like crass objectification and quacks like crass objectification ...

It’s a shame for a fun family film that otherwise coasts along on the juxtaposition of placing the cheerleader in the body of Jack Black, Dwayne Johnson’s smoulder powers and Kevin Hart’s reliably entertaining hissy fits.