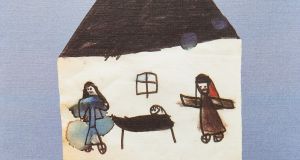 2003: I sing of a maiden. Photograph: Seamus Heaney Estate 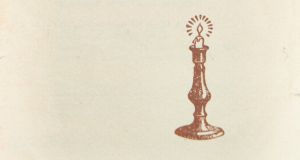 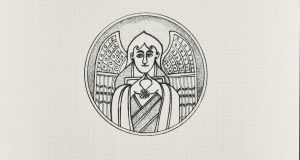 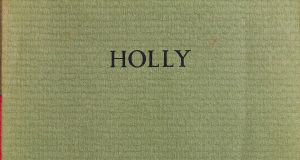 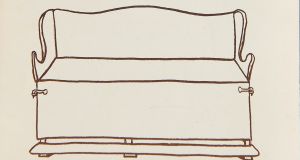 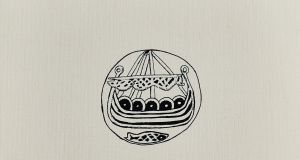 Every December, the poet Seamus Heaney used to sit down not merely to write but to design his own Christmas cards.

For more than 30 years, he produced his own cards for family and friends, each one in a style reminiscent of his collections of poetry and featuring an image from a favourite artist - or his children’s artwork - together with a line of text from a new poem or other work in progress.

The cards were printed by Heaney’s friend Peter Fallon, of The Gallery Press, and as Christmas drew nearer the hall table in the Heaney household would gradually become hidden under what the poet’s daughter Catherine remembered as “sliding drifts of envelopes ready to be posted”.

A selection of these cards - loaned by the recipients - will go on display for the first time today as part of the “Longing for Snow” Christmas exhibition at the Seamus Heaney HomePlace in Bellaghy, Co Derry.

Some - like 1978’s Christmas Eve and Holly, which formed the basis for cards in 1981 and 1984 - have a clear seasonal message, while others such as The Settle Bed (1989) and Derry I Cherish Ever (2008) carry a more reflective sentiment appropriate to the ending of one year and the beginning of another.

They also demonstrate the poet’s current preoccupations - 2007’s card, Wind Fierce To-Night, is based on a poem Heaney translated that year from an early Irish manuscript, and which describes Irish monks’ fear of Norse invaders.

The Settle Bed, which was published in the 1991 collection Seeing Things, includes a pencilled change to a word, and demonstrates Heaney’s editing process at work.

Among the most personal is 2003’s I Sing of a Maiden, which features a nativity scene drawn by Catherine Heaney as a three-year-old, accompanied by Heaney’s translation of a medieval poem describing the Virgin Birth.

“He saw Christmas as a family time,” explained Heaney’s nephew and manager of the Seamus Heaney HomePlace, Brian McCormick.

“He travelled up north at any opportunity he got over Christmas.

“One of the traditions was that all the Heaney brothers, all of my uncles, would have gone over to Hugh Heaney’s farm [one of the poet’s brothers] to pluck turkeys a couple of weeks before Christmas, and he was always involved in that and always made time for that.

“I also remember the Christmas after my mother [Heaney’s sister Sheena] died, and Seamus coming through the door, and that was obviously a very emotional occasion for my father and for the rest of us.

“I had a couple of friends in the house with me that evening as well and he just sat down at the kitchen table with us and he had that very normal, natural style of conversation where he made everyone feel comfortable and at ease.

“Those are the connections and the memories that become heightened at Christmas.”

Each of the cards includes personalised greeting to the recipients - something which McCormick admits amazes him.

“It wasn’t just a simple, ‘Happy Christmas, Seamus and Marie’. Every single card had an individual note in there, and I don’t know how he ever managed to do it, but he obviously placed great importance on it.

“I suppose it’s a reflection of the man and the time he had for people and family,” he said.

“As the years went on and his life became busier and less his own, we’d sometimes urge him to scale back a bit, give himself a break, only send cards to his nearest and dearest - but he never did,” Catherine Heaney recalled.

“In spite of the time and effort it took, and the constant anxiety that he’d forgotten someone, he actually enjoyed the task and to me it seemed a reflection of the great store he set by his friendships, and the care he took in maintaining them.”

Also on display will be an unpublished poem, A Christmas Rhyme, which was re-discovered during the search for Christmas cards.

The poem was written as a Christmas greeting to McCormick’s parents - Heaney’s sister and brother-in-law - and describes “going the rounds” of family and friends at Christmas time, beginning with the family farm at Mossbawn, then to Cookstown and Magherafelt and finishing in Bellaghy.

“It was lying in a box and it had never been written for publication, but a memory must have come back to him of doing the Christmas rounds,” said McCormick.

“His last volume of poetry was called Human Chain, and that chain of going at Christmas time to the various uncles and so on is reflected in the poem.

“I found it exceptionally touching, because a lot of the people he references in the poems would have been my great aunts and uncles and I remember a lot of them very fondly, and to read that back is very special.

“But we all have those experiences of going round to our relations at Christmas, so it’s like all of his poetry, it’s something everyone can relate to.”

* “Longing for Snow” is on display at the Seamus Heaney HomePlace in Bellaghy, Co Derry, until January 7th 2018.

1978.  One of the earliest of his Christmas cards, Heaney chose this poem to send to family and friends as his seasonal greeting and the work formed the opening of An Ulster Twilight in Station Island.

Unusually, the poem Holly was the focus of Christmas cards in two separate years, and shows the evolution of its language between its first use in 1981 and the final revision of 1984 and its publication in Station Island.

With an illustration by Catherine Ann Heaney on the front, this card was a sneak preview of the poem which was to appear in Heaney’s 1991 collection Seeing Things and includes a pencilled change to a word which shows the poet’s editing process at work.

A three-year old Catherine Ann Heaney drew the nativity scene which accompanies the text, Heaney’s translation of the Medieval poem I Syng of a Mayden, which describes the Immaculate Conception and Mary choosing to be the mother of the “King of all Kings”.

Originating in an early Irish manuscript, circa 850 AD (now in the monastery of St. Gall in Switzerland), this poem conveys the fear and dread of Norse invaders which was prevalent in early Irish monasteries. Heaney translated the work in 2007 and the artist Tim O’Neill created the cover illustration of a Viking coin.

This card contains a translation of the 12th century poem Derry I cherish ever / Is aire charaim Doire which was published in Heaney’s final volume of poetry in 2010, Human Chain.