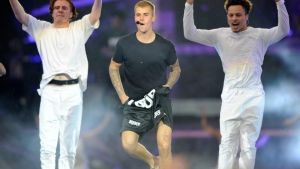 Let’s get this straight: Justin Bieber is the most heterosexual of pop stars. There’s no room for anything verging on the ludicrously camp, that willing winky face of mischievousness or bombast that most great male pop stars from Prince to Michael Jackson to even Kanye flirted with on occasion.

He stands, hands firmly placed on the crotch of his shorts, with Michelangelo’s hymn to male perfection, the statue of David, bearing down on him from the enormo-screens, looking like a bored dudebro waiting for his Ryanair flight to Magaluf. A Fisher Price Eminem, he strolls the length of the stage with hands now moved into his pockets and stares off into the middle distance, as legions of glitter-faced girls clamour at the barriers to be noticed.

Swaggering about in the most nonchalant style as Where Are Ü Now, with its Skrillex whirlpool of bleeps engulfing him, he barely raises a grin, not even as the full voltage force of teen screams reach a crescendo, not even as the sizzling fireworks blast all around him. He’s seems like pop’s Liam Gallagher on Xanax but this is not the cool pose of a rock star but rather a strange worrying blankness, like a disgruntled child actor waiting to be taken seriously.

With his smooth vocals slipping over the sweaty sun-drenched crowd to the whirr of I’ll Show You as he shadow-boxes in a makeshift UFC cage (that also unfortunately looks a bit like a child’s back-garden trampoline), he cuts an almost sad figure, the poignancy of the popstar stuck in a prison of his own creation.

Bieber should be savouring this moment. Sadly, it doesn’t seem to matter that the assembled girls and now extra added guys are screaming back every line. There is something about him and his limp, flaccid performance that feels like he’s still uncomfortable. There is no confident strut of a world-beater, the boy who managed to pull a Lazarus trick and breathe new life into a limited career, only the robotic half-shimmy of a star going through the motions.

Even with all the kudos and credibility, Bieber looks as if he’s waiting for the magic carpet to be ripped from under him, or maybe, like a depressed polar bear patrolling its parameters in a zoo, he’s just “over it”.

It’s not as if he hasn’t got the tunes. Everyone by now is aware of the Bieb’s reimagining as the poster boy for tropical house and gentle techno bops. He’s an interesting prospect, a star that can move from being a Justin Timberlake R&B smoothie on the sub-new-jack swing of Hold Tight to his more intriguing guise as the faceless, comedown king on tracks such as the deliciously hazy No Sense, which he slides into after a sultry version of Company.

He jerks into a half-life for only a handful of moments. There is an acoustic strum of Love Yourself, which is pop at its most sweet and refreshing, a summer breeze tingling through the crowd raising goosebumps on even the most sunburnt of skin. Then later, in a truly bizarre moment, a drum-kit is wheeled out for young Justin to have an amateurish bash on, which continues for an alarming amount of time as he is raised over the crowd. He is Little Lord Fauntleroy, a child attempting to impress his mother on Christmas morning.

And yet, all this sullen behaviour can be forgiven because when Bieber is good, he is very, very good. He may look like your best mate’s younger brother who’s just discovered lifting and protein powders, but when he is gifted with glorious jewels of pop songs, he makes them shine. For the last half-hour, banger follows banger, from the simple beauty of Let Me Love You to the lazy thrill of What Do You Mean?, with the audience becoming more fevered. Just as the sky breaks and the rain hits like shards of glass, he unleashes a beefed-up version of his boyhood smash Baby.

With this comfortable acknowledgement and integration of his past maybe Bieber’s future might not be so bleak. Spinning into the night with the gloriously wonky fiesta of Sorry, Bieber should know by now that his apology has more than been accepted and also that true forgiveness begins within the self.