U2 to outline tour dates for The Joshua Tree on Monday

Bono and The Edge offer fans the opportunity to watch them live as part of a giveaway for Aids charity Red. Video: U2/Omaze/Red 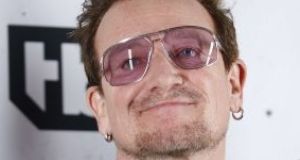 Reliable sources have indicated that U2 are to outline their plans on Monday for a major 2017 stadium tour of their 1987 album The Joshua Tree.

Reliable sources have indicated that U2 are to outline their plans on Monday for a major 2017 stadium tour of their 1987 album The Joshua Tree.

The band confirmed two weeks ago in a video message that they would be doing Joshua Tree tour dates this year. Monday should see all dates and venues confirmed. Insiders say it’s likely that there will be two Joshua Tree shows in Croke Park this July.

It’s an unexpected move given that the band - in their 40 year long career - have never before toured a catalogue album; they have only ever gone out on the back of a new release.

U2 are also currently putting the finishing touches to their new album, Songs of Experience which now seems to have been put back until Autumn 2017.

But the political climate in the US may have forced their hand. The Joshua Tree album was part written as a rebuke of the then US Republican president Ronald Reagan and the band used their tour of the album to criticise the policies of the Reagan administration.

As very vocal critics of President-Elect Donald Trump, they may be revisiting this approach this time around.

It is believed that the Joshua Tree 30th Anniversary tour will kick off in Vancouver on May 12th and will travel around stadiums in the US before arriving in Europe in July. It is expected that Noel Gallagher will be the supporting act on the European dates.

The Joshua Tree is by far and away the band’s most successful album with over 25 million albums sold - it is also one of the best-selling rock albums of all time. It lifted U2 to mega-stardom by becoming a number one seller around the world in 1987, winning a Grammy award for Best Album and putting the band on the cover of Time magazine as “Rock’s Hottest Ticket”.

A new single from the original Joshua Tree sessions is expected to be released shortly to tie-in with the tour. By a strange coincidence, this could be a song called Beautiful Ghost/Introduction to Songs of Experience which was supposed to go on the original 1987 album but was cut for space.

But the smart money here is on the track Red Hill Mining Town which the band feel is one of the strongest moments on the Joshua Tree album; oddly it’s a U2 song that has never been played live.

Red Hill Mining Town would be appropriate as it was written about the stress felt and disputes caused by a political event (the bitter 1984 UK miners strike) and how it fractured and polarised a country.

The show will be more than just the complete Joshua Tree album, but it remains to be seen how much of the new Songs of Experience album will also be played.

Very much a political album (by the band’s standards) on its release in March 1987, The Joshua Tree was going to be a double album called The Two Americas right up until the last moment.

The album was a love/hate letter to America detailing the band’s strong appreciation of American culture (music, film and literature specifically) but also their abhorrence at the US government’s illegal military intervention in Central American countries.

What happened to the band during the original Joshua Tree tour has eerie echoes with what is happening today in the US.

A white nationalist threatened to shoot Bono on stage if the band continued to give their vocal support to the honouring of Martin Luther King day (a holiday to celebrate the civil rights leader).

Some Southern states held out on officially recognising the day and as Bono remembers “we got involved in local politics in certain states and took a stand. The death threats came from a racist offended by our work - he thought we were messing in other people’s business and “taking sides with the black man”. On one night, the FBI said “Look, it’s quite serious. He says he has a ticket and he’s armed” so everyone was a little unnerved”.

Another particular death threat was taken so seriously by the FBI that the band were advised to cancel a certain concert. The band’s single Pride was written as a tribute to Dr. King.

Before the recent US election, Bono described Donald Trump as “dangerous” and “the worst idea America ever had”.

Two years ago, the Joshua Tree album was deemed “culturally, historically or aesthetically significant” by the US Library of Congress and selected for preservation in the National Recording Registry which “represents America’s culture and history” - the only Irish musical work to be so honoured.

The Music Quiz: What was Shane MacGowan’s first band called?
6