Westworld review: may the robots rise up to meet us

Westworld shows you “who you really are”, say its more evangelical visitors, and few series better reward their fans’ obsession with detail 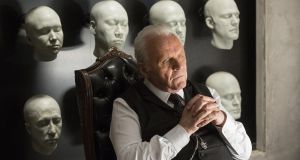 And so the sun sets on Westworld (Tuesday, Sky Atlantic, 10pm), a costly, time-consuming and utterly rewarding study in obsession.

That was the force that compelled Dr Ford, played with Anthony Hopkins’s customary silken menace, to build an almost boundless Wild West theme park with his partner Arnold (mysteriously deceased but somehow always present), and populate it with sentient “hosts”, robots who existed only to serve the ugly fantasies of rich visitors.

A similar obsession, an itch that became an instinct, propelled some of those hosts, Evan Rachel Wood’s luminescent farm girl Delores and Thandie Newton’s sharp-tongued saloon madame Maeve, to follow fractured memories towards respective break outs. In Delores’s case, this is a move towards consciousness and self-realisation; in Maeve’s, it’s an all-guns-blazing literal escape plan. And it guides the Man in Black (Ed Harris’s violent sadist), cunningly reconceived from the renegade robot in Michael Crichton’s original to become something even less human, a corporate shareholder, to search Westworld for a “deeper level” to the game. Rarely has a prestige HBO show mirrored its audience so knowingly or so skilfully. If you’ve spent as many hours chasing down these narratives as Harris, it better be worth something.

Westworld shows you “who you really are”, Jimmi Simpson’s new arrival and early evangelist William enthused, and the twist of the series is to show us who William really is: not the white-hatted romantic keen to liberate Delores, but – to borrow a phrase from another of writer Jonathan Nolan’s scripts – the hero who lives long enough to become the villain. Westworld also shows the audience who they really are: fans who will invest time, thought and spiralling internet discussions in an entirely escapist drama, gladly accepting acres of tastefully shot nudity and lavishly realised violence, while also flattering themselves as armchair philosophers of the mind.

A recurring motif of the series is a curiously designed maze that Delores and the Man in Black are both seeking. Viewers have submitted to other labyrinthine TV narratives before, only to get frustrated by the chicanes of Lost or the turgid fourth dimensional meditations of True Detective. Westworld’s maze was either going to be: a maze of the self; or an actual frickin’ maze. Neither is promising.

Instead, it’s a serviceable McGuffin. Writers Nolan and Lisa Joy manage to sustain an artful game of perspective, with a narrative that journeys as far across these ersatz plains as it does through time, something that only became apparent in its later episodes. (Unless, of course, you had kept up with unerringly accurate fan theories online. A show made with obsessive detail will reliably court obsessives.)

Nolan, the writer behind Memento and his brother Christopher’s Batman movies, has eked out a career balancing elaborate concept with big budgets. The great promise of his collaboration with Joy was that Westworld would be absorbing enough to reward careful attention, that its complexity would intrigue rather than bewilder, and its completion would bring some satisfaction – much like reaching the centre of that maze.

It alludes to the deeper level of our anxieties, perhaps a little too stridently in the robots’ tussle between freewill and determinism, or too geekily in the philosophical worry that this life is but a dream. (My favourite moment, amid various impressive set pieces, came when one of Maeve’s human accomplices regarded his hands in existential worry. “Oh, for f**k’s sake,” dismisses Maeve, “you’re not one of us, you’re one of them.”)

But it certainly came with fortuitous timing, a welcome distraction from a raging and inexplicable world outside, which the park’s patrons also seem to be fleeing in their droves. Business here is booming, we are told, “because this place feels more real than the real world”. The corporate villains in Westworld are revealed finally to be enemies of such complexity, wanting the narratives to be “simpler, more manageable” than the ones Hopkins’s godlike showrunner is concocting.

Concluding with an inevitable robot uprising, Westworld’s revolution was part of his Byzantine plan all along, it seems, but it won’t be until 2018 that we see its bloody consequences. Otherwise the creators of Westworld know they have us hooked. Who wouldn’t take these knotty new narratives, meticulous designed, layered and artificial, over the scrappy ones we’re living?