Election debate: ‘Peter Casey seems like a millionaire in dire need of a new hobby’

Prime Time Election Debate: Too little discussion of Europe, too much of Peter Casey

The Green Party's Saoirse McHugh hits out at Independent candidate Peter Casey during a Prime Time European Election debate, telling the former presidential election candidate to "go on Dancing with the Stars if you want the attention." Video: RTÉ 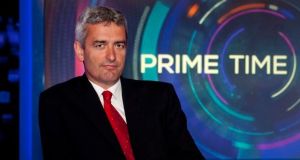 When is a debate not a debate? When it’s a derby.

In the last of Prime Time’s three European Election debates, this special broadcast must contend with the sheer volume of candidates for the Midlands-North-West mega constituency.

Although just less than half of the 17 candidates have made it to the studio (others are represented by recorded stump-speeches that have all the confidence and polish of hostage videos), they are crammed onstage like horses at the starting gate. Brexit, announces moderator David McCullagh.

Or, in Luke Ming Flanagan’s case, and by his own admission, way off. Asked about encouraging Irish voters in Britain to vote Leave, Flanagan, seeking re-election, explains he had hoped for “a jolt to this project of an ever-closer union”, and now appears to be more careful what he wishes for.

On the whole, the opinion here is that Brexit, this ever-delayed separation, is both regrettable and dangerous and that Ireland is better off in Europe.

Yet integration makes many wary: Labour’s Dominic Hannigan speaks of losing an ally in Britain against Europe’s “federalist” inclinations. Fine Gael’s Maireád McGuinness, seeking re-election, will not countenance Europe meddling in our corporate tax laws or forcing us to take Apple’s €13billion penalty (“Wouldn’t it be great if we had the money,” she says, “but we don’t.”).

Asked what Ireland should say to Emmanuel Macron’s entreaties for “closer co-operation”, Green Party newcomer Saoirse McHugh responds, “No thanks, Macron!” with more pith than persuasion. She speaks instead of the co-operations she deems more important, such as corporate tax rates and tackling climate change, an existential threat that the debate somehow does consider quite as dangerous as Peter Casey.

A noisome firebrand, a millionaire who appears to be in dire need of a new hobby, Casey in this debate comes across a little like the horse that has thrown its rider: disruptive, attention-grabbing and all over the place.

“Lots of different views on Europe,” McCullagh puts it to him wryly, “and you’re in the happy position that at one time or another you’ve held all of those positions.”

Casey cleaves the air and speaks in reactionary gibberish. “Whatever deal Britain gets, we should get it,” he says.

Where do you even start with that?

“So you’re talking about [Ireland] leaving the EU?” McCullagh tries to clarify at one point. “No,” says Casey, clarity’s worst enemy, “I’m saying we should discuss it.”

Casey wants other “discussions” – on migration, welfare, asylum seekers – but doesn’t like to discuss them, preferring ceaseless interjections instead. This has the unfortunate consequence of making the debate less about Europe (which never fires anyone’s passions) and much more about Peter Casey.

Hannigan exposes his tactics (“He never tells us what he means by that.”), Flanagan corrects his “welfare tourists” canard, Sinn Féin’s Matt Carthy lambasts him for “exploiting that anger” of the disenfranchised, Fianna Fáil’s Brendan Smith shames him for classing victims of sexual violence as “freeloaders”, and the dauntless Mairead McGuinness counters his scaremongering with a memorable retort: “The scariest thing about this right now is your comments,” she tells him. “I hope people realise what you’re trying to do.”

Casey may demand attention, but Saoirse McHugh earns it, distinguishing herself while neatly dispatching the fomenter. “This is why I have a problem with platforming these incoherent, fear-mongering views,” she says. “It looks like it’s just for attention, Peter. You haven’t an idea what you’re talking about.”

She points out the vicious ends of such rabble-rousing. “There are real repercussions to this absolute nonsense.”

And then the coup de grâce: “Go on Dancing with the Stars if you want attention.” Please, don’t encourage him.

Some will take heart from the fact that the one thing that seems to unite the candidates is the effort to rebuff the kind of xenophobia that is sweeping through so much of Europe, threatening ever-closer disintegration.

But Ireland is hardly impervious to the lure of populism or nativism. Forty-seven per cent of respondents to a recent Behaviour & Attitudes poll of agreed with the statement, “We are losing our identity in the face of foreign national influx”, McCullagh points out.

Whether there are votes in appealing to our better, more co-operative selves, or pandering to prejudices, is something the election may determine.

In calmer places, and with leveller heads, there is much to discuss.