Weekend TV guide: 8 of the best shows to watch

Shane Lowry chats with Ryan Tubridy, plus Renée Zellweger on Graham Norton, scandals in the House of York, and encore screening of Brendan Grace tribute 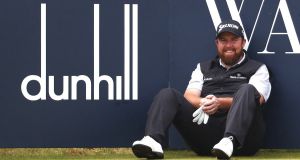 The Late Late Show
Friday, RTÉ One, 9.35pm
It has been over two months since golfer Shane Lowry’s phenomenal win at the British Open. Now the Offaly man sits down with Ryan Tubridy to describe how life has changed and if the celebrations have actually stopped! Various proud members of Lowry’s family will also be attending the show. Also: Best-selling British author Jeffrey Archer tells Tubridy why, at the age of 79, he has no intention of putting down the pen. The former Tory politician will also discuss why he’s a Remainer who wants to see Brexit happen, and what he thinks of Boris Johnson. Plus: former Ireland International and RTÉ soccer analyst Richie Sadlier on a very personal story; a special 25th anniversary performance of Riverdance and affectionate reminisces from the show’s dancers from down the years; Limerick native Jean Tierney, who captured the hearts of the nation when she told her story on Operation Transformation earlier this year; and music from newcomer D Cullen, who debuts his new single.

Inside the Cockpit: The Concorde Crash
Friday, Channel 5, 9.15pm

In the summer of 2000, an Air France Concorde took off from Charles de Gaulle Airport heading for JFK International Airport in New York. It crashed shortly after take-off, killing all 109 passengers and crew members on board, as well as at least four people on the ground. In 24 years of commercial flight, Concorde had an unblemished record and was considered one of the safest passenger planes in history, so little wonder the world reeled in shock. Almost 20 years after that fateful day, this film re-examines the causes of the incident, as revealed by British and French air crash investigators. Just what was it that led to the deaths of so many people?

The Ray D’Arcy Show
Saturday, RTÉ One, 9.50pm
Actor and entertainer Rory Cowan will chat to Ray about his new autobiography, Mrs Cowan’s Boy, in which he pays a moving tribute to his late mother. Cowan will also talk about his campaign work for dementia awareness and discusses life after Mrs. Brown. Also: David Gray will join forces with the RTÉ Concert Orchestra for a unique performance of Babylon to promote next year’s concert tour, White Ladder: The 20th Anniversary Tour. Plus: singer and The Commitments star Bronagh Gallagher on her new movie, A Bump Along the Way; comedian Reginald D Hunter onhis new stand-up show Facing the Beast; and Irishman Abroad podcaster Jarlath Regan on life as an “Irishman Abroad” and making one Irish emigrant's dream come true by announcing the winner of a €30,000 competition to bring them home.

Prince Andrew & Scandal in the House of York
Saturday, Channel 5, 9.20pm
Since the 15th century, the title Duke of York has usually been given to the second son of the British monarch. And over the centuries the House of York of has been the subject of many a scandal. Take 1809, when the public was distracted from a military humiliation in Spain by a scandal involving the Duke of York, the commander-in-chief of the army, and the sale of commissions by his former mistress. The present-day Duke of York, Prince Andrew, is also no stranger to controversy. And as he once again finds himself on the front pages of the newspapers, this documentary uses insider testimony and archive to look back at the controversies and scandals that have engulfed the House of York through the centuries, up to the present day.

The ace adventurer is off on his travels again, and it’s a real epic trip this time, one that takes him from the most northern point of the American continent to the most southern, and taking in all manner of extraordinary sights and sounds in between. Reeve begins in Alaska, in the shadow of North America’s highest peak — Mount Denali. He meets up with a pilot who shows him the impact climate change is having on a nearby glacier before going caribou-hunting with native Americans and hearing about plans to drill for oil in a local nature reserve. Reeve then crosses the border into Canada, where he learns about the social problems and environmental devastation taking place in a country that shows a different image to the world.

In 1841, cabinet-maker Thomas Cook founded a travel agency that became famous around the world. Then, last month, after nearly 180 years, it ceased to be, leaving 21,000 workers wordwide without jobs, and 600,000 holidaymakers stranded abroad, triggering the UK’s largest peacetime repatriation. The collapse of the business came after the British government refused to fund a £200 million gap in the company’s finances. As the title suggests, this quickly made documentary charts how Thomas Cook became a leading force in the travel agency world and offers insights into the reasons behind its demise.

Brendan Grace: Thanks for the Memories
Sunday, RTÉ One, 10.35pm

In a welcome repeat from last Monday, this documentary follows the late Brendan Grace as he embarks on an ambitious project: to stage a big variety show featuring the Forget-Me-Nots Choir, made up of people suffering from dementia along with their friends and family. The choir had long been a passion of Grace’s, and he rerecorded a version of his hit The Dutchman with the choir last year. This three-part series documents the process of putting on the show, but soon morphs into a poignant look at Grace’s final months as he succumbed to cancer. The result is a fitting farewell to one of Ireland’s favourite entertainers.

No Fixed Abode: Life and Death Among the UK’s Forgotten Homeless
10