Mark Cagney breezes through the storm on his return to radio 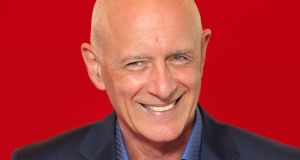 Mark Cagney: Having exited his longtime role as host of Virgin Media’s television show Ireland AM, he has recently been popping up on Newstalk, in this instance as a stand-in for Ivan Yates. Photograph: Colin Keegan/Collins

With much of last week spent in expectation of the coming storm, intense speculation about its impact dominates conversation on the airwaves. There are reports from areas likely to be hit hardest, and discussions about the scale of the devastation that might follow. In other words, it’s business as usual for Brexit, as the interminable farrago continues to overshadow everything else. Even the impending arrival of an actual storm is unable to knock the UK’s ongoing brain fart off the headlines.

On Tuesday’s Morning Ireland (RTÉ Radio 1, weekdays) newsreader Brian Jennings informs listeners that “RTÉ news is broadcasting a day of Brexit coverage, looking at how people in Ireland could be affected”, a statement which could apply to any day over the past three years. What apparently differentiates this particular day is that the news department has special reports across the network on “all things Brexit”, an incongruously jaunty phrase with all the enticing appeal of “all things root canal”.

Accordingly, anchor Audrey Carville broadcasts from the border between Derry and Donegal, talking to locals about the Brexit effect. Interestingly, opinion seems divided on generational lines as much as on the usual tribal differentiations. While students Tegan and Niamh fear their futures are damaged, farmer Davy Crockett, whose family land is divided by the Border, is sanguine in a “seen it all before” way. “We’re prepared for Brexit, maybe not everyone else,” he chuckles. But, like all Brexit vox pops and analyses, the report operates mainly in the realm of conjecture.

Meanwhile, as Storm Lorenzo is downgraded from hurricane status, it receives relatively cursory coverage on Morning Ireland in the run-up to landfall. This is despite the efforts of environment correspondent George Lee, who adopts his most sombre end-of-days tone as he updates listeners on the storm’s progress. But then, the vagaries of even the most unpredictable weather event seem positively commonplace compared to Brexit.

There’s a far more stimulating discussion on Lorenzo over on Wednesday’s edition of The Hard Shoulder (Newstalk, weekdays). Its interest, however, lies less with the storm itself than with the jolly interaction between guest host Mark Cagney and Met Éireann’s Evelyn Cusack. The meteorologist is outlining the storm’s possible path when she is interrupted by an otherworldly noise in the background.

“That’s not coming from us, is it?” Cagney asks. “That’s my phone,” Cusack replies apologetically, adding that her ringtone is the theme from the movie Alien. Cagney delights in this, calling it a “lovely little insight” into his guest’s character. “I am kind of a sci-fi buff,” says Cusack. “Weirdo is what I was thinking,” comes the host’s gallant response. But Cusack is unfazed. “I’ve been called worse,” she says, before returning to the storm.

It’s an enjoyable interlude, certainly more entertaining than Cusack’s appearance on News at One (RTÉ Radio 1, weekdays) during which she is earnestly but fruitlessly pressed by Claire Byrne into making grim predictions about the brewing storm. But its most telling insight concerns Cagney. Having exited his longtime role as host of Virgin Media’s television show Ireland AM, Cagney has recently been popping up on Newstalk, in this instance as a stand-in for Ivan Yates.

Cagney sounds like he’s enjoying himself immensely, which is perhaps odd, as he tells listeners that he had a “lousy day” on Tuesday. He reveals he’s just lost a family pet, a dog named Elvis, who had been put down because he was “blind, deaf and incontinent”. (The real-life Elvis wasn’t in great shape at the end of his life, either.) Cagney has a lump in his throat as describes his family’s upset and his “dad guilt” at being unable to do more. “I felt inadequate.” It’s a personal anecdote, but also acts as an on-air conversation starter.

All in all, Cagney’s reappearance on the radio is a small triumph

Cagney is also comfortable dealing with topical issues. True, compared to the more combative Yates, Cagney takes a more emollient approach when he discusses the housing crisis to People Before Profit TD Richard Boyd Barrett, even quoting Karl Marx’s dictum about history repeating itself as farce. But there is genuine disgust when Cagney discusses the appearance of racist stickers in Killarney (“the motivation is despicable”), while he sounds engaged when speaking to reporter Barry Whyte about the mood of “celebration” in Oughterard after the withdrawal of the tender for a direct provision centre in the town.

All in all, Cagney’s reappearance on the radio is a small triumph. Though his style has the insistent lightness of a daytime TV presenter, his nous and humour stop him sounding too slick. Unsurprising, really, for a host whose late night music show on 2FM in the early 1980s had a cult following. Irish radio may not need any more middle-aged male presenters, but Cagney is a fine, if temporary, replacement for an existing one like Yates.

The other rumbling story of the week, the situation in Oughterard, is the focus of Sean O’Rourke’s attention on Tuesday (Today with Sean O’Rourke, RTÉ Radio 1, weekdays), when he talks to local businessman Rory Clancy, who campaigned against the proposed centre. Clancy talks about the direct provision system being inhumane for asylum seekers – he says he would welcome people if properly housed – as well as his “relief” at the abandonment of plans to establish a centre in the town.

O’Rourke, however, pushes his guest on the protests surrounding the plans, saying the hotel owner has been “bullied off the site”, pointing to rubble blocking access. Clancy retorts that the local community are also “victims of bullying”, but O’Rourke persists. “Do you know how the rubble got there?” he asks finally. “I don’t, no,” replies Clancy. “Of course not,” O’Rourke says, his tone so pointed that he then has to clarify that he isn’t implying his guest put the rubble there. Never mind Lorenzo or Brexit – O’Rourke in full force is the stormiest thing on air.

Radio Moment of the Week: Tree is the magic number

As Storm Lorenzo hits the country on Thursday, Morning Ireland host Gavin Jennings talks to environmental expert Éanna Ní Lamhna about National Tree Day, which falls on the same day. “Didn’t we pick a great day,” she jokes. But Ní Lamhna gives a memorable interview, explaining how Ireland was partly deforested by Cromwell’s soldiers ( “they got rid of the trees and legged it back to England”) while decrying contemporary mass felling of trees: “We made some bags of it, didn’t we?” Finally, Jennings asks his inimitable guest if she would take schoolchildren out to see our trees. “I wouldn’t take them out today, because I’m not an eejit.” Wise woman.

Who will win the International Dublin Literary Award 2020
7