Ticket Awards 2017: The best television of the year 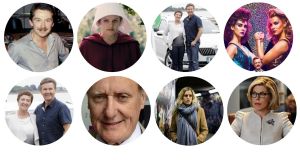 Our critics have picked their favourite TV shows from 2017 and now it’s over to you. Click on irishtimes.com/ticketawards to vote for your favourite televisual moments from 2017. If you think we went off-script, nominate your pick in the space provided at the end of each category online. We’ll publish the results in two weeks and you’ll be in with a chance of winning one of our prizes.

It’s not just about TV, though. Check out our cultural picks across books, music, art and film.

Watching TV in 2017 was the easiest and most cost-effective way to time travel. Back and forth we went, like a pendulum, between how we got here and where it might all lead.

For An Klondike’s excellent and award-winning second season on TG4 we tunelled back to the late 19th-century where the past kept getting dirtier. The Connolly brothers’ new enterprise was to set up a wash house, but none of the gamblers and cheaters here could get too clean.

The future hardly seemed like progress. Still reeling from regressive political steps, an audience found in The Handmaid’s Tale not just an extrapolation of all possible fears in its dystopian near future, adapted from Margaret Atwood’s novel, but a uniform of resistance. When the red robes and conical white bonnet of Elizabeth Moss’s reproductive slave Offred began to appear in genuine political protests, from Houston to Warsaw, over reproductive rights and presidential visits, the show ricocheted around the world.

Women became a dominant force on the screen, from the new power players in Game of Thrones or an eventual alliance against aggressors in the dreamily-affluent Little Big Lies. In Netflix’s appealing 1980s’ wrestling comedy GLOW, a female ensemble were “wrestling with their own female stereotypes” and doing it on their own terms. Even the emergent savvy figures among David Simon and George Pelecanos’s gorgeously grimy evocation the 1970s’ porn industry were women in The Deuce. Still, in a time of misogynist politics and a year of earth-shaking pushback, it’s hard to think of a show that chimed as much with the moment as The Handmaid’s Tale.

Visually, few were as inventive with the medium as Legion, on Fox UK, for which the staggeringly gifted Noah Hawley (who also turned in an absorbing third season of Fargo) took a lesser known X-Men character – a schizophrenic with psychic powers – filtered his mental straits through 1970s’ tones, shape-shifting narratives and unsettling wrong-footing logic, and still ended up with something infinitely more accessible than Twin Peaks: The Return.

Alison Spittle’s scabrous sitcom Nowhere Fast was as encouragingly fearless, lacerating big-town hypocrisy and small-town rivalries, even as it imagined its character in a downward spiral. Irish standouts this year were more factual than reality – even if Daniel and Majella’s B&B Roadtrip provided a fascinating glimpse of Irish obsessions.

Without the budgets or waterproofing for BBC’s astonishing Blue Planet II, a significant new contribution to the world, RTÉ documentaries focused instead on what could be discovered with an investment of time and scope. Portrait of a Gallery took a probing look at architecture and art and served as a valid act of criticism, while others were compassionate and genuinely informative, such as Autism and Me and Schizophrenia: The Voices in my Head.

Like our favourite show this year, The Deuce, they deepened your understanding. Admittedly, the explorers in The Deuce thought they’d seen everything, and wondered what people of the future would watch. The answer, it turns out, was them.

Dating Amber: A story about two gay teenagers, being each other's beards
2

‘There is something very cool about Irish people’
4

Nick Cave: ‘As long as I can remember I’ve had a pre-disposition toward violent thought’
Real news has value SUBSCRIBE