Do you know about all the Irish connections in Peaky Blinders? 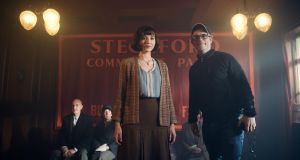 The new season of Peaky Blinders has lived up to expectations. The fourth season’s opener was a quintessentially Peaky episode, with meat hook attacks, major character deaths, a noose near miss, killer tunes and a classic line: “Pull a gun on Linda if you have to. Merry Christmas.” What’s not to like?

This season, the Irish-American contingent are in town for some Goodfellas-style action, with a slew of new characters to rustle up more trouble for Tommy Shelby, played by Cillian Murphy. Aidan Gillen appears as Shelby ally Aberama Gold, while Adrien Brody joins as mafia boss Luca Changretta, in town to avenge his brother and father’s deaths. Then there’s Charlie Murphy as Jessie Eden, a champion for equal pay in the Shelby factories.

It’s another boon for Wexford-born Murphy, after her breakout role in RTÉ’s Love/Hate led to a string of jobs in high-profile BBC shows such as Ripper Street, The Village and Happy Valley.

“Love/Hate feels like a lifetime ago, but it’s definitely in my bones,” the 29-year-old says. “I felt like I grew up during its five years. It was a brilliant environment to take risks and make mistakes, without having to be nervous as a young actor who was starting out. Over the five years I changed, and learned so much.” Equally, her Love/Hate character Siobhan, Nidge’s niece, developed from victim to protagonist – and it’s this strength we see with Peaky Blinders’ Jessie Eden. The character is based on fact: back in 1931, the real Jessie led 10,000 women to strike for a week, after rising as a key figure in England’s general strike of 1926.

“Judged by today’s terms and especially back then, her bravery was pretty phenomenal,” says Murphy. “History had mostly forgotten about her, so delving online and going down little rabbit holes to find out what she achieved, then weaving it together, the fact and fiction, was fascinating to me. The subject matter was fascinating too, given that a shocking disparity in pay is still there today. That’s always a bonus, to send a message that you believe in.”

This portrayal blends into the traditional love-interest role. Although she can’t discuss the expected trajectory, she says the sparring between Shelby and Eden will continue.

“She’s intelligent, so she’s done a lot of homework on him, and delved deeper into his past than a lot of people before,” Murphy says. “He’s an infamous character but she knows a few things that are chinks in his armour.”

The role partly came about because David Caffrey, the director of Love/Hate, is at the helm for season four of Peaky Blinders (it rotates directors each series). Caffrey also helped bring across other ex-Love/Haters, including Cathal Watters (director of photography), Stephen Daly (production designer) and Gillen. They join a cast in which the Irish are already well represented, with the likes of Cillian Murphy and Belfast man Packy Lee.

Lee has played Tommy’s right-hand man Johnny Dogs since Peaky Blinders first aired in 2013. “The likes of David, Charlie, Aidan and Adrien had a massive impact – when you’re adding names like that, it’s a buzz,” he says. “I think this series is the best yet. We’ve all upped our game, and Cillian’s in the forefront of that, leading by example. I’m really proud of it. It hasn’t been an overnight success; it’s taken us five years to get this far.”

How is it to be directed by a new creative each season? “It’s very different. In every series, there’s always the moment when you see how the director works and what they bring to the show,” Lee says. “I spoke to the producers about it, and they said that directors audition, just like the actors, which helps to make sure it’s a good fit.”

Heavier around the action

Wicklow-born Caffrey was initially considered for the second series, but knee-deep in Love/Hate, he couldn’t return the interest. He met with the executive producers for the third series, but was told he wasn’t right for that season. “So I thought that was that,” Caffrey says. “But then they came to me and said that season four is the one I’d be perfect for. I read the script and thought it was because it had a harder edge and it’s heavier around the action.”

He also had a unique selling point that came into play as expectation rose: he had proved he could make strong drama on a national broadcaster’s budget. “When Peaky started out, they had great ambitions for it. When the second season came, those ambitions got slightly bigger, and then the same happened for the third season,” Caffrey says. “With this one, they were doubly ambitious, and wanted an amalgamation of all the good stuff from the first three but on the same money. Now, the show competes with big period dramas like Game of Thrones and The Crown, which have five to 10 times the budget.

“That comes with its own pressures. That’s why I surrounded myself with people I’ve worked with in the past with not a huge amount of money, people like Cathal and Stephen [Daly] who put a phenomenal amount of toil and sweat into their work.

“I’m not complaining, I slightly revel in punching above my weight,” Caffrey adds. “It’s clever production work, to try and shift things so there’s value for money. As a director, you have to be aware of budgetary restrictions. You can’t be Charlie Big Potatoes, demanding things. So with a bit of ingenuity from you and your team, you can take everything that’s on the script and put it on screen.”

Over its three series, Peaky Blinders has earned several famous fans among its loyal followers. Here are just a few who’ve confessed their love of the Brummie drama.

The author is a known fan – he tweeted: “watching a cool British series called Peaky Blinders,” and later praised the long-form nature of its storytelling. Writers, eh?

The hip-hop star is such a fan he asked to meet the show’s creator and writer Steven Knight during a UK visit. Knight recalled: “My agent got a call saying Snoop’s coming to London, he wants to meet two people, and you’re one of them.”

Along with Brad Pitt, Steven Spielberg and Tom Cruise, Roberts is reported to be another fan in Hollywood. With rumours of a film version swilling, she may have already put her name in the flatcap. Executive producer Caryn Mandabach says: “We heard Julia Roberts wants to do it…but I don’t really know for sure.”

Soon before he died, Bowie reached out to Cillian Murphy and offered his music for season three. “He sent a photo of himself to Cillian with razor blades in his cap,” says Stephen Knight. “I got in touch with his people who came back straight away and said he was a big, big fan.”

Peaky Blinders is on Wednesdays on BBC Two at 9pm