The Great: Blackadder meets Downton romp not as clever as it thinks it is

TV Review: Elle Fanning is arresting and Nicolas Hoult has fun too in this self-declared ‘occasionally true story’ 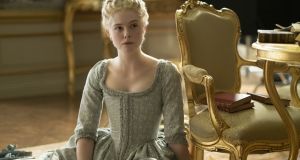 Ingenue with a heart of iron: Elle Fanning as Russian empress Catherine in The Great. Photograph: Ollie Upton/Hulu

When The Great (Channel 4, 9pm) debuted on US streaming service Hulu over the summer it was proclaimed a brilliantly irascible retelling of the rise of Russian Empress Catherine the Great. Granted, it played fast and loose with the historical record. But this, it was agreed, was more than compensated for by its devastating insights into how power is accumulated and wielded. And by the zinging chemistry between Elle Fanning as the glamorous young Catherine and Nicolas Hoult as her husband, Idiot-Emperor of all of Russia Peter III

It’s easy to why the series created such a splash. Fanning is arresting as an ingenue with a heart of iron, though her performance does at moments feel like a cover version of Kirsten Dunst in Sofia Coppola’s Marie Antoinette (which reframed the French Revolution as punk rock operetta).

Hoult is clearly having fun too. However, his portrayal of Peter as spoiled dolt carries a familiar whiff and the entire edifice of The Great wobbles the instant you work out that he’s doing an updated impersonation of Hugh Laurie’s Prince George in Blackadder the Third. Hulu has essentially grabbed Richard Curtis’s Regency romp by the ruffs and given it a prestige makeover.

The Great was written by Tony McNamara, who similarly fed European royalty through a comedic blender with his Oscar-winning The Favourite (co-written with Deborah Davis). That film positioned Olivia Colman’s Queen Anne at the centre of a love-triangle involving Sarah, Duchess of Marlborough and the Duchess’s younger cousin Abigail, Baroness Masham. Some of this was based on fact; lots of it was wildly speculative.

The Great takes much the same approach, declaring itself at the outset “an occasionally true story”. Certainly nobody involved has strained a sinew attempting to truthfully depict 18th century Russia. The Great was shot largely in Kent and Hertfordshire – as was The Favourite – and goodness does it feel like it.

This being an American-made period drama, everyone naturally speaks in the best Rada tones. That is, of course, preferable to the stereotypical “Russian” accents so beloved by Hollywood. Yet it has the effect of reducing the entire endeavour to Downton-on-Don. Adam Godley’s Orthodox Archbishop “Archie” (oh god), for instance, comes across more like a cross vicar miffed that he wasn’t invited to croquet than as cunning spiritual advisor to the Emperor.

Nor is The Great nearly as clever as it thinks it is. Hoult stays in the same key throughout: he’s a sex obsessed man-brat and that’s it. And little is made of the cultural disconnect between Catherine’s native Prussia – her German background is glossed over – and the alien world of the St Petersburg court. There are occasional references to Russia’s disastrous war in Sweden, much as there is an occasional shot of an onion dome twinkling in the background. But The Great never feels like it’s taking place anywhere other than in a British costume caper theme park.