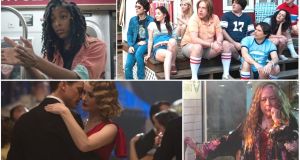 Pick of the summer streams

Summertime is traditionally a wasteland for original programming, with all the best new shows stored up for winter hibernation. Summer is usually reserved for repeats, sport and unremarkable fluff sneaked in from the graveyard shift while everyone is on holiday.

But streaming services and on-demand viewing means new programming doesn’t have to take a siesta in the summer. With Netflix and Amazon Prime there’s a clutch of binge worthy shows ready to rescue viewers from this normally bleak period so you don’t end up accidentally getting sucked into 15 episodes of Supervet and dissolve into a giant tear as a budgie from Bradford gets its wing restored using a tiny matchstick crutch.

More of a pot-boiler then a fine-boned cerebral puzzle, it’s the type of show where characters make half soliloquies and grand pronouncements at the drop of a top hat, if they’re not speaking out of the cigar-plugged side of their mouths like would-be Marx Brothers. It may be over the top but the sumptuous sets and styling somewhat make up for its overblown sensibilities and comically overt symbolism. It’s a welcome, pleasing diversion from the more celebrated over plotted, brooding shows of this era of so-called “prestige” TV.

Possibly the most intriguing prospect in this summer of streaming is the Netflix movie The Incredible Jessica James. It stars Daily Show correspondent Jessica Williams as a young New York City playwright who is attempting to realign herself after a bad breakup and ends up stumbling into a potential new relationship with sparky older man app designer Chris O’Dowd.

Williams’s character is a crush-worthy modern rom-com heroine, bluntly telling her blind date about her romantic turmoil and bringing a handwritten anti-patriarchy booklet to a baby shower to a sea of pitifully blank faces. There is no outward flirtatious cutesiness or stuttering Annie Hall quirkiness about her. Instead she brims with with self-confidence and snaps at O’Dowd’s character’s profession of affection for her, by telling him that she knows she’s “friggin’ dope”. She offers a freshness and exuberance in line with the exciting new breed of relatable, flawed but fierce rom-com leads such as Jenny Slate, Aziz Ansari, Issa Rae and the much-maligned Lena Dunham.

A parody of the all-American teen stoner sex- romps, critics mauled it upon its initial release. But it picked up an underground audience as well as plenty of celebrity fans. This inspired Netflix to make a prequel in 2015 – Wet Hot American Summer: First Day of Camp. It brought the original cast back together but with a ludicrous twist – they were playing even younger versions of their former characters. (The stellar cast was also expanded to include Chris Pine, Jason Schwartzman, John Hamm and Kristen Wiig. )

Most will return for this new series set in 1991 with the misfit group reuniting for a Camp Firewood 10-year reunion but the threadbare plot isn’t really the point. Much like your average Will Ferrell vehicle, the show is all about the quotable set-pieces, which include Paul Rudd stomping about harassing teens in a full luxurious hair-metal wig, Schwartzman twirling around to the sounds on his Sony Walkman dressed head to toe in dayglo, and Kristen Wiig giving a full unhinged Barbie doll performance. Sometimes you get the impression that the cast may be having a better time than the audiencem but it’s still an enjoyably brainless, midnight snack of a show.

Chuck Lorre’s highly anticipated stoner sitcom Disjointed stars the formidable Kathy Bates, who plays Ruth, a tousle-haired Janis Joplin-esque proprietor of a Los Angeles cannabis dispensary. The series follows her, and her entrepreneurial son and a trio of “budtenders” as they navigate the brave new world of legal and medicinal marijuana use.

This is Lorre’s first partnership with Netflix. having all but revived network sitcoms with his critic-proof smash hits Two and a Half Men, The Big Bang Theory and Mike & Molly.