Television: Say hello to the family of friendly spies next door

Struggling through the sixth series of ‘Mad Men’? ‘The Americans’, with Emmy-worthy performances from Keri Russell and Matthew Rhys, could be just what you need 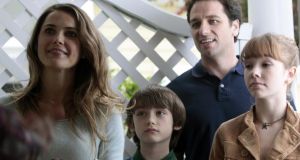 Nothing is quite what it seems in The Americans (RTÉ Two, Thursday; UTV, Saturday). For a start, the couple at the centre of this addictively watchable suburban-spooks series aren’t even American. Phillip and Elizabeth Jennings, played by Matthew Rhys and Keri Russell, are Russian spies, planted in Washington DC in the 1980s. Nor is their marriage the loved-up coupledom it appears to be. Last week’s pilot episode flashed back to mother Russia, complete with bad accents and uniformed chaps laden with medals introducing the two young idealists and signing them up for life.

As deep-cover KGB operatives they run a travel agency. (Secret agents as travel agents: oh, those jokester Ruskies.) By day they’re Mr and Mrs Average, with their two all-American children; by night, though, they’re experts at fulfilling orders from Moscow, whether that’s getting a wig on – the Jennings own a lot of wigs – and duping a Washington insider into spilling the beans, or hiding a Russian traitor in the boot of their car before murdering him.

During that scene it was best not to wonder if their children might be the least inquisitive youngsters on the planet. They never seem to wonder where their parents go every night. Or why that knocking and Russian-accented cry for help were coming from the garage.

Just as things are beginning to change for the Jennings, and their arranged marriage begins to seem real, Phillip starts to think he’d like to give up the spy life, because the US isn’t so bad after all, which makes Elizabeth go all flinty-eyed and tight-lipped as she reminds him about his allegiance to the motherland.

Ronald Reagan is in the White House, Russia is the big enemy and an FBI operative has moved in across the road. Stan Beeman (Noah Emmerich) looks like a backyard barbecue expert with a pen-pushing job at the J Edgar Hoover Building, but, as we soon see, he’s a ruthless and deeply suspicious spy-hunter. So the cat-and-mouse story arc is set up, underpinned by bigger questions of love and loyalty.

This week’s double episode on RTÉ threw in some tantalising curve balls, including the arrival of their new KGB handler, Claudia (Margo Martindale) – and it’s the 1980s, so there’s plenty of retro spy paraphernalia, such as teeny cameras, bugs hidden in clocks, reel-to-reel recorders and ads in the classified section of the newspaper. Much more fun than mobile phones.

This isn’t something to while away your time before Homeland, that other spies-in-suburbia drama, returns for a new run. It’s more for Mad Men addicts who are struggling through the very mixed sixth series, on Sky – Don’s midlife crisis is, it turns out, as boring as anyone else’s – and are looking for a slick, well-crafted replacement.

The Americans has been recommissioned for another series – not surprising – but a third series of Person of Interest (RTÉ Two, Monday) is in the works, which is astonishing. This paranoia-fuelled drama shows that a great idea doesn’t necessarily produce a great TV series. Working for the US government in the wake of 9/11, a techno-whizz, Harold Finch (Michael Emerson), develops the ultimate cybersnooping technology, which can read and analyse all forms of electronic data, from security cameras to text messages.

The meek limping geek, now a reclusive billionaire, enlists the help of an ex-military mystery man, John Reese (Jim Caviezel) to be his muscle and intercept the criminals. But there’s a cop on Reese’s tail, a wide-eyed Lois Lane to his Superman who explains each week’s thin plot as we go along. It’s as if the producers, worried that all the gizmos and data-gathering might confuse the slack-jawed audience, opted for a script structure and dialogue that are almost laughably simplistic. Even fine actors such as Caviezel and Emerson can’t elevate Person of Interest above the mediocre.

Colin Stafford-Johnson’s The Secret Life of the Shannon (RTÉ One, Sunday), was a stunning documentary, with world-class photography from its director, John Murray, and his team. Instead of following the river from source to sea, or taking an even more prosaic county-by-county approach, the naturalist set out to explore wildlife both under and above the water, and to capture the spirit of our longest river. It felt as much a mystical journey as a fact-finding one. The two films in the series were full of set pieces of nature at play, captured with sophisticated filming techniques: red squirrels jumping like acrobats from tree to tree; prehistoric-looking crayfish mating on a riverbed that looked like the surface of the moon; and whooper swans, their flight a compelling combination of muscular power and balletic grace, touching down on the river after a long journey.

Stafford-Johnson’s presenting style is curious, though. We saw him paddle down the Shannon in a canoe and walk on sun-dappled riverbanks and through forests, and we heard him deliver his low-key, off-camera commentary, but he’s a bland, almost apologetic presence. And every scene was overlaid with an intrusive soundtrack, as if the wildlife had no sound of its own. When we did hear any noise from the creatures we were seeing on screen, such as the astonishing shots of swarming starlings, it was a welcome relief. Stafford-Johnson remarked on the sound “of the myriad beating wings” – but only for a minute, before yet another Kíla track barged in and fought loudly for our attention.

The music competed with rather than complemented the visuals, so for long stretches The Secret Life of the Shannon was best watched with the sound down, to luxuriate in the photography. “It’s better not to analyse these things too much. It’s better just to sit back and enjoy,” said Stafford-Johnson of the starlings flying overhead. Lovely if you’re listening to them in nature; less lovely if the music seemed determined to drown out the Shannon’s magic.

Fintan O’Toole on Jonathan Swift: a moral giant and founder of Anglo-Irish writing
4

The Europeans No. 13: Daniel O’Connell
8

Who will win the International Dublin Literary Award 2020
9

What in the world is abstract art about?
10

Nicole Krauss: end of a marriage is ‘terrifying but the freefall is exhilarating’
Real news has value SUBSCRIBE