Television: ‘Doctor Foster’ is a bit clunky, but at least it’s not a period romp 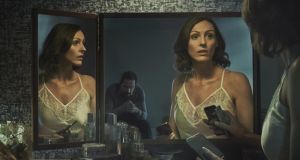 Reflections on a marriage: Suranne Jones and Bertie Carvel in Doctor Foster

What does a sensible, smart, in-control brunette do when she spots a long blond hair on her husband’s scarf? Why, jump to the conclusion that he’s having an affair, of course. The obvious thing to do next is tell her colleague and the woman across the road. And Google “cheating husband”.

So you live with that character inconsistency for a while, because Doctor Foster (BBC One, Wednesday) is a contemporary five-part drama – a relief from all the period romps – and the main character, the doctor, is played by Suranne Jones, who has form when it comes to creating vivid, real characters, DS Bailey in Scott & Bailey among them.

The background is established with deft economy. The Fosters are a happily married suburban middle-class couple in their late 30s with one child. She’s a doctor and the head of her own large clinic, he’s a surveyor turned property developer. They have family photos on their large stainless-steel fridge, they have an SUV, they have dinner parties. Then that blond hair.

What could have been an interesting exploration of relationship and infidelity – a subject that never gets old – soon turns into a unconvincing yarn, lined with stereotypes and clunky plot devices with all the believability of a beach read.

One of Dr Foster’s patients is a young black street-smart woman who comes to the surgery to blag prescription drugs. For reasons known only to the drama’s scriptwriter, Mike Bartlett (who mustn’t have read the General Medical Council guide and, worse, appears not to know much about female relationships and their subtle but clear boundaries), Dr Foster also tells her of the suspected infidelity.

The young Miss Marple on benzos does indeed discover him in a clinch with a young blonde. Several more sleuthing and dodgy doctoring scenes later, Dr Foster is no one you can believe in, and episode one ends with a close-up of her face while, in a piece of signposting that’s so lazy it’s pure corn, a plummy voiceover intones Congreve’s line that “hell hath no fury like a woman scorned” – or, indeed, like one who has wasted an hour watching this.

You don’t hear much about DH Lawrence these days, and I suspect one reason that Lady Chatterley’s Lover, the once-banned novel that for years was a literary byword for raciness, got the green light for yet another screen treatment is that the Chatterleys could easily be the Crawleys’ racier neighbours who live a few grand estates over from Downton Abbey.

Written by Jed Mercurio (Line of Duty), the lush-looking and beautifully dressed Lady Chatterley’s Lover (BBC One, Sunday) opens with a pit disaster that even my vague memory of the book tells me is an invention. Although books can never, and should never, be moved line for line to the screen, it does make me wonder what else is invented for dramatic effect.

The basic plot is the same: a peasant-hating lord comes home from the first World War impotent and in a wheelchair, so m’lady has it away with his gamekeeper, Mellors. The social order is disturbed – the cruel and damaging British class system is a key theme of Lawrence’s work. Predictably, all the servants are lovely and the toffs nasty. Talking about the servants, in their presence, Lord Chatterley remarks to his wife that “it’s not as if they’re people”.

Lawrence was heavy handed with the symbolism, and this adaptation follows suit, although on screen the lack of subtlety gets wearing, the pale, impotent, pit-owning lord who exploits and kills the honest working man in the name of greed and progress versus the hairy, brooding Mellors, with his rough clothes and little stone house deep in the forest.

By the time Mellors and m’lady get it together I’m more mesmerised by his firelighting skills than shocked by the pair of them breaking down class barriers or scandalised by the sex scenes.

That’s not a euphemism – one match on the pile of logs in the grate and giant flames light up the room. The swarthy Mellors also seems to have the string section of a symphony orchestra tucked away in the corner. Not much naturalism there, then. As beautifully made as Lady Chatterley’s Lover is, and with a terrific cast led by Holliday Grainger, James Norton and Richard Madden, it’s hard to see why they bothered.

One episode in and I’m not sure there’s TV gold in An Klondike (Tuesday, TG4), but you can’t fault its ambition and style (and that of its director, Daithí Keane), its solid acting and its faithfulness to the genre. A traditional old-fashioned western with the added curiosity of being as Gaeilge, An Klondike follows the story of the Connolly brothers (Owen McDonnell, Dara Devaney and Sean T Ó Meallaigh, leading a strong cast) from Ros Muc, who head to Alaska to make their fortune in the 1897 gold rush.

An old prospector returning home to Ireland has given them an Indian treasure map, and by the end of the hour-long first episode (there are four) they have met a Native American to help them decipher it. So, after several mishaps and scrapes – mostly caused by amadán brother Seamus – things are looking up.

They pass through the frontier town of Dominion Creek, a convincingly lawless and violent place of chancers, drinkers, fighters and schemers, where mournful come-all-ye’s are sung in the whorehouse and where it doesn’t take much for a fight to break out in the saloon. The saloon is owned by the fledgling town’s bad guy (Connolly’s future nemisis) and his wife – the only people in the town who look like they might have washed in the recent past.

Budgets didn’t allow production to move to Alaska, so it went west – to the Glengowla mines outside Oughterard, in Co Galway, where the production’s designer, Padraig O’Neill, created a convincing frontier town. The scenery around Connemara is believable as the undiscovered Alaskan wilderness.

Cut down for cinema release, An Klondike was the closing piece at Galway Film Fleadh this year – timed so that it might be eligible for consideration in the Oscar race for best foreign-language film.

Are we all Kantians now? The Covid-19 effect on moral philosophy
7 Family deals with its loss as serial killer still roams free
8