Radio review: Matt Cooper has a good day at the office. The health minister not so much 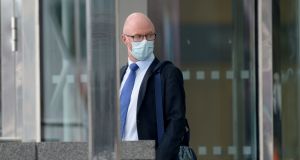 Minister for Health Stephen Donnelly was defiantly upbeat when he appeared on The Last Word. Photograph: Alan Betson/The Irish Times

With Dublin looking at being confined to base again due to surging coronavirus cases, it’s a good time for the capital’s inhabitants to come up with new pastimes.

Luckily, the radio appearances of various ministers launching the Living with Covid plan provide one possibility. As members of the government trot out the same buzzwords across the airwaves, listeners may end up playing a kind of mental bingo (pandemic catchphrase version). Anyone staying alert for terms such as “roadmap”, “levels” and “Dublin is still at level two, but with additional measures” will be shouting “House!” in no time.

That said, each minister brings their own distinct slant as they trumpet the plan against an increasingly farcical backdrop. Interviewed before feeling unwell and being tested for the virus (negatively, thankfully), Minister for Health Stephen Donnelly was defiantly upbeat when he appeared on The Last Word (Today FM, weekdays). Talking to host Matt Cooper, the Minister highlighted the praise the plan was garnering, from himself at least: “My sense is that this is broadly being welcomed,” he says.

Cooper is quietly merciless, pressing his guest whenever he thinks he’s dodging the issue, which is fairly often

Nothing can detract the Minister from this sunny outlook, not even the roadmap going off track as it starts. When Cooper asks if the framework is being “called into disrepute” with Dublin already at “level two with a twist”, Donnelly fudges.

“The question I guess is whether or not we continue to listen to the public health doctors, or do we have our levels,” he says, without quite clarifying which is being done. Thus the interview continues: the host grills the minister, who outlines the question he’d prefer to have been asked and answers accordingly.

Donnelly makes some salient points about the seriousness of the situation, noting that hospitalisations are doubling every fortnight. But too often his bulletproof confidence sounds like a corporate sales presentation.

In drawing attention to the voice, radio only adds to this impression, with the minister’s pronunciation of certain words - “realidy”, “deteriorading”, “communicaded” – bearing an unfortunate resemblance to the smooth mid-Atlantic patter of a daytime jock.

Cooper is, in turn, quietly merciless, pressing his guest whenever he thinks he’s dodging the issue, which is fairly often. “Are you going to cancel Christmas?” is a typical shot across the bows. Beyond that, Cooper’s discussions with sundry pundits on the confusion surrounding the plan is clear but damning for the Government. It’s a good day at the office for the host. The same cannot be said for Donnelly, though one sincerely hopes he feels better soon.

His ministerial colleagues display their own characteristics on Wednesday. Finance Minister Paschal Donohoe sounds a sombre but candid note when interviewed by Bryan Dobson on Morning Ireland (RTÉ Radio 1, weekdays). Rather than spinning frantically, Donohoe doesn’t flinch from outlining the difficult “consequences” of the more restrictive measures recommended for Dublin.

He prefaces his advice for a Dublin couple planning to get married elsewhere by considerately observing “I understand how important a nice wedding day is”, before deeming the nuptials a no-no. Ouch. Nor does he duck the question of Dublin’s Covid status increasing to level three. “There’s a strong possibility that could happen,” he says, in the “this-will-hurt-you-more-than-it-hurts-me” tone doctors use to explain unpleasant procedures to patients. Even Dobson knows he’s been outdone in the glum tidings department, leaving the minister unscathed.

Coming after all that, “superjunior” Minister Hildegard Naughton’s appearance on the Pat Kenny Show (Newstalk, weekdays) is undramatic, apart from being obliged to concede that Dubliners can now travel to Poland but not Donegal. Like the other interviews with politicians trying to appear in control of an impossible situation, it’s a no-win situation. But for aficionados of overused buzz terms, Naughton is a rich source, with appeals to “redouble our efforts” a particular favourite. Bingo!

Not that there are any winners at the moment. On Tuesday’s Liveline (RTÉ Radio 1, weekdays), Joe Duffy talks to Dublin publicans, or “Dublicans” (arf!) about the latest delay to reopening “wet pubs” in the city.

Their frustration and disillusionment is obvious, as they point out that such bars would operate under the same guidelines as the rest of the hospitality sector, only without food: Ronan Lynch, whose reopened pub now serves pizza, says he runs his place “like a drill sergeant”. Daniel Smith, whose pub remains closed, is also aggrieved that the government’s “clear plan” is already muddied by the capital’s uncertain status.

“Dublin is level two and a little bit,” Duffy says, helpfully. “But that’s not one of the levels, Joe,” says Smith, in one of the most Liveline replies ever. His despair is palpable, however. “There’s people whose livelihoods depend on this,” he says. Even teetotalers might feel sympathy.

Official caution is targeted by Kieran Cuddihy as he opens the Hard Shoulder (Newstalk, weekdays). The presenter excoriates the government for an unwillingness to take risks, the consequence of which is businesses being shuttered and hospital waiting lists soaring. It’s a valid argument, but things take a more uncomfortable turn when Cuddihy criticises Tánaiste Leo Varadkar for using “the kind of language that reinforces the idea that one death from Covid is one too many.”

“This is an awful thing to say, but that’s not true,” the host says, his voice rising half an octave. “There’s an acceptable figure for deaths from Covid, and it’s not zero.” Perhaps wisely, he doesn’t put a figure on how many people can safely die before the government acts.

Cuddihy may just be perpetuating the self-consciously controversial style so beloved of his slot’s previous incumbents, but unwittingly or not, there’s a deeply chilling undertone to his language. If things continue in this direction, any roadmap is preferable.

On Wednesday, Pat Kenny is upbraided by former British government adviser Alastair Campbell for referring to the UK’s prime minister as “Boris” rather than using his surname. “Are you still calling him that?” Campbell asks sharply. Use of the first name is part of Johnson’s “shtick”, Campbell says: “It makes him sound a whole lot more cuddly and pleasant than he actually is.”

But while his assessment that Johnson’s cabinet consists of “cowboys, gaslighters, charlatans and liars” rings true, one also recalls Campbell worked for Tony Blair, who as premier enthusiastically joined the 2003 Iraq invasion but whose chummy mantra at meetings was “Call me Tony”. Conclusive proof, perhaps, that it’s safer sticking to “yes, prime minister”.

The Climb review: a big-hearted crowd-pleaser in the name of love
8

The Guyliner: Rebecca is my favourite novel, so why do I hate everyone in it?
9