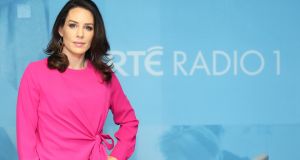 Sarah McInerney: reserves her most fierce grillings for those in positions of power or wealth who appear to be spoofing

It’s the second week of her new show, and Sarah McInerney is already on course to become the most-respected figure on the radio. So tenacious is the presenter’s interrogatory technique on her programme (Today with Sarah McInerney, RTÉ Radio 1, weekdays), that battered guests begin their answers with the same frustrated refrain: “With respect, Sarah … ” If she continues receiving professions of deference at this rate, she’ll know how it feels to be a mafia don.

McInerney’s tenure in the slot left vacant by Seán O’Rourke is as yet temporary. But the former Newstalk presenter has firmly placed her stamp on the slot as well as on those guests who have endured a mauling at her hands. Tuesday’s interview with Ryanair executive Eddie Wilson sets out McInerney’s template, as she allows her guest to set out their stall before zeroing in on a particular issue.

In this case the host takes issue with Ryanair boss Michael O’Leary’s claim that face masks prevent coronavirus transmission by 98.5 per cent, a figure she says isn’t used by any health authority. Wilson’s answer, after many water-muddying asides, is that O’Leary was quoting a tweet from the Mater hospital. “He could have checked with the World Health Organisation,” reprimands McInerney.

She then queries O’Leary’s scepticism about British plans to quarantine travellers for a fortnight, suggesting Ryanair is dismissing the advice of health experts. “What makes Michael O’Leary, and indeed yourself, think that you know better?” she asks sharply, prompting Wilson to deploy the defensive term “with respect”.

The phrase is again heard on Wednesday, in the first instance from Minister for Justice Charlie Flanagan. The Minister is interviewed about his apology over a Covid-19 outbreak at a direct-provision centre in Cahersiveen, Co Kerry. McInerney is forensic in her approach, quizzing the Minister over the apparent secrecy surrounding the contagion, but relentless too.

Regarding the suitability of the centre’s accommodation, she asks: “Would you have shared a room with anyone at the height of the pandemic?” Little wonder the flustered Flanagan eventually invokes the R-word as he attempts to reply to his host’s barrage of questions.

And so it continues. Developer Noel Smyth’s proposal for a new agency to streamline planning for post-pandemic construction is gently mocked by the host as a way to bypass “pesky consultation”. “You’re a developer, of course you’ll be calling for something that will loosen up the planning laws,” McInerney says. No wonder Smyth pleads respect when he replies.

At times McInerney’s interrogations are so sustained that her predecessor seems like a toothless chihuahua in comparison. The approach doesn’t always succeed, with the host sometimes honing in on particular details at the potential expense of the bigger picture. But her command of information is impressive, while the whiff of cordite prevents dullness setting in.

It’s also notable that McInerney reserves her fiercest grillings for those in positions of power or wealth who appear to be spoofing: politicians, developers, executives, banking representatives. (Among the last category is Brian Hayes of the Banking and Payments Federation Ireland, who gets so miffed at McInerney’s constant referrals to the 2008 State bailout that he peevishly observes that the “pillar banks” have returned €20 billion of the €30 billion they received, adding their “ambition” is to pay back the remaining money. Imagine how far you’d get filling out a loan application form so blithely.)

Otherwise, McInerney’s on-air manner is one of rigorous curiosity. She also shows off a more relaxed side, whether chuckling conspiratorially at hairdresser Lisa Eccles’ suggestion that parents cut their children’s hair while they sleep or asking film critic Paul Whittington which vintage Hollywood movie he would recommend for the weekend. When the latter suggests a thriller, McInerney’s reply sounds uncharacteristically sheepish: “I don’t like thrillers.” That aside, she seems fearless.

There’s little danger of things getting too serious with Jennifer Zamparelli (2FM, weekdays), though like the rest of us, she can’t avoid talking about the pandemic. This isn’t necessarily a given: back when Brexit devoured every moment of airtime elsewhere, larky shows such as Zamparelli’s were conspicuous exceptions. But even with coronavirus all-pervasive, the presenter views the crisis through a singular lens.

On Wednesday, Zamparelli talks to therapist Rachel Cooke about the apparent growth of “emotional cheating” during the outbreak, a practice involving raunchy communication with someone other than one’s partner. This follows the presenter’s revelation that the use of dating apps has increased as relationships fray during lockdown.

Zamparelli, whose delivery can resemble that of a worldly older sister dispensing life tips to an innocent sibling, is wary about blaming enforced ennui for such behaviour: “I get bored sometimes, but I’ve taken up baking.” Still, she thinks being stuck at home amplifies existing dissatisfaction, noting “it does shine a magnifying glass on things” – which is one way of creating some sparks.

The host’s conversation with Cooke is revealing in several ways, not least the guest’s different categories for open relationships, from “monogamish” to full-bore “relationship anarchy”. Who knew? As to what constitutes emotional infidelity, Zamparelli wonders if it boils down to “texting someone, but you fantasise about having that ride”. (Not quite – apparently secrecy and emotional connection are also involved.) The presenter’s zingy language aside, the topic is treated earnestly, but in truth it’s diverting froth, and none the worse for it.

Zamparelli doesn’t eschew more substantial topics. She talks empathetically with a mother whose special needs son is struggling with school being closed, and chats with tech journalist Adrian Weckler being “totally freaked out” on discovering her image was used without her permission in online scam advertisements for diet pills: a common enough practice, it seems. But somehow such items seem at odds with the show’s mission to entertain and divert, in Zamparelli’s unyieldingly buzzy fashion.

Even so, McInerney’s ongoing evisceration of public figures seems like more fun.

On Tuesday’s Drivetime (RTÉ Radio 1, weekdays), stand-in host Katie Hannon disregards WC Fields’s advice never to work with children or animals by talking to a seven-year-old animal lover who has received a letter from legendary wildlife broadcaster David Attenborough. In truth Hannon’s interview with Leitrim native Kameron Durcan is a joyful break from the grim news, as the young wildlife enthusiast recalls how he “literally exploded with excitement” when he got the letter, and explains that he’s been a vegetarian since he was three, so much does he love animals.

Hannon’s subsequent conversation with Kameron’s mother, Carol, is enjoyable too, not least their protracted attempts to bid farewell, akin to parents saying goodbye to each other at a school gate. Even the curmudgeonly Fields might have cracked a smile.