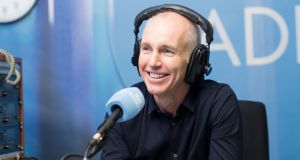 Ray D’Arcy is taking over the Saturday night slot 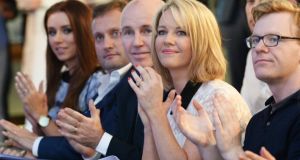 Bob Geldof on WB Yeats, David McWilliams on Ireland’s wealth gap and Joe Duffy reminiscing about Liveline’s “most memorable stories” will all feature on RTÉ screens in the months ahead.

RTÉ One channel controller Adrian Lynch has unveiled details of 53 new shows, either series or one-off documentaries, as part of the channel’s new season launch event in Dublin today.

New factual programming includes Recruits, which RTÉ says offers “unprecedented behind-the-scenes access” to training in the Irish Defence Forces, and Crumlin, a series filmed over eight months that looks at paediatric care from the point of view of the medical staff at Our Lady’s Children’s Hospital.

Garda Down Under will examine the lives of the gardaí who are now on the beat in Western Australia and Duffy will bring a “best of” his radio show Liveline to television screens in the six-part Call Back. Other documentaries include The Boston Nanny, the story of Irish nanny Aisling Brady McCarthy, Hidden Impact: Rugby’s Concussion Crisis and The Enemy Files, a “counterview” on the events of 1916 by Michael Portillo.

In the entertainment line, big money signing Ray D’Arcy will front The Ray D’Arcy Show on Saturday nights from next month and impressionist Mario Rosenstock switches from RTÉ2 to RTÉ One with a new studio show. The Voice of Ireland and Ireland’s Fittest Family will return to Sunday evenings, while Ryan Tubridy will be at the helm of The Late Late Show’s 54th season.

RTÉ One’s arts output has been “refreshed”, the broadcaster said. It will include John Kelly presenting weekly series The Works Presents... in which he interviews arts figures from Glen Hansard to Jennifer Johnston. As well as Geldof’s take on the life and work of the poet WB Yeats (a BBC co-production), rugby analyst Brent Pope will present a documentary on “outsider” art.

Other new arts programming includes the story of Irish design in Designing Ireland, Paddy Moloney: Chieftain and a programme about the 40th anniversary of the Druid Theatre Company.

In the lifestyle area, RTÉ will be presenting You Should Really See a Doctor, in which Dr Pixie McKenna and Dr Phil Kieran meet and treat people with a tendency to self-diagnose on the internet. There’s also a new science programme called Everything You Need To Know... and it’s nerves all round on a new series called One Week To My Wedding, which follows six different couples in the week leading up to their wedding day, as the title suggests.

No schedule could be complete without a smattering of cookery shows: Rachel Allen will join the fast-lengthening line of broadcasters to visit the Wild Atlantic Way in Rachel Allen: Coastal Cooking, while Donal Skehan will host Cook, Eat, Burn! - the “burn” referring to calories rather than food.

RTÉ One’s current affairs line-up will remain unchanged in the months to come, though its investigations unit has received a 50 per cent uplift in its budget to allow it to pursue more stories.

RTÉ bosses expect news programmes attract an increasing number of viewers in the lead-up to the general election. “We’re unusual as a public service broadcaster in having news and current affairs central to our schedule still,” said Mr Lynch. “But the appetite from viewers is there.”

Glen Killane, the managing director of RTÉ Television, said the new season marked the start of what would be an “exciting year”, with events such as the 1916 centenary and the election leading into a summer blessed with sporting ratings-grabbers Euro 2016 and the Olympic Games, to which RTÉ has the rights.

The schedule launched today includes the previously announced Sunday night dramas Clean Break, which will air this autumn, and the 1916-themed Rebellion, which will go out in early January.

Clean Break, a four-part series about a tiger kidnapping and its fallout in Wexford, has been produced for RTÉ by Love/Hate makers Octagon Films and 152 productions and is written by the playwright Billy Roche. It stars Adam Fergus, Aidan McArdle, Simone Kirby, Kelly Thornton, Damien Molony and Ned Dennehy.

Rebellion, a five-part drama set around the events of the 1916 Rising, stars Charlie Murphy, Brian Gleeson, Ruth Bradley, Barry Ward and Sarah Greene and comes from the makers of the Haughey serial Charlie.

The volume of drama is lower than has been in recent years, as RTÉ has been financial constrained by drops in licence fee income and a lacklustre television advertising market. This time last year, it was preparing to show before Christmas six episodes of the final series of Love/Hate and six of The Fall, the Belfast-set, BBC-produced show in which RTÉ is a minor funding partner.

Mr Lynch said RTÉ would be increasing its investment in drama next year. The former owner of the production company Animo, who joined Montrose last November, said RTÉ One was a “something for everyone” channel that had managed to keep its viewing share stable in 2015, despite the advent of new competitor UTV Ireland.

“Ratings are one way of judging an audience’s connection to a programme,” he added. “I think there’s lots of other things you judge it on, in terms of the quality, the impact. Certain programmes aren’t going to draw a substantial audience but they are made for a certain audience, and if that audience is enjoying them, that’s what is really important.”