Radio: Tubs gets the smell of abuse, Joe Duffy hears the ‘purpose of sexuality’ 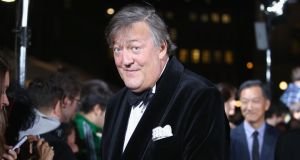 As someone who, in his 2FM days, once asked if deaf people were able to hear his show, Ryan Tubridy should be particularly aware that he works in a world of sound. So it seems foolhardy when he devotes a substantial chunk of airtime to the subject of smells on Tuesday’s edition of The Ryan Tubridy Show (RTÉ Radio 1).

Still, far from being a mis-step, Tubridy’s discussion of the way smell can trigger memories of sexual abuse is valuable, if not exactly enjoyable, as he warns from the outset: “It’s one of those shows today: not as light and frothy as it can be.”

The item comes in the wake of Stephen Fry’s comments that sexual- abuse survivors who say literary works awake painful emotions are self-pitying. In response the barrister John O’Callaghan explains that certain sensations can be a catalyst for people whose have otherwise shut such traumas from their mind.

Personal testimony comes from Siobhán, who as a child was abused by her uncle. She robustly rebuts Fry, pointing out the long-term damage caused by such crimes. “It doesn’t upset you just once,” she says, “it shapes you for a lifetime.”

Siobhán also describes how she now associates some scents with the abuse she suffered. Just to smell TCP disinfectant “is a huge challenge”.

Tubridy is supportive but not overly emotive. When Siobhán says her reaction to disinfectant is “strange”, the host quietly insists it’s anything but. Tubridy’s understated tone reflects Siobhán’s forthright attitude, which is anything but self-pitying.

Mindful of the potential for prurience, Tubridy asks Siobhán if it’s healthy to talk so openly about her dreadful experiences. “Hiding it under the rug was the old way,” she says. “If you can talk about something, you’ve a chance of fixing it.”

In the end it’s an item that not only broadens our understanding of a difficult subject but also highlights how effective radio is in these cases.

Not everyone thinks the old ways are necessarily bad, as Joe Duffy discovers on Tuesday’s Liveline (RTÉ Radio 1). Spurred by a caller’s complaint, Duffy talks to Fr Brian McKevitt, editor of the Catholic newspaper Alive, about an article on a study claiming that smacked children are more successful in life.

From the off it’s apparent that host and guest have previous form. “Hello, Joe. Nice to be speaking to you again,” the cleric says, not entirely convincingly.

Sure enough, the atmosphere soon becomes testy. McKevitt defends his right to publish the piece, based on a 2010 Daily Telegraph report. For his part Duffy stokes the fire, asking in faux-innocent manner about another article condemning, ahem, onanism. Again, McKevitt sticks to his guns, counselling against “fantasies” that “lead to this self-pleasuring”, which he says in turn results in “self-disgust”.

If it isn’t already apparent from such archaic turns of phrase, McKevitt says Alive’s mission is to challenge secularism, which he calls “the State religion”. He also wants to give people “a proper understanding of the purpose of sexuality”, which he says boils down to “the love between a husband and a wife”.

At a time when many clerics seek to tread with caution on such matters, it’s a jolt to hear a priest speak with such self-assured authority about an area that, one assumes, he has little practical experience of. Talk about the old days.

A succession of callers pile in to decry the “toxic” nature of the study. But the most striking voice is that of Lena, who says Alive was a “lifeline” when she was a young parent. She also freely admits to having smacked her children with wooden spoons.

As Lena’s arguments with other callers grow more heated, her assertions become more outlandish, and she assures the mother of a gay daughter that “homosexual tendencies” can be cured. Even Duffy is taken aback at this, gasping: “Oh my God.”

It’s breathtaking stuff, although the vitriol aimed at Lena becomes uncomfortable. The more she rages against “disordered behaviour” the less in control of herself she sounds. And it deflects attention from McKevitt’s widely circulated but decidedly retro assertions.

There are more high-pitched, barely coherent outpourings on Inside Culture (RTÉ Radio 1, Monday). But the voices in this case are good-natured, as the presenter and Irish Times contributor Fionn Davenport invites inhabitants of Florence to sing Largo al Factotum, the famously tongue-twisting aria from Rossini’s The Barber of Seville, with enjoyably calamitous results. It is the highlight of a new arts programme that is understandably still trying to find its own voice.

Taking over the nocturnal slot occupied by Arts Tonight, Inside Culture uses its magazine format to explore diverse stories in depth. The reports on the new production of Rossini’s opera and the closure of the Dublin arts hub Block T are commendably comprehensive, if somewhat arid and narrowly focused.

An experienced broadcaster, Davenport is inquisitive and well informed, but some of his normal wryness is lost in conducting such reports. However, his interview with the American author David Rieff about memory in the modern world is much more stimulating.

It’s a creditable first episode, with the vibrant sounds and cultural vitality of Davenport’s Italian vox pop pointing in a more fruitful direction.

Moment of the week: Collins calls in