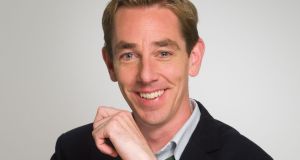 Geniality, erudition, arcane knowledge and humour: when Ryan Tubridy is at his best

On Tuesday the air is thick with the sound of Ryan Tubridy droning away. Nothing unusual there, the cynics might say, but this is different. Opening The Ryan Tubridy Show (RTÉ Radio 1, weekdays), the presenter is actually emitting a low-register hum. “It’s a foghorn imitation,” he clarifies. “A bad one,” he adds, unnecessarily clarifying further.

Tubridy is doing his impersonation after hearing the distinctive sound during last week’s “Scooby-Doo fog”, and is perplexed. “I thought foghorns had been banned. Is this the continuity foghorn?” He spins this random observation into several minutes of airtime, with listeners phoning in answers. (Apparently, lighthouses no longer use foghorns, but ships can still deploy them in pea-soupers.)

Flighty items such as this litter Tubridy’s programme, constituting a kind of Marmite test for listeners. For those who deem Tubridy a bland lightweight, impressions of maritime equipment are unlikely to change their opinion. But such ostensibly trivial moments equally show off the distinctive combination of geniality, erudition, arcane knowledge and humour that marks Tubridy at his best. When he’s in the mood he can enjoyably riff on the flimsiest of topics, turning potentially prosaic experiences into surprisingly engaging radio.

This week has seen the presenter in good form, which is just as well, because the bill of fare is pretty insubstantial. By way of example, Tubridy hears from Shauna, a woman who met up with a man via the Tinder dating app, with less than romantic consequences, and Brendan, a man who met a brother of the late Colombian drug lord Pablo Escobar.

Neither chat is earth-shattering, to put it mildly. Still, by teasing out some personal details Tubridy somehow keeps the interviews alive. (He also displays old-fashioned mores, as when he baldly states that Tinder is about getting sex. Shauna upbraids him, preferring the term “hook-ups”.)

And, when a story has obvious substance, he stands back. The journalist Vicky Kavanagh talks about the mental-health problems that caused her mother to make multiple suicide attempts, starting when Vicky was still at school. Neither host nor guest overdramatises the interview, which makes some of the details more shocking. Asked to put a figure on the number of times her mother has tried to end her life, Kavanagh says she has lost count.

A change in diagnosis finally improved this nightmarish situation: Kavanagh’s mother was deemed to be suffering from depression when in fact she is bipolar.

As happy endings go it’s an unusual one. But the tale simply illustrates the way that mental-health problems can overwhelm entire families, and how lack of awareness can make matters worse. Kavanagh is praised for her courage but is keen to make a broader point. “We’ve all gone through tough times. Why be brave, when we can talk about it?”

For all his chipper chatter, Tubridy can still host resonant conversations.

Once Tubridy’s midmorning nemesis on Today FM, Ray D’Arcy still sounds ill at ease in his role as a station colleague. Although The Ray D’Arcy Show (weekdays) regularly boasts the big-name guests that Tubridy conspicuously lacks – Padraig Harrington turns up on Wednesday, almost as an afterthought – the presenter seems to miss the zippy public interaction of his old berth. Such diversions were often light in tone, but they provided an atmosphere of spontaneity that is missing from D’Arcy’s current slot.

If D’Arcy increasingly trades on his world-weary side, he can still occasionally get animated. On Wednesday he talks to the American author Steve Silberman, whose book Neurotribes deals with autism, a subject that interests the host. D’Arcy starts out recalling that when he collected for autism charities as a child in the 1970s – he had a cousin with the condition – nobody knew what it was.

As it turns out, ignorance and confusion have always accompanied autism. Silberman tells how it was initially identified in narrow terms as a childhood condition and treated in often wildly inappropriate ways, with parents even disowning offspring. “The history of autism is a history of quackery, really,” he says. It continues to this day, with much hostility to the MMR vaccine resting on the misguided claims that it causes autism.

At moments like this D’Arcy’s impatience with irrational cant shines through. When listeners text in with dark implications about the clout of pharmaceutical companies, the host is dismissive, allowing his guest to explain why there are now so many more cases of autism than before. (Easier clinical tests and a broadening of the diagnosis are the key factors.)

D’Arcy clearly wants to hear more from his guest, which isn’t always the impression he conveys these days. At one stage Silberman says that he can now identify with the way people with autism see the world, and why they might want to shut themselves off from it: “It’s loud, and people are always talking.”

There are times when it appears that D’Arcy thinks the same way about his current slot.

Moment of the week: A Blade’s sharp sounds

It may be wrong to judge people by their record collections, as suggested by Nick Hornby’s novel High Fidelity. But that’s the implicit premise of Songs in the Key of Life (TX FM, Saturday), in which Nadine O’Regan quizzes her guests about music they love. So Paul Cleary is a wonderful character. The frontman with the recently re-formed 1980s Irish band The Blades chooses a peerless selection of reggae and soul, Beatles classics and indie gems while chatting about his life and career with modest candour. For listeners of a certain vintage it’s a case of being happy to hear, if not meet, your heroes.

Women, as written by Roald Dahl
9