Queer Eye: a sanctuary of happiness in the frightening world of modern telly

They might seem fixated on quick fixes, but the Fab Five see the value in people’s lives 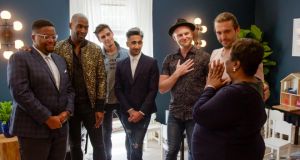 It’s hard to imagine a world without the gorgina grooming guru Jonathan Van Ness, yet it’s a mere four months since he first pirouetted into the spotlight (and our hearts) as part of the new Fab Five in the Netflix reboot Queer Eye.

Since then a thousand gifs of his hair-whipping skills have been born, Karamo Brown’s all-round perfection has been confirmed by a panel of experts, and the cookery “whizz” Antoni Porowski has become an avocado-mashing heart-throb (or a symbol of thirst over talent, depending on whose Twitter feed you read).

Queer Eye has been a huge success for the streaming service, so it’s no surprise that the second series has just landed. The show has taught us that it takes five men to replace one Oprah Winfrey, and that audiences have been starved of kindness. Viewers seem to be growing ever more unnerved by the prestige paranoia of The Americans, The Leftovers and House of Cards, and, with not even escapist reality shows offering any kind of refuge, as the glass-slinging bitchiness of The Real Housewives and RuPaul’s Drag Race turn the air toxic, anxiety has infected every genre. Queer Eye is a sanctuary of genteel happiness that adds a much-needed feelgood factor to the frightening world of modern telly.

The team’s mission is to be the unifying rainbow in Trump’s monochrome United States. ‘Look at this truck full of American homosexuals!’ they shout at passers-by

Little has changed for season two. Antoni is still wearing Strokes T-shirts but has moved on to grilling peaches (very Call Me By Your Name), and Tan France is still spreading the keep-it-tight-for-your-wife manifesto. Poor Bobby Berk still carries the bulk of the workload, huffing around bits of furniture and stressing with tape measures while Karamo ponders masculinity and Jonathan screams at himself in the mirror. The only difference is that they have broadened their remit to include their first woman subject and a transgender man, because shouldn’t life-changing fabulosity be available to everyone?

If anything, this season doubles down on their mission to be the unifying rainbow in Trump’s monochrome United States. “Look at this truck full of American homosexuals!” they shout at passers-by from their luxury jeep, draped in stars and stripes. If the first season was the guac appetiser, this is the full-fat mac’n’cheese main course.

The Fab Five demand to be seen as exactly who they are, comfortable in their skins, and it’s the confidence and positivity they radiate when they burst into peoples lives that are so attractive, not the fancy outfits, the transformed kitchen or the hair products. They let their clients be their best selves, which may sound trite, but what they unearth beneath the detritus and depression of people’s daily lives is a common thread of vulnerability and humanity.

The show promotes quick fixes, but the real work is done when the boys remind their nominees that they are loved and that a community is behind them, and get them more involved in these important relationships. Whether it is introducing Myles, a lonely young gay man, to his local gay choir, forming a dad’s group for Leo, a barman, or letting Tammye, a church leader, find the diva within while reassuring her that she can rely on others, they show these people the value of what they already have in their lives.

And this time around it’s not just the hapless candidates who are learning about themselves: the boys also go through personal transformations, guided by their subjects. Bobby’s unhappiness and unease around organised religion, which stems from his regimented, unforgiving childhood, is clear in the first episode. Refusing to step inside Tammye’s church, he visibly recoils at the notion of religion, but her warmth and tenderness make him soften his views of the beliefs that bring her comfort.

Tan also faces a personal challenge when, as the gang head off to help Skyler, a trans man who has just completed his top surgery, he admits he has never met a trans person before. The confident Englishman is reduced to tears thinking about his lack of understanding of the struggles of trans people and regretting his lack of involvement in the LGBTQ community. It’s a sobering, sincere moment that shows there are aspects to improve on in everyone’s lives.

Queer Eye’s self-help soothing may not save us all, but it’s a welcome safe space. As Jonathan twirls out of the door, crying “Pomade! Pomade! Pomade!”, series three can’t come quickly enough.