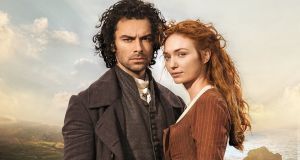 ‘Why didn’t I marry an ordinary man?’ asks Demelza, who has been Poldark’s charge, his servant, and, not always faithfully, his wife

Captain Ross Poldark briefly enumerates his latest set of challenges during the first episode of the final season of sunny historical soap opera Poldark (BBC One, Sunday, 9pm) “He wants me to take on the government, the crown, the empire, the slave trade…?” he says in in mock disbelief of a man who enjoys steep odds. “Did I miss anything?”

That seems very unlikely for Aidan Turner’s swarthy hero, forever brooding and bold, who, it is roundly agreed here, never misses a trick. “So, needless to say, you have a plan?” one character grins in otherwise hopeless circumstances, as though well acquainted with Poldark’s shtick.

High on looks and light on complexity, Poldark has steadily promoted its protagonist in position and temperament over four series. When the show began, in 2015, he was a British soldier who had returned from the US War of Independence, to face destitution and despair, beset with labours that Hercules would find daunting. These included reviving his ruined family estate, maintaining more than one tumultuous romance at a time, and keeping his shirt on for a whole episode – challenges met with varying levels of success.

Now calmer, wiser and, so far, disappointingly shirtier, Ross Poldark is a reconciled husband and honourable MP, with a valiant heart for a lost cause. “Why didn’t I marry an ordinary man?” joshes Demelza, who has been his charge, his servant, and finally, if not always faithfully, his wife.

Poldark doesn’t do ordinary, though, which is why Ross’s presently idyllic circumstances in Cornwall last no longer than a few minutes, before Ned, an imprisoned Irish man and old war buddy from Ross’s stint as a red coat, sends word about a gross miscarriage of justice against him, via his wife, an emancipated slave.

(Demelza, learning that Kitty was formerly Ned’s scullery maid, bonds over her shared experience. It turns out you can get the help these days.)

And so to London, where Ned’s cause pits Ross directly against a mahogany tycoon who is in cahoots with George Warleggan, Ross’s rival and nemesis. (Under the no-plot-point-wasted efficiency of showrunner Debbie Horsfield, Poldark’s surviving characters recommence hostilities with the precision of partners in a set dance.)

New characters are otherwise speedily marked out as either villainous or virtuous depending on their politics. “On the Irish question, where do you stand?” the dastardly Mr Mahoganny asks Warleggan. Right on its throat, is George’s answer, who is not taking the death of his wife well.

The wood magnate’s daughter, Cecilly, however, is as woke as they came at the turn of the 19th century. At a meeting for slavery abolitionists, she encounters the feckless but sufficiently right-on Geoffrey Poldark, and the going gets gooey.

Spun later into the theatre, the ever-wary, preternaturally perceptive Ross thwarts an assassination attempt against the king, and, in a dizzying bit of plot chicanery, is abruptly recruited as a secret agent.

As Ned is speedily released from prison, and Poldark slides suavely into employ of His Majesty’s Secret Service, you may pause briefly to consider that Turner’s name has been floated as a possible replacement for Daniel Craig when he finally hangs up his Double Os.

Look at it in that light and you could swear you were watching a sly audition piece. “A sure remedy for a sore heart is a mission,” Poldark says at one point, from behind a stiff drink and a card table. “Always.”