Patrick Freyne: The unthinkable as it happened on TV 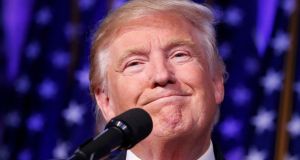 US president-elect Donald Trump speaks at his election night rally in Manhattan. Patrick Freyne takes us through the unthinkable as it happened. Photograph: Reuters

Who is the 45th president of America? Who is this era’s Zachary Taylor or Millard Fillmore or, to bring it up to date, Immortan Joe? Who has won America?

Upsettingly, it is Donald Trump. He has defeated all predictions and has become president of the United States. The campaign has been horrible. “I feel like I’ve just woken from a long fever dream,” said Alisyn Camerota on CNN before any vote had been counted.

“It’s like we’ve been sucking on an aching tooth for 18 months and it’s finally time to yank it,” said veteran broadcaster Ted Koppel.
It’s surely no coincidence that five states were also voting on legalising marijuana – it feels necessary.

Neither candidate is popular. Trump is a melted He-Man action figure turned receptacle for incoherent hate (for immigrants, women, taste and facts). And Clinton is, for many, a dark mirror in which they see their own mother issues and tinfoil hats. Her campaign messaging has degenerated from liberally skewed conservative realism, into, “I’m not Trump”. This was not enough.

RTÉ’s coverage started with Brian O’Donovan on News at Six before a fluttering US flag, waving his arms and explaining the system. “270 is the magic number,” he said, of the number of electoral college votes a candidate must win to become president (of course, if you’re a Trumpian conspiracy theorist who believes Clinton to be a spirit-cooking Satanist, the magic number is actually 666).

The magic wall
While O’Donovan had a backdrop featuring the White House and the flag, CNN had a “magic wall” – not more Clintonian witchcraft, but a big iPad filled with interactive graphics and statistics. Meanwhile, the BBC, possibly influenced by the film Tron, had built a virtual CGI version of Washington around which Jeremy Vine nimbly leapt and twirled as graphics flew around the screen causing my irises to burn.

Over on UTV Ireland’s News at Ten a reporter visited Doonbeg where Mike Pence has family connections and Trump has a golf course. “It would be great if we had the president and vice president with connections to Doonbeg,” mused a local. “There’s Mr Trump there on the camera now, look at him,” said local publican Tommy Tubridy adoringly as he watched Fox News. People will no doubt be very thirsty when we’re all in hell.

Vincent Browne kicked off TV3’s coverage by telling us he has filmed New York street performer the Naked Cowboy “on my iPhone”. This footage is considered relevant, I think, because the clothes-averse ruminant-wrangler has the word “Trump” written on his arse. It was as illuminating a contribution as any I saw on election night. Then Browne interviewed some New York Times journalists and chaired a Trump-phobic discussion. New York writer Peter Applebome provided the snappiest soundbite: “What’s going on is a national nervous breakdown.”

On UTV Ireland,  a Trump supporter in Ohio told a reporter: “When I drive in my [Trump-festooned] truck I get twenty thumbs up and one index finger.” “That’s not the most scientific poll,” said the reporter, though as polls go, it was as good as any.

Back in the studio, talking heads spoke from a desk swirling with hypnotic abstract shapes, maybe as a stop-gap before the legalised marijuana comes online (everyone was also wearing poppies, presumably indicating that they were all on opium to calm their nerves).

Over on BBC1, Emily Maitlis started outlining initially unsurprising results of the exit polls at her own “magic wall” while jovial Andrew Neil and incisive Katty Kay managed the punditry desk (Jeremy Vine still dwelt in his magical CGI kingdom). Their approach is educational. “In most of the world ‘red’ means the left and ‘blue’ normally means conservative,” said Neil. In America it’s different, he observed.

“We can thank Tim Russert for that,” said election analyst Norman Ornstein, recalling how the late TV journalist first used those colours to represent the major parties. “The power of the media,” said Neil and laughed (sadly?).

The road he travelled
Over on UTV, Tom Bradby presented “a quick reminder of the road [Trump] has travelled,” and we watched, again, footage of Trump advocating torture, attacking war heroes, inciting violence, promising religious persecution and boasting about sexual assault. I observed Trump in action once more: his hair made from attic insulation, his brain a hive of bees, his heart a burned-out piece of charcoal, his tiny terrier paws gripping the podium, his puckered little mouth spewing syntactically bizarre word-clouds of hate.

“Are you really happy with [him] having his hands on the nuclear codes?” a panelist asked his former campaign strategist Corey Stewart, before referring to Trump’s propensity for late-night tweeting. “Tweeting is one thing, starting a nuclear war is another,” said Stewart. “I should bloody well hope so,” responded Bradby.

The race was a lot tighter than anticipated. Over on RTÉ1, a reliably comforting Bryan Dobson marshalled a panel of tame US journalists and academics who discussed the anti-establishment leanings of Trump voters. “If you want to burn down the house, hire the arsonist and Donald Trump is the self-identified arsonist here,” said Frank Sesno in Washington. “This is an anger election. This is an alienation election.”

On BBC1, at around 2am, Emily Maitlis drilled back into the figures. Jeremy Vine stood among his palace of CGI pillars and talked about inconclusive projections. “It still remains completely uncertain,” said Andrew Neil.

Over on CNN, John King used the “magic wall” (the big iPad) to show presenter Wolf Blitzer the many routes to the presidency open for Trump. He zoomed into different voting districts and uttered percentages all the while staring possessively at the “wall” as though nervous Blitzer might touch it (Blitzer has a look on his face that suggests he really wants to touch it).

I couldn’t follow King, so I went back to RTÉ1, where they were trying to parse why Trump was doing so well. “It’s an absolutely fascinating contest,” said Bryan Dobson at one point, though when he said “fascinating” a lot of people heard “terrifying”.

It became increasingly clear Trump would win. “No matter what happens, there was some element of a silent Trump vote,” said political commentator Larry Donnelly. “We underestimated how strong it was.”

“With the apparent bigotry and misogyny . . . with no detailed policies,” said journalist Gina London. “We kept thinking it was never going to happen. . . something is happening in that country.” RTÉ then went off air.

On the BBC, Emily Maitlis tried to figure out the increasingly narrow ways in which Clinton might succeed . A reporter talked to nervous immigrants in New York who “joked” about leaving the country. There was an edge to the joke. Later, chants of “lock her up” broke out at Trump’s New York headquarters.

Andrew Neil reminded us of Trump’s “hostile takeover” of the Republican party and that he is now close to “dissing the political establishment and the media establishment”.

“This would be the upset of American political history,” added Katty Kay. “It might be time to throw professional political polling out the window,” said Emily Maitlis a little later, “and go back to Paul the Octopus.”

As Trump’s victory became more likely, pundits started desperately trying to figure out what a Trump presidency might look like (his policies are light on detail and often contradictory), its effect on the divided Republican Party (which also won the Senate and House) and international relations. “Has any democracy since the second World War taken such a risk as America has taken tonight?” asked Andrew Neil. They will be parsing this for days, weeks and years.

The long and short of it is that a huge number of Americans feel alienated by the establishment and/or America’s changing demographics. Trump stoked their fears and used the licence granted to him by those fears to trade in hate, lies and unachievable promises.

A misogynistic, racist liar is now president of the United States. Hillary Clinton has conceded. The Democrats need to spend the next four years figuring out what happened and coming up with a credible left-wing response.