Patrick Freyne’s Guide to the Rose of Tralee

2016 Revisited: The Roses' job is to float around smiling and wearing a sash, which resembles a bandolier

A few of the Roses share their stories ahead of the Rose of Tralee International Festival taking place in Co Kerry August 17th to 23rd. 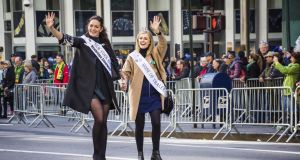 Every year settlements across the Irish Diaspora must select a young woman to be sent into the Kerry hills for The Rose of Tralee Festival, the greatest example of Hibernian soft power that I can think of.

This festival harks back to 1957 when a bunch of Tralee businessmen met in Harty’s bar and came up with a globally ambitious beauty pageant. It’s clearly a trick by Kerry people to lure non-Kerry people over the border, and every year I stand there shouting “It’s a trap!” but to no avail.

If you’ve ever been in Tralee at this time you will notice that there are two festivals. There’s the festival in the town itself which is like the outlands in Zardoz but with more funfairs and ice-cream cones, and then there is the Dome on the edge of town (which isn’t really Dome but a big rectangular tent), which is like the Vortex in Zardoz, where Roses, escorts and chaperones wander around in a state of bliss.

It is difficult, in the Dome, to recall life in the outlands and everyone in the Dome agrees that being there is “wonderful” and “special” and “the experience of a lifetime”, even Irish Times journalists who vaguely recall that they have an assignment to do.

The Roses are a fascinating bunch. The original was a tubercular maid in 19th century who died after falling in love with a Protestant, which was probably considered good enough for her until someone wrote a song about it. Since then, academic inflation means that the average Rose isn’t a tubercular maid at all, but a brain surgeon or a senior manager at the HSE or a scientist at Cern. Some of them are even Protestants themselves.

The Roses job is to float around smiling and wearing a sash, which resembles a bandolier, and a fascinator, which is a sort of dainty satellite dish from which she receives transmissions from Rose of Tralee High Command.

The Roses are always very “on message”, and amid them there are cadre of Rose of Tralee commissars who ensure that everything is kept uncontroversial and ideologically pure. If a Rose so much as mentions her time smuggling diesel for the ‘Ra, the campaign to repeal the Eighth Amendment or what peyote feels like, she will be brought down by a tranquiliser dart and carried upstairs for re-education. The Roses know what side their bread is buttered on, however, so this happens rarely. I’ve only seen it once or twice.

Other people you will meet:

Former Roses: These are very drunk but still somehow incredibly graceful. They now work in high finance or for Nasa.

Rosebuds: Miniature child labourers gifted to each Rose – presumably so named to evoke the sense of regret and futility that concludes Orson Welles’s film Citizen Kane.

Escorts: These sentient handbags symbolise, for people watching at home, their useless cabbage-headed sons. “If only my useless cabbage-headed sons would marry a brain surgeon or a Protestant like that one there,” think a nation of mothers who have their hearts broken with them. I have made this observation before, but the Rose of Tralee is not catering to the male gaze but to potential parents-in-law, desperate to offload their oafish male progeny on an unsuspecting, overqualified martyr.

Former escorts: Any of these you meet will also be very drunk and now married to former Roses. Those who have not married former Roses are long dead.

On Saturday in the run-up to the televised festival, the Roses are paraded through the town on a series of floats. They wave in a special way which saves energy and involves a minute movement of the wrist. None of the Roses wave their whole arm in a frantic fashion while screaming “F*** yeah bitches!” and if they do this they are marked down for re-education by the chaperones, ever ready with their blow-pipes.

On Sunday they also go to Mass where they pretend they are regular attendees and where everyone pays close attention to the Protestants and how they react to transubstantiation.

On Monday it’s time for the show. It’s been a year in the making. Early in August a team from the Dome head up into the mountains with a big net and a family pack of Curly Wurlys to catch Daithí Ó Sé, who they shave, wash and force into a tuxedo.

Daithí Ó Sé is a Rose Whisperer and he is the best Rose Whisperer they have ever had. Former Rose Whisperers were English people from Dublin such as Gay Byrne and Ryan Tubridy, who watch the BBC and just don’t get it.

In contrast, Daithí is as Irish as Cúchulainn (and not just because can totally picture him beating a dog to death with a hurley) and when you see him silhouetted on the Dome stage in the middle of an act of entertaining eejitry, it is akin to watching a wild stallion rear up on a cliff-side.

“Magnificent,” says everyone, and then they all have to stop the father of the Texan Rose from shooting him and mounting him above his mantelpiece.

The Rose Whisperer’s job is to coax the Irish Roses to talk and the Irish American Roses to be quiet. The Roses generally discuss the minutiae of their profession, their heritage and their apparently chaste love lives. It’s like a really boring job interview and this is how it was originally pitched to RTÉ. None of the Roses has ever brought up “sexting” or “swinging” even though it’s the 21st century, for God’s sake.

Some of the Roses have “a talent” which they display on request. Some ask Daithí to assist them change their costume so that they can do a frenzied jig. If this happen Daithí will raise his eyebrow or wink because, you know, sex exists. Others sing about emigration or their home counties in songs with titles such as My Lovely Laois but never Laois is a Hole. Some Roses recite a poem, usually from a piece of paper, which means that their talent is, essentially “reading”. One year a Rose tucked Daithí into a little bed and read him a story. We don’t really like to talk about it.

Watching carefully in the front row are the judges, this society’s priestly caste, who have a tricky job to perform. While today’s Roses must recognise contemporary liberal values, it’s difficult for the judges to tell the difference between “modernity” and “notions”. What were “notions” yesterday are petals on the flower of contemporary womanhood today – wearing shoes, having a high-powered job, cheeking Daithí. Who knows what will be signs of modernity tomorrow? Having equal representation in government and full control of their own bodies, maybe?

The most important member of the judging panel is the ophthalmologist, because whenever you ask a judge what makes a true Rose they quote the final line of the song:

“Yet ‘twas not her beauty alone that won me; Oh no, ‘twas the truth in her eyes ever dawning, That made me love Mary, the Rose of Tralee.”

The ophthalmologist must determine whether what the judges discern in a winner’s eye is really “the truth in her eyes ever dawning” or a nasty infection.

And then a winner is chosen. She weeps and is congratulated through gritted teeth by her sister-wives (unless one of them invokes ‘trial by combat’, but this hasn’t happened since the 70s). Then she receives a bunch of prizes including a tiara, a trophy, an adventure break in Kerry, a permit to carry a concealed weapon, the right to intervene during a constitutional crisis and diplomatic immunity from prosecution. The Dome is burned, Daithí is returned to the mountains, and that’s it for another year.

Fleet Foxes: ‘I’m trying to find silver linings in this madness, a healing space in music’
6