Prince Harry and his wife Meghan Markle have hit out at the British monarchy and members of the royal family during their candid Oprah Winfrey interview. Video : ITV, courtesy Harpo Productions / CBS 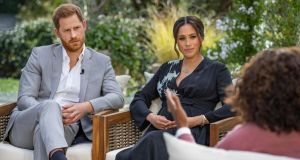 No holding back: Prince Harry and Meghan Markle with Oprah Winfrey. Photograph: Joe Pugliese/Harpo via AP

Oooof! Meghan Markle cannot be accused of holding back as she sits down with Oprah Winfrey for her tell-all Megxit interview. One by one the bombshells drop. “Concerns” are expressed from high in the British royal household about baby Archie’s potential skin colour. A quick lesson in curtsying is delivered to a gobsmacked Meghan by Harry and, randomly, Sarah Ferguson, en route to tea with Queen Elizabeth. (Meghan had naively assumed that Harry did not bow to his grandmother.) Kate Middleton reduces Meghan to tears hours before her wedding to Harry in a row about flower-girl dresses.

Meghan’s complaints about the Firm, as the family is sometimes referred to, run from the devastating to the banal – tears before a wedding are hardly uncommon, conversations about the skin tone of an unborn baby less so. But each contributes to a damning portrait of one of Britain’s most sacred institutions.

In Ireland we are, of course, reflexively baffled by the deference shown to the royals in the UK. Meghan clearly shares our bemusement. Before she married Harry, her knowledge of the queen and her extended family was fuzzy at best, she explains over the course of a gripping and hard-hitting sit-down interview with Oprah.

‘Whaaaat?’ says Oprah, mouth agape, as Meghan reveals discussions about the then-unborn Archie. ‘Hold on. There are several conversations with you about… how dark your baby is going to be?’

She certainly had little inkling she would become a virtual prisoner in a gilded cage. Or that the British monarchy’s views on race seem to belong to the 19th century rather than the 21st.

“Whaaaat?” says Oprah, mouth agape, as Meghan reveals that there were discussions about the then-unborn Archie and the possibility that his skin might be “dark”. “Hold on. There are several conversations with you about… how dark your baby is going to be?”

Race, Meghan elaborates, is constantly on her mind during her time with the Firm. Not because she thinks about it but because they do. “I thought about it because they made me think about it.”

The speculation going into the 90-minute Oprah with Meghan & Harry: A CBS Primetime Special – airing on RTÉ2 tonight – was that it could be potentially as damaging as Princess Diana’s interview with Martin Bashir on the BBC’s Panorama programme, in 1995, in which she delivered the devastating “three of us in this marriage” line.

But in fact it could be even more harmful to the British monarchy. Diana had focused on her dysfunctional marriage and Charles’s refusal to break off his relationship with Camilla, whom he eventually married in 2005. Meghan’s sit-down with Oprah, by contrast, paints the British monarchy as hidebound and cripplingly out of step with modern values.

‘I just didn’t want to be alive any more,’ says Meghan as the tears flow. ‘That was a clear, real, frightening and constant thought’

“I just didn’t want to be alive any more,” says Meghan as the tears flow. (Oprah sheds a few too.) “That was a clear, real, frightening and constant thought.”

Oprah begins by explaining that no questions are off the table – and that the Sussexes are not being paid for the interview. And she does pose some testing teasers – bringing up, for example, rumours that Meghan made Kate Middleton cry. The opposite was the case, says Meghan.

“A few days before the wedding she was upset about something, pertaining to – yes, the issue was correct – about the flower-girl dresses, and it made me cry. And it really hurt my feelings.” Kate, she adds, later bought her flowers by way of apology.

Harry joins Meghan for the second half of the interview. A practiced banterer, he initially cuts a jaunty figure. But then come further revelations. Meghan, he says, had been advised not to seek outside help during her most testing days as a royal. Everyone else in the family had been through difficult times – why should she be any different?

“What was different for me was the race element,” he tells Oprah. “I said, ‘Guys, this is not going to end well.’”

‘I needed to do this for my family,’ says Harry. ‘It’s really sad that it’s got to this point, but I’ve got to do something for my own mental health, my wife’s and for Archie’s as well’

He, like Meghan, speaks warmly of the queen. But he says that his father, Prince Charles, had stopped taking his calls. “By that point I took matters into my own hands. It was, like, I needed to do this for my family. This is not a surprise to anybody. It’s really sad that it’s got to this point, but I’ve got to do something for my own mental health, my wife’s and for Archie’s as well.”

All of this is against the backdrop of a sun-dappled house in southern California, which has been made available by a mutual friend . There is also footage of Harry and Meghan in their own home, where they keep chickens and seem at peace. Yet this serene image is at odds with the devastating message Meghan is here to convey: that the British monarchy has two feet in the past and has been unable to reconcile itself to her mixed-race background or her desire to live a relatively normal life.

“As an American, what you know about the royals is what you read in fairy tales,” says Meghan. “It’s easy to have an image that is so far from reality.”