Autobiography once compulsory reading for the Leaving Cert ... and dreaded by teenagers 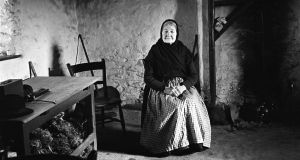 Peig Sayers’s autobiography was published in 1936 and soon became a staple of the curriculum.

Peig is one of the few characters in Irish life known only by her first name. Unfortunately for her she came to be synonymous with a certain view of the Irish language.

Peig Sayers’s autobiography has not been on the compulsory Leaving Certificate Irish curriculum since 1995, yet it casts a long shadow over the language.

It famously begins as Gaeilge with the opening lines: “I’m an old woman now with one foot in the grave and the other on its edge. Had I known in advance half, or even one-third of what the future had in store for me, my heart wouldn’t have been as gay or as courageous as it was in the beginning of my days.”

It doesn’t get much better than that as Peig recounts a litany of woe that befell her during her long life: the deaths, deprivation and emigration while living with her husband on the Great Blasket Island.

It has often been forgotten that Sayers did not write the book with which she became associated. It was dictated to her son, Maidhc, who edited it to reflect a view of his mother as a stoic, long-suffering Irish Everywoman in keeping with Éamon de Valera’s vision during the 1930s.

It was published in 1936 and soon became a staple of the curriculum.

Unfortunately, the book came to associate the Irish language with poverty, misery and bored generations of teenagers to tears.TG4 broadcaster Sinéad Ní Uallacháin is attempting to rehabilitate Sayers’s reputation and restore her as a storyteller worldwide .

“I wonder what Peig would have said, if she knew that we’d still be talking about her, at length, in the year 2021?” mused Ní Uallacháin?

“ This woman generously shared not only her life story, but many other stories that she had collected over the years; I don’t believe the abuse she continuously receives is warranted. There are many layers to Peig, as I found out whilst making this programme.”

She discovered that Sayers was a much maligned woman who, in many ways, was the opposite of that portrayed in her autobiography.

Máire Ní Dhálaigh, of the Office of Public Works’s Blasket Centre, said: “Peig was the Netflix of the time and people gathered around her from far and wide. She was a woman . . . who loved to entertain and drew people to her.”

Dr Criostoir MacCarthaigh told the documentary that contrary to the public image, Sayers was a woman with a strong sense of humour who was recorded in the 1940s by the Irish Folklore Commission and was a born performer.

She also has a fan in Sharon Granahan who has a Peig Sayers tattoo on her right arm. “I wanted to show my love and respect for Gaeilge,” she said.

The documentary will also question how our relationship with Sayers reflects a complex relationship with our heritage, language and who we are. The television show was produced by Waddell Media for TG4 with funding support from Northern Ireland Screen’s Irish Language Broadcast Fund.