Netflix: 10 of the best new shows and films to watch in September 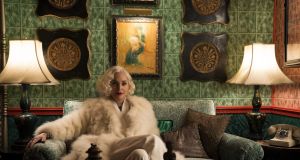 Chef’s Table is a lush look at food cultures, with previous seasons delving into Southern cuisine and the finesse of French cooking. This new series of this ever popular Emmy nominated food show focuses on the pitmasters of barbecuing. Each episode features a different restaurant from around the world, from Texas to Mexico and examines the various styles of barbecuing such as whole-hog cooking, as well as the Mayan tradition of cooking cochinita pibil – the slow-roasted pork dish from the Yucatán Peninsula. The art of BBQ is thoroughly pulled apart and relished throughout the series.

Netflix is adding to its ever growing roster of art house directors with the latest film from Charlie Kaufman. Starring arresting Irish actress Jessie Buckley (Wild Rose) and Jesse Plemons (Breaking Bad), on the surface it’s an unwieldy road trip that leads the reticent Lucy (or is it Louisa?) to her boyfriend Jake’s rural family home where his parents are waiting. At a surreal family dinner, time bends and warps, with Jake’s parents (played by Toni Collette and David Thewlis) appearing as older or younger as the same conversations play out forever to be repeated like an echoing nervous laugh.

Kaufman isn’t interested in the linear or the easily digestible bones of a plot. Throughout the film there are daydream tangents,scraps of cultural bricolage, strange unexplained digressions – it’s an attempt to capture how we are all to some degree trying to free ourselves from the mundanity of existence. The constant repetition that leads to nothing, the inertia of a failing relationship, the desire to be needed but the understanding that we are truly alone.

It’s a film of constant cognitive dissonance, culminating in an absurdist crescendo that must be seen to be believed.

The sociological and emotional conundrum of women in space was beautifully explored this year in Alice Winocour’s stirring film Proxima and is the focus of this new Netflix drama starring Hilary Swank. Swank plays Emma Green, an astronaut who must leave behind her engineer husband and teenage daughter as she embarks on a mission to Mars, heading up an international crew.

With each of the squad trying to escape some kind of turmoil, from grief to marital strife, it’s a show that does not bask in the awe of the unknown and the vastness of the universe but rather tries to unspool the claustrophobia of modern life. It’s about what the astronauts have escaped from or what has propelled them into a career that depends on them being disconnected from their loved ones for years at a time. Away is less science fiction and more sentimental fantasy.

Comedian Katherine Ryan writes and stars in this sitcom about an impossibly fashionable, chaotic single mother whose daughter Olive is the centre of her universe but who also longs for another child. With Olive’s father being a feckless Irish ex-boybander and her love life stalling, Katherine must make the decision about whether to apply for a sperm donor or to try her luck in the unreliable world of modern dating. Comparisons to Sharon Horgan’s acerbic Catastrophe will be made, with its look at the school-run rivalry and the pressures and anxieties of being a mother but as Katherine is a single mother, there is a sharpness to its humour about navigating this tricky terrain alone and the judgment that surrounds these circumstances.

The Devil All The Time

Sept 16th
Based on Donald Ray Pollocks’s novel, this sprawling Southern Gothic tale spans two generations between the second World War and the Vietnam War. It tells the story of Arvin (Tom Holland), a good God-fearing Christian boy. He slowly begins to move away from the light and into the darkness that seems to envelop the small town which is teeming with corrupt citizens and an air of barely concealed brutality and violence. Arvin must protect his family as he is forced to face the evil that resides within those who congregate around him.

With an all-star cast that includes Riley Keough, Jason Clarke and a gleefully overblown Robert Pattinson as a charismatic dust-bowl preacher who delivers his sermons in a frilly shirt and powder blue suit, it has all the makings of a powerful prestige production.

The magnetic Tituss Burgess presents this karaoke competition that pits its contestants against the original vocal performances. Judged by a vocal analyser, the more the participants sing in tune, the more money they can win, before the battles are whittled down to a two-person sing off. As the Covid-19 pandemic has silenced karaoke parties, Sing On! may be the only chance to vicariously bellow along with others from the safety of our own couch.

And so we continue our journey on Ryan Murphy’s endless conveyor belt of pop culture favourites and oddities. The heavyweight screenwriter-producer has carved out his very own niche where he has explored the rivalry of Hollywood greats (Feud), conjured up an alternate origin story of Tinseltown itself (Hollywood) and has tackled America’s relationship with race, violence and homosexuality through his work on American Crime Story and Pose.

Ratched sees Murphy moving into new territory,taking on an iconic, formidable fictional character, One Flew Over the Cuckoo’s Nest’s nurse Mildred Ratched. The drama follows the creation of the monster as Sarah Paulson’s young nurse Ratched infiltrates a psychiatric hospital, presenting herself as an exemplary professional – while the sinister and cruel elements of her personality boil away within, they are yet to reach the surface.

With shades of American Horror Story: Asylum, Murphy is treading familiar territory but is also taking a risk by formulating a back story for a character that embodied the inhumane aspects of the American psychiatric industry. Does Nurse Ratched warrant an interior life? Even if it is a story that somehow includes an impossibly glamorous Sharon Stone carrying a spider monkey on her shoulder? With Murphy’s sprinkling of high camp and arch humour, Ratched might not contain the biting realism that Cuckoo’s Nest fans admire and which made Nurse Ratched such a terrifyingly believable villain.

A Love Song For Latasha

September 21st
A timely and powerful documentary, A Love Song for Latasha recounts the short life of Latasha Harlins, the 15-year-old girl whose death was a catalyst for the 1992 LA riots. Sophia Nahli Allison’s film is an experimental, dreamlike piece which uses existing footage and weaves in memories from her close family members, including her cousin and her best friend.

The film presents Harlins as a three-dimensional human, a young girl filled with optimism and hope, someone whose life was stolen from her and whose story is more than the 26 seconds of grainy footage that is associated with her. A Love Song For Latasha frees her from this historical existence as a statistic or a moral touchstone and asks us to remember the nuanced humans behind the headlines and shocking videos.

This bombastic romp about Sherlock Holmes younger sister has already fallen foul of Arthur Conan Doyle’s estate due to it flagrantly showing Henry Cavill’s Sherlock having actionable human feelings. Whether his Holmes will have to have his emotions snipped before the final cut remains to be seen but this film casts him as a minor character to his teen sibling Enola, played by Stranger Things’ Millie Bobby Brown.

Enola is on a quest to find her beloved mother (Helena Bonham Carter) who has gone missing. She must avoid her meddling brothers who want her to conform to societal expectations and ends up becoming a sleuth herself, outwitting her famous brother and even attaining her own jaunty hat. As she embarks on this journey she becomes involved in a dangerous plot that involves a mysterious young lord who she must protect.

A coming-of-age detective story, it sees Enola breaking the fourth wall and offering a direct frankness to her audience like a junior Fleabag. Its an anarchic, youthful rampage through Victorian Britain and literary history that’s sure to raise a few dusty eyebrows.

American Murder : The Family Next Door

Sept 30th
Told through footage that includes home videos, text messages, social media posts and local news reports, American Murder: The Family Next Door pieces together the tragic story of Shanann Watts who disappeared along with her two young daughters in 2018. What unfolded was a case that made headline news around the world. The documentary is a devastating examination of a disintegrating, destructive marriage and a community that was shaken with disbelief.