I Hate Suzie: Billie Piper shines as a phone-hacked actor with a messy life

TV Review: The new drama series about a 35-year-old self-absorbed, shallow and self-destructive singer and actor is disconcerting 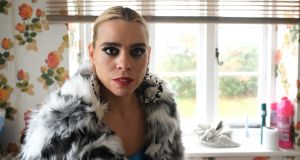 The aptly named Suzie Pickles is a mess. A pop star in her teens, turned sci-fi actor in her 20s, now she’s 35 , living in a cottage in the English countryside with a five-year-old son she adores, chickens, a career reigniting with a Disney princess role (she’s too old, “but apparently that’s the joke”), and unhappily married to an unpleasant drip.

If some of Pickles’ circumstances in the new drama series I Hate Suzie (Sky Atlantic, Thursday) coincide with those of its star – teen-popster-turned-Doctor-Who-actor Billie Piper – no matter. This series created by Piper and writer Lucy Prebble (they did drama Secret Diary of a Call Girl years ago) takes on a life of its own, tumbling through the outfall after a hacker publishes sexual photographs stolen from her phone. The stages follow those of grief, starting with the first 30-minute episode Shock, and continuing with Denial.

Pickles is self-absorbed, shallow, self-destructive, unreliable and not terribly likeable. But wait, meet her selfish, joyless, vindictive husband, Cob (Daniel Ings). To be fair, the photos did involve a penis that was not his, but there’s not an ounce of humanity – so far anyway – for his partner whose intimacy has been publicly mauled. Her only ally in this cross section of characters at a moment of unmasking is friend and manager, Naomi (Leila Farzad), smart, fearless and sardonic.

Public humiliation and a life unravelling may sound miserable, but there are laugh-out-loud lines and ridiculous situations, from the passive-aggressive magazine journalist who arrives for a shoot just before the hacked photos burst onto the internet, barely recalling the teen star and gushing she’s “so pleased you’re still doing stuff”, to a disastrous Comic Con Q&A (“who doesn’t love Nazi zombies?”), where Pickles woefully attempts to diffuse the scandal by denying the photos, cheerily advising “don’t wank to lies, kids”.

Piper’s performance is a glowing light, with an open face laying bare the confusion, horror and panic, even while attempting a veneer of professionalism.

The dialogue is snappy and sharp, and the tone switches are great: Shock electrically captures the frozen horror, mad panic and chaotic black comedy when the story is breaking even while the irritating photoshoot team trample through her home. Denial’s style is darker, with terrifying sci-fi fans and a cocaine mess as Pickles makes a bad situation worse. Initially, the occasional bursts of song are disconcerting, but disconcerting is the name of the game here; just go with it.

I Hate Suzie has unexpected and entertaining twists so far; intriguing to see how it turns out for the mostly unpleasant characters as the other episodes unfold.

The Music Quiz: What was Shane MacGowan’s first band called?
5

Michael Kiwanuka: ‘If you’re a creative, you don’t try and be that, you just are’
6

Writer’s block: how to be creative even in crisis
7

Patrick Freyne on Christmas ads: ‘No one belongs on the naughty list.’ This should be big news
10