The twins who broke the internet with Phil Collins video: Here’s their verdict on U2 and Hozier 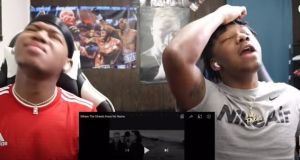 Tim and Fred Williams react to U2’s Where the Street Have No Name. Photogaph: YouTube

Have you ever mentally pictured a scenario in which aliens landed on Earth from outer space and heard U2 for the first time? Well, thanks to the internet, you need wonder no more… kind of. The internet will never stop marvelling at the giant chasm between young and old. Whether it’s a millennial haplessly poking a rotary phone or a youngster looking at a cassette like it was dug up from the ground, we’ve gotten the message by now – the young are a breed apart.

YouTubers Tim and Fred Williams have lived a relatively sheltered sonic life, they’ve managing to get to the age of 22 without hearing Phil Collins, U2, Hozier or Janis Joplin (the Indiana twins, huge fans of hip-hop, are reportedly steeped in gospel music by exposure) Yet the gaps in the twins’ musical education have turned out to be the online audience’s gain.

The two young rappers went viral after recording themselves listening to Phil Collins’s In The Air Tonight (1981), complete with the only commentary on the song you’ll ever need. “Let’s wake ‘em up!” Tim enthuses as the iconic drums kick in. Before the pair could even cool down from their enthusiastic chair-dancing, their YouTube channel TwinsTheNewTrend racked up five million views. In the US, the song went to No 1 on college radio.

They have also turned their lovable critical acumen to Frank Sinatra, Prince Nirvana, Pavarotti and Whitney Houston, Rolling Stones and Dolly Parton. The latter responded on Twitter: “No point in begging . . . Jolene already stole these two.”

The reaction video is nothing new, yet watching the Williamses discover, in real time, the genres that have been the cornerstones of rock and pop for decades, is surprisingly charming.

U2’s Where The Streets have No Namefares reasonably well under the twins’ appraisal. “Never heard of them before – looks like a good band, I dunno,” Tim shrugs before noticing “them church pianos” and offering up some helpful air-drumming (irresistible, to be fair) and some approving murmurs.

“I love the soul they have… they’re cold,” is Tim’s final verdict on that, as every Irish person ever wonders what life must be like to be an adult and have never heard of U2.

Van Morrison’s Brown Eyed Girl loses the brothers a little midway through. “It sounds like they got a little funk in there or something,” offers Tim.

Hozier’s Take Me To Church, in spite of its gospel top notes, catches them off guard. “He just literally came off the beat,” they marvel. Later, Tim is moved to press pause. “Bro, why does this song make me feel hurt, like I did something wrong? That’s powerful man, makes you feel emotional. If your voice can change someone’s mood like that, well that’s crazy.”

TwinsistheNewTrend a refreshing change from typical TikTok fare: often we think that kids would rather die than listen to their parents’ music collection, but as the brothers Williams show, there’s plenty of life left in the rock classics yet.

“There’s no computer or autotune,” Fred remarks at one point of the Phil Collins track. “They just focus on voices, beats and instruments. It’s just interesting how they can make a song like that.”

Fans and subscribers are encouraged to suggest classics for the twins to listen to, and naturally our minds are racing about classics they can wrap their ears around. Without further ado, can we see please see reactions to the Saw Doctor’s N17, Enya’s Orinoco Flow, Christy Moore’s Lisdoonvarna and Daniel O’Donnell’s Rivers of Babylon? There isn’t enough head bobbing in the world, frankly . . .