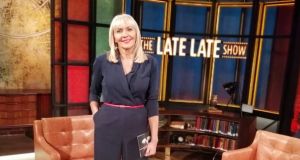 In moments of crisis we cling to the strangest things. With coronavirus, it turns out Irish households can’t bear to go without a king’s ransom in sliced-pan and mid-range toilet roll, and a weekly infusion of the Late Late Show.

Back in that strange, half-forgotten time when we did outlandish things such as take public transport and go to pub, the Late Late seemed to be wobbling on its last legs. However, a global pandemic and existential threat to our way of life has given it a new lease of relevancy.

That’s never been truer than tonight as Miriam O’Callaghan creates history by becoming the first woman to take the captain’s chair of the closest thing in Ireland to a broadcasting institution.

She’s in for Ryan Tubridy, absent with a persistent cough. And it’s a bit of a mixed bag. Are you allowed say that at a time of national crisis, when everyone, RTÉ broadcasters included, are putting shoulder to wheel? I don’t know – but, still, that’s the truth.

A low-level air of impending doom hums in the background, filling the silence where the audience and its applause should be. Occasionally, it’s like watching a negative image Toy Show. Instead of Tubridy dressed as a Disney character and over-confident seven year-olds refusing to follow the script, it’s all jittery conversations and celebrities showing us the underside of their chins via Skype.

Outside of Twin Peaks: The Return and the Mrs Brown’s Boys chat-show it’s the most deeply surreal chunk of prime time TV I can recall sitting through. But perhaps it is apt that the tone is all over the place. That’s what day-to-day life is like now, after all.

One minute there is a sense of being becalmed in a purgatorial long weekend that never ends. The next it feels as if the world is about to fall apart. And then it’s back to becalmed again. Somehow the Late Late Show has captured the slightly nauseating yin and yang we’re all negotiating today.

That said, it is obviously a mistake to begin by recycling old footage of members of the defence forces, gardaí etc trooping around the RTÉ car-park bashing out the Late Late theme. Judging by Twitter more than a few viewers understandably think that what they are seeing is live (it’s actually from the beginning of the season). And they are puzzled by the blatant flouting of social distancing protocols (plus: is there anything more miserable-looking than a Garda forced to toot a trombone on live TV? ).

The tuneful stomping about goes on far too long. But then finally we cut to O’Callaghan. As a broadcaster she is in many ways the anti-Tubridy: calm and calming, with a beatific smile.

And, as has become the tradition on the Late Late lately, the broadcast begins with contributions from medical experts, including Minister for Health Simon Harris – there are rings around the rings around his eyes – and the HSE’s Chief Clinical Officer Dr Colm Henry.

O’Callaghan also talks to front-line staff – a doctor, nurse and so forth – who repeat the message that we all need to stay at home and be as anti-social as possible.

There was a time, which we can all dimly recall as if from a dream, when it would have been quite funny to see five adults standing metres apart, as if being punished for unspecified naughtiness. In this new reality, it is merely depressing.

The tone is generally sombre. O’Callaghan chats by Skype to comedian Brendan O’Carroll and his wife Jennifer Gibney from Florida. O’Carroll cracks a joke about the Kama Sutra and that tiny shrivelled place inside you shrivels a little more.

Then it’s Derry Girls’ Nicola Coughlan and Brian O’Driscoll, who somehow managed to find someone to give him a haircut, and outlines his plan to learn to bake scones.

The Skype is clearly the limit as we subsequently touch base with Dara O Briain, logging in from London and just as baffled by what’s happening as everyone else.

He is followed by Hozier, who, as part of a fundraising initiative for Childline, wows social media with a heartfelt performance of the Parting Glass. Dedicated to those who have lost their lives due to coronavirus his rendition strips the bone from the song and exposes the marrow beneath.

Hozier’s scraggly pony-tail shakes sadly as he croons. It’s as if it is taunting the rest of us with a preview of what our hair is going to look like should the shutdown extend past Easter (my demonic sideburns are already slaloming toward the “half-Hozier”).

The truest jot of wisdom comes from iconic GAA commentator Mícheál Ó Muircheartaigh. Born in 1930, he grew up among relatives who survived the Spanish Flu epidemic of 1918 (an aunt in New York was not so lucky). He quotes an old Irish-language proverb from his grandmother which says that we should “wake with enthusiasm at the dawning of the day”.