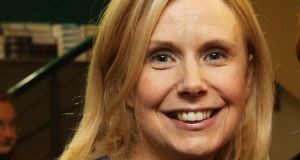 RTÉ journalist Martina Fitzgerald is leaving the State broadcaster after being replaced as political correspondent earlier this month.

The broadcaster announced Fitzgerald’s departure in a statement, two weeks after Paul Cunningham, a political staff member, was appointed to the role following the advertising of the position in an open competition within RTÉ.

“Some good news,” the journalist tweeted, posting a copy of the RTÉ statement.

“Looking forward now to a lovely Christmas and new adventures in 2019. Thanks to everyone for your loyalty and decency. Happy Christmas!” she said.

The broadcaster said at the time she was moved that she would continue working as a journalist for RTÉ News.

RTÉ colleagues say the broadcaster made a settlement offer to Ms Fitzgerald who is pleased with the outcome.

The offer is understood to have followed consultations between her legal team and that of RTÉ, and the threat of legal action.

Colleagues say she will be in no rush to make any early decisions on future career moves due to her settlement.

Her departure from the high-profile role drew sharp criticism of RTÉ in political circles.

Minister of State at the Department of Education Mary Mitchell O’Connor tweeted earlier this month that she was “very disappointed and annoyed” over RTÉ’s decision to move her. The Minister said that “one of the most high profile women in media” had been “taken out”.

Fitzgerald had worked for RTÉ for almost 18 years and had held a number of different roles before becoming one of the most prominent faces of the broadcaster’s political coverage just over five years ago.

She reported on the 2016 general election and the same-sex marriage and abortion referendums.

“I loved every minute reporting on political developments – and providing analysis and context – for RTÉ’s audience,” she said in the statement.

“Thank you to my colleagues who helped me with all this work and to everyone for their loyalty and decency.”

Jon Williams, managing director of RTÉ News & Current Affairs, said she had been “an integral part of RTÉ’s extensive and substantial coverage of general elections and referendums and other important and significant political events over the past five years. We wish Martina every success in her future endeavours.”

Fitzgerald authored a recent book on women in politics called Madam Politician which was based on interviews with the 17 surviving women who had served at cabinet.

She was one of the more outspoken critics within RTÉ during the controversy last year over claims of a gender pay gap among staff at the station after it emerged that RTÉ Six One presenter Sharon Ní Bheoláin received significantly less pay than her co-anchor Bryan Dobson.

“If prominent women in the industry I work in can trigger a wider public and long overdue debate – and affect change – then by our actions other women may also benefit,” she wrote in The Irish Times last year on the debate on gender pay equality.

“This is irrespective of what industry they are employed in.”