The Long Song: A touching tale of British colonial cruelty 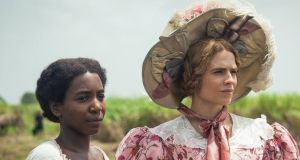 The Long Song is told from the perspective of July (Tamara Lawrence), a young house slave, conceived by rape and stolen from her mother.

If they did not involve such cruelty, dehumanisation and violence, the simple desires of British colonialists to recreate their home comforts in faraway lands would be almost touching.

The Long Song (BBC One, Monday, Tuesday, Wednesday, 9pm), the BBC’s three-part adaptation of Andrea Levy’s 2010 historical novel, begins with the mistress of a sugar plantation barking commands for a traditional English Christmas party to take place in the tropical climate of Jamaica. It will have carol singers and roaring fires and 100 beeswax candles to light up the room – as is the fashion in early 19th century London. “Look at all these candles,” remarks one of her guests some time later. “I don’t know how we shall stand the heat.”

There is a dumb brutality in trying to impose the structure of one culture upon another, Levy’s story knows. This adaptation, written by Sarah Williams, opens with a brief parody of a Jane Austen introduction, listing the tribulations of a plantation lady “from the scarcity of beef, to the want of a fashionable hat, to . . . a suitable man to marry”, before its narrator shifts into a stridently Jamaican patois: “But if that is the story you wish to hear, then be on your way! For the tale I have to tell is quite a different one.”

That’s certainly true on one level. This story is told from the perspective of July (Tamara Lawrence), a young house slave, conceived by rape and stolen from her mother, a field slave, then renamed Marguerite and groomed to be a handmaiden to the obtuse, isolated Caroline (Hayley Atwell).

That she is much closer to a modern hero, though, is made abundantly clear: stealing pearl buttons, undermining the mistress and daring to enjoy her youth. Atwell’s performance, moreover, on the edge of caricature, is equally pathetic as monstrous; in Lawrence’s sprightly performance and the contemporary brio of the direction, you see yourself.

That makes one sequence especially fascinating, when – believing that the whites have run for their lives following a slave revolt – July struts through the house in imperious emulation of her mistress, barking orders at herself. “Marguerite!” she says giddily at the dressing table. “Come do my hair!”

Colonisation works on the imagination too, imposing its own fantasies on the subjugated.

There is a shiver of that in Levy’s story too, whose Jamaican parents arrived to Britain in 1948 on the Empire Windrush. It may not follow Austen but even in relating Jamaican experience it cleaves to elements of Victorian melodrama. July, consummating her passion in her mistress’s bed with Nimrod, a young freed slave, invites “The Consequences”, as one chapter title tell us.

From under the bed they witness the master’s suicide! Nimrod is framed for it! But they escape just before Nimrod is shot! But they are found shortly after and Nimrod is killed, with July next! But her long-lost mother intervenes at the cost of her own life! But July is pregnant! And so on!

The first episode ends with the final, belated news of the end of slavery, but it will not stop there. “If only my tale was so simple,” says the narrator. You hesitate to contradict her, but for all its tortuous plot developments this, on the surface, is hardly a complicated tale.

Indeed, the most cheering thing about it, is it is a mainstream British entertainment with enough room for serious performance by Lenny Henry. Within it, though, are some riveting tangles: all the dispossessions, acquirements and, latterly, invigorating exchanges of postcolonial drama.

If that is the story that you wish to hear, stay tuned.