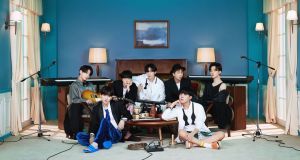 BTS: the Korean seven-piece are the first non-western act to top the global pop chart and the first act who don’t sing predominantly in English

It’s official: K-pop is now the world’s most lucrative music, and if you’re young, talented and from South Korea you have as much chance as any westerner of pop superstardom. The phenomenon that first made its presence felt here a decade ago, via the Psy megahit Gangnam Style has finally, er, come of age.

On Thursday the International Federation of the Phonographic Industry announced the winner of its Global Recording Artist of the Year award for 2020, and few will be surprised to hear that it’s BTS, the K-pop seven-piece who have become Asia’s answer to One Direction.

Dynamite, the first song BTS recorded wholly in English, became their first US number one, propelling their album Map of the Soul to the top of the charts in more than 20 countries

BTS are now the biggest unit-shifters on the planet, toppling Taylor Swift from the slot she occupied the previous year. They are the first non-western act to top the global chart and the first act who don’t sing predominantly in English.

Their 2020 single Dynamite was the first song the group recorded wholly in English, and it became their first US number one, propelling their 2020 album, Map of the Soul, to the top of the charts in more than 20 countries.

“BTS are a global phenomenon,” says the federation’s chief executive, Frances Moore, stating the bleeding obvious. “They have had another outstanding year, releasing three albums, and continually finding creative and engaging ways to share their story with the world. They truly show the power that music has to bring joy and happiness to people the world over.”

They also show the power of having a well-oiled entertainment machine to bring your “story” to every corner of the globe. BTS have been groomed for superstardom by the Korean label Big Hit, and such has been their success that the company, run by Bang Si-Hyuk, is teaming with Universal Music in the United States to manufacture another boyband phenomenon that could outstrip even BTS’s success.

Megabands like U2 and Coldplay might have raked in the millions from concert sales in pre-pandemic times, but 2020 was all about record sales. The IFPI award is calculated by tallying sales across all formats, from digital streaming to physical sales of CDs and vinyl records. (Yes, BTS even release old-fashioned LPs.) Sales of an artist’s entire musical output is counted, not just their current release.

Taylor Swift comes in at number two having released two highly acclaimed – and chartbusting – albums in 2020. The Canadian artists Drake and The Weeknd come in at numbers three and four, with Billie Eilish taking the fifth slot. The veteran rapper Eminem comes in at number six on the back of his megaselling 2020 album, Music to Be Murdered By, while Juice Wrld is at number nine – a posthumous recognition for the late rapper, who died in 2019 from an accidental overdose of painkillers.

The Choice song of the year award went to Niall Horan, who topped the IFPI global top 10 back in 2013, when he was a member of One Direction. Those were the days, eh?

At the other end of the megariches scale, the winner of the RTÉ Choice Music Prize album of the year was announced on Thursday night. Denise Chaila, the Zambian-Irish rapper from Limerick, scooped the award with her debut album, Go Bravely. It may not make her a multimillionaire, but it does net her €10,000 in prize money, and it’s a great endorsement of this artist’s talent, plus an inspiration for women of colour working in the Irish music industry.

Chaila’s music tackles racism, exclusion, sexism and her own identity in the country she has lived in since the age of three. Technically, this is her second Choice win – she sang on Let the Dead Bury the Dead, the album by the rap trio Rusangano Family, which won the prize in 2016.

The Choice song of the year award, voted for by the public, went to Niall Horan for his song No Judgment, from his second album, Heartbreak Weather. The Mullingar star topped the IFPI global top 10 back in 2013, when he was a member of One Direction. Those were the days, eh?