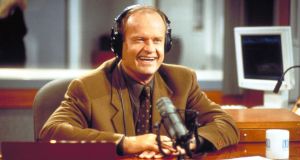 Break out the Dom Pérignon Plénitude: Frasier is back in the building. TV’s most lovable pompous, insufferable snob is returning to our screens after 17 years, and fans of the classic TV show will smile wryly at the return of what many (moi included) consider to be the greatest sitcom of all time.

Kelsey Grammer is reprising his role as the radio psychiatrist Dr Frasier Crane in the rebooted series, which is currently going into production and will air on Paramount+, a streaming service being launched by ViacomCBS next week.

This will be the fourth series featuring the iconic character, who began life on the 1980s sitcom Cheers before getting his own series in 1992 (after a few stop-offs in the Cheers follow-up series Wings). Frasier is now one of the longest-running fictional characters on US TV, and if this reboot takes wings it could put Dr Crane at the top of the longevity charts.

“Having spent over 20 years of my creative life on the Paramount lot, both producing shows and performing in several, I’d like to congratulate Paramount+ on its entry into the streaming world,” Grammer says. “I gleefully anticipate sharing the next chapter in the continuing journey of Dr Frasier Crane.”

Grammer has been keen to get the show back on screens ever since Frasier ended, in 2004, after 11 series, but was adamant that the storyline and scripts had to be just right. There was no doubt in viewers’ minds that the original Frasier got everything just right. From the highfalutin’ banter between Frasier and his brother, Niles (played by David Hyde Pierce) to the fractious relationship between Frasier and his dad, Martin (John Mahoney), and Niles’s unrequited (at least until the end) love for Martin’s care worker, Daphne (Jane Leeves), Frasier was a finely balanced ensemble piece that blended the subtler elements of situation comedy with the immediacy and vigour of live theatre.

The best thing about Frasier was that it didn’t play down to its audience, instead trusting that viewers were intelligent enough to get the high-brow humour. The show avoided dumb gags and silly, stereotypical characters, going instead for more understated – and more biting – humour delivered by well-drawn characters. The result was a show that garnered huge acclaim and swept up numerous Emmys and other awards.

There’s no word on whether Grammer will be joined by any of his erstwhile colleagues on this new series. Sadly, John Mahoney, who played Frasier’s dad, Martin Crane, died in 2018. A regular visitor to Ireland – he had Irish grandparents – he starred in several productions at Galway International Arts Festival between 2000 and 2014, including Eugene O’Neill’s Long Day’s Journey into Night and Christian O’Reilly’s Chapatti.

It’s likely that this new iteration of Dr Frasier Crane will be ensconced in a new job in a new town, with a new set of characters and situations to test his patience and puncture his pomposity. After all, it worked the first time around, when the producers of Frasier moved the setting from the east-coast town of Boston all the way to the west-coast city of Seattle.

We’re already humming the theme tune in anticipation, but will Grammer sing it again on the reboot? We hope so: we can’t imagine Frasier without those tossed salads and scrambled eggs.