Inside Ireland’s Covid Battle: You might be fighting tears before the first ad break

TV review: RTÉ reports, with great dignity, on the lives of Covid-19 patients at St James’s 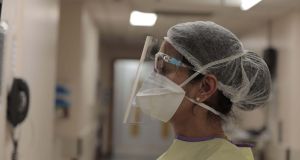 RTE Investigates: Inside Ireland’s Covid Battle reveals the harsh reality of life and death of Covid-19 for the patients and staff in St James’s Hospital and their families

Covid-19 is the nightmare that has spread to every facet of our lives, making even the simplest human interaction feel like a rolling of the dice. Yet for most of us this is largely an invisible terror. We exist cheek by jowl with the consequences of the pandemic. But we do not see it going about its grisly business first hand.

So it’s important that television such as RTÉ Investigates : Inside Ireland’s Covid Battle (RTÉ One, Monday) is made and that it is watched. This frontline report from a Covid-19 intensive care ward at St James’s Hospital in Dublin bears witness, with dignity and without sensation, to the lives lost and to the sacrifices of medical staff. (Part two, to follow on Tuesday, will focus on infection control and patient recovery.)

This is a tough watch – you’ll possibly already be fighting tears before the first ad break. But it isn’t exploitative and is respectful of those who have survived Covid-19 and of the 79 St James’s patients who died from the virus by end of May.

It’s distinctly dystopian in places, too. “The zipping up of a body bag is an awful thing to hear,” says Melissa O’Brien, a senior staff nurse, of the grim task of preparing a Covid casualty for burial. (They are wrapped twice over – a shroud within a shroud.) “It’s the last thing you hear when you close your eyes at night.”

“Human interest” is a trivialising expression in the context. But the RTÉ film crew make what is on balance probably the correct decision and flesh out the stories of several patients.

There is Betty Donnellan, who goes on a ventilator and so cannot communicate with her daughter, who is at home and on tenterhooks about her mother.

And we meet Joe Smith, initially over the worst only for his condition to decline rapidly. (He contracted the virus in hospital after being admitted with a kidney complaint.) As with Betty Donnellan, he pulls through in the end. But the fear and confusion on his face as he is told he will have to be ventilated are not to be forgotten quickly.

These are the “good news” stories. There are tragic ones also.

Patrick Commins, a previously spry 97-year-old, fights an ultimately futile battle against coronavirus. With his sister an ocean away in Canada, his comfort in his final days is provided by his carer, Lisa Connolly. She holds his hand and plays him his favourite trad song. As he is about to die she brings his suit and a treasured pocket watch.

“We hear about numbers constantly. They aren’t numbers,” says Gavin Connors, a nurse, his voice thick with emotion. “These are people – people who have loved ones. It’s heartbreaking. Even during normal times it gets to you. These aren’t normal times.”

Part two of RTÉ Investigates : Inside Ireland’s Covid Battle is on RTÉ One at 9.35pm on Tuesday

Marian Keyes: ‘What doesn’t kill us makes us funnier’
8

The books quiz: Who adapted his own crime novel for a BBC TV series?
10