Ray D’Arcy, almost overcome by calamity, presents his most memorable show in ages

Radio review: Glitches pile up as the host hears pandemic stories from all 32 counties 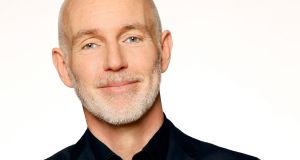 It’s Wednesday, and Ray D’Arcy is in danger of being overwhelmed by calamity. As well as dealing with numerous technical glitches – bad lines, dropped calls and dead air – the host begins to sound flustered as he runs perilously behind schedule. All this while talking to nervous-sounding guests appearing on air for the first time. In short, it’s his most memorable show in ages.

But if it resembles an extended blooper reel at times, this edition of The Ray D’Arcy Show (RTÉ Radio 1, weekdays) is as notable for its scope of intention and its manner of execution. Billed as the “#AllIrelandThankYou” (the hashtag is silent), the show features guests from all 32 counties expressing gratitude to those who have helped them through the pandemic. D’Arcy then gives proceedings that authentic lockdown feel by using Zoom to speak to his guests, some of whom have never used the ubiquitous video conferencing app.

On the face of things, it’s a gamble that risks turning D’Arcy’s high-profile act of appreciation into something more akin to event radio with chimps in the studio control room. But it comes off, even if the host doesn’t always sound confident that things are going the right way.

It’s a good show from D’Arcy, who can otherwise sound like he’s Zooming it in. On this afternoon, however, he conjures up a united Ireland

His first conversation with Michael, an 89-year-old Listowel man, sets the template. The first-time Zoomer is at times unsurprisingly hesitant as he thanks the local Meals on Wheels for feeding him and his wife while they cocooned. D’Arcy chuckles indulgently as his guest details his weekly menu, but Michael’s understated humour shines through, as does his sincerity: he helped set up Meals on Wheels in Listowel 45 years ago.

Subsequent guests underscore the human impact of Covid-19. Siobhan’s mother was the third person in Ireland to die from the virus, in March, and she delivers her thanks to “frontline heroes” with heartfelt conviction. Another caller, Catherine, is emotional as she thanks the carers looking after her mother, who has dementia. “People can tell by the tone of your voice how much it means to you,” says D’Arcy, for once stating the obvious to good effect.

There’s joy, too, as Clare recounts giving birth to her daughter, who’s too busy crying to join her on air. So life goes on.

All this is punctuated by the hiccups familiar to Zoom users, surely a majority of the population by now. D’Arcy regularly has to unmute guests or prematurely end conversations because of poor connections. (Not that Zoom will be complaining: on Tuesday, D’Arcy conducts an interview-cum-plug with the company’s Dublin-born chief information officer, Harry Moseley.)

More to the point, like any meeting, online or otherwise, the show takes time to get going, with some guests more bashful than others. The result is that the final few guests are allocated a generous 30 seconds each by an increasingly worried host. “We’ll have to fly through these,” he says, wasting more precious airtime.

But, otherwise, the cumulative effect of the contributions is to banish cynicism, as well as to agree with D’Arcy’s belief that such meetings mirror the spirit of togetherness that paradoxically marked the isolation of lockdown. “I’m getting a real sense of community,” he notes.

It’s clearly a robust spirit, surviving as it does the host’s lame geographical gags. Even preschoolers might deem lines like “Up in Down” long in the tooth. (Such wit is common; on Tuesday the presenter is gleeful as he talks to a quiz contestant from Fartagh.) Still, it’s a good show from D’Arcy, who can otherwise sound like he’s Zooming it in. On this afternoon, however, he conjures up a united Ireland.

Meanwhile, things are looking up for Off the Ball (Newstalk, daily). For the past three months, despite the total absence of any sporting events whatsoever, Newstalk’s sports franchise has puttered on, somehow managing to fill three hours of airtime every night, as well as an online morning show. But with football leagues returning across Europe, the programme can finally get back to its original purpose.

Oddly, however, the show’s most interesting items don’t deal directly with sport. True, the resumption of the English Premier League sees the host Nathan Murphy talking to the soccer pundit and former Republic of Ireland player Kevin Kilbane. Kilbane quickly slips back into the dressing-room argot of the genre as he discusses the underachieving Arsenal team.

A Newstalk fixture, Alan Quinlan doesn’t come across as a natural broadcaster. Here, however, he is open about his experience of anxiety and depression

Whereas successful Arsenal players previously had “kicked the s***e out of you” but had “class”, a later player like Cesc Fabregas was “a bit of a tool” who, if playing street football, would “get a slap”. It’s the kind of macho punditry that wouldn’t have been out of place in the 1970s, all the more surprising given Kilbane’s nice-guy image.

Happily, there’s more substantial fare, as when Murphy talks to Katie McCabe and Ruesha Littlejohn, the Republic of Ireland soccer players who last year came out as a couple. The conversation is zippy yet thoughtful, covering everything from the frustrations of lockdown to sexuality in professional soccer.

Even more revealing on Tuesday’s programme is the former Ireland rugby international Alan Quinlan’s show-within-a-show about mental health, titled How’s the Head. A Newstalk fixture, Quinlan doesn’t come across as a natural broadcaster, usually possessing the earnestly monotone delivery of a player ducking questions in a postmatch interview. Here, however, he is open about his experience of anxiety and depression as he discusses the subject with the former All Blacks star John Kirwan.

Perhaps inevitably, there’s a certain amount of guying around between the two ex-sportsmen – “Call me JK,” insists Kirwan, who has a knighthood for mental-health campaigning – but it only adds to the impact of their candour. Kirwan in particular describes being so depressed that he wanted to take his own life, only for a fellow All Black to talk him down. “My perception of mental illness was that it was a weakness,” he says: once he accepted it as part of life, he could deal with it.

Quinlan’s interview is honest, reflective and hopefully instructive. It also highlights Off the Ball’s key strength: it’s a sports show, but it looks beyond the game.

Radio Moment of the Week: No pressure for Ciara Kelly

No stranger to dramatic announcements since she told listeners she had Covid-19, Ciara Kelly again opens Tuesday’s Lunchtime Live (Newstalk) in arresting fashion. “I have to tell you, I’m slightly shook – I had a blowout on the way in,” she says, describing how she was “driving on nothing” before getting to a garage. “It could have been very dodgy,” she remarks, calling it “a funny start to the day”.

Kelly then goes on to host a wholly unremarkable show, which is of course a remarkable tribute to her professionalism. After suffering a potentially catastrophic puncture on a motorway, the hazards of being flat on air suddenly seem less serious.