Editorial waxes lyrical on statistics for births, deaths and marriages in 1866 and concludes with still-topical question 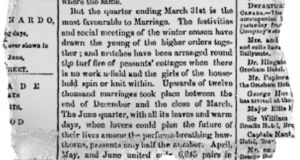 From editorial of June 14th, 1867: “Matches have been arranged round the turf fire of peasants’ cottages when there is no work afield and the girls of the household spin or knit within.”

But the quarter ending March 31 is the most favourable to Marriage. Matches have been arranged round the turf fire of peasants’ cottages when there is no work afield and the girls of the household spin or knit within. Upwards of twelve thousand marriages took place between the end of December and the close of March. The June quarter, with all its leaves and warm days, when lovers could plan the future of their lives among the perfume-breathing hawthorns, presents only half the number. April, May and June united only 6,045 pairs in matrimony. Quarter-day in Harvest produces even a smaller result–5,578. They were busy putting down the crops, clearing them of weeds, making the hay, gathering and storing the harvest, so they waited until the heavy work of the farm had ceased. In November, October and December the number of marriages began to increase again, for in that quarter were united for better or worse 6,114 pairs.

Those proportions are maintained tolerably equally through all the Provinces. Meath and Westmeath are not “marrying” counties. The former, with 83,497 inhabitants, had but 214 marriages; while Carlow, with only 51,802 residents, can boast of 235 weddings; and Westmeath, with 56,264 people, married only 137 pairs.

The Births throughout Ireland last year amounted to 146,237, of which 75,210 were males, 71,027 of females. The excess of males over females is very remarkable. The greater number of Births – 40,088 – occurred in the quarter ending with the close of March; but the excess is by no means proportionate to the excess in Marriages for that quarter. The numbers in the June quarter were 38,816; the September, 33,580; and in the December quarter, 33,753.

There were 93,598 registered Deaths in Ireland last year – 46,474 of males and 47,124 of females. More male infants are born, and fewer die than of the other sex. This is not the case in any other country so far as we are aware. The active, toilsome life of man exposes him to many perils and diseases. We believe that the explanation of this anomaly is to be found in emigration. Yearly a greater proportion of males than of females depart from Ireland never intending to return. These too often swell the death list of New York hospitals, but their names are not written on an Irish grave.

As we might expect, the greater number of deaths – 27,834 – occurs in the March quarter. The winter has told with deadly effect upon feeble or ailing frames. The number in the June quarter was 24,76, and there is a great diminution in the list. Only 18,751 died in the three months ending with September, but the cold began its work again, and the death roll for December rose to 22,260.

Read the original at iti.ms/1q03d1c

Selected by Joe Joyce; email from the archives@irishtimes.com

Book Ambassadors: What our envoys abroad are reading this summer
3

Juno Temple: ‘Real eroticism is about how somebody’s sweat tastes’
4