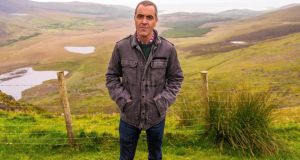 It turns out that James Nesbitt’s Ireland (UTV, Monday) is pretty much the same as the next man’s – that’s if the next man is preserved in 40 shades of green aspic and was making a publicity film for Bord Fáilte back when American tourists wore green polyester pantsuits and poured off tour buses. “Welcome to Ireland. The Emerald Isle. Its appeal is timeless and Ireland holds something for everyone,” said the Ballymena-born actor by way of introduction to this blarneyfest, an eight-part magazine-style travelogue that features what we’re supposed to believe are twinkly Nesbitt’s favourite bits of Ireland.

The real puzzle is who this series is for. It’s on UTV, but could anyone who lives on this island buy this misty-eyed begob-and-begorrah stuff? Nesbitt only appears in a couple of scenes in each episode; for the rest he provides the voiceover, never once faltering over such toe-curlers as “The Irish love to celebrate love, but then they love to celebrate most things.” He must be a better actor than I’ve previously given him credit for.

Inevitably, there’s much mention of that dread concept the “character”; in the real world it’s shorthand for a bore with questionable personal hygiene. “Ireland is full of characters. They can be found in every corner,” Nesbitt told us.

The wild-haired Kerry matchmaker Willie Daly is “an eccentric”; he showed Nesbitt around Lisdoonvarna during the town’s matchmaking festival. “Last year I’d say about 186 got married, related to the festival,” he said, a claim that went unchallenged.

There were items on a mobile pizza van in Dingle, the Galway races and a visit to the yard of the horse trainer Jessica Harrington: all fine ideas – RTÉ’s teatime programme Nationwide churns them out weekly – but packaged here with such shameless codology I became convinced this was some sort of wheeze dreamed up by people connected to the Gathering who are not above shaking the odd shillelagh. But no. I stayed tuned until the end to read the credits, and, astonishingly, James Nesbitt’s Ireland is an independent, unsponsored production.

Next week Nesbitt (or his production team) focuses on food, because, as he said, with no trace of mortification, “We’re a great big foodie nation, us Irish.” And if you can swallow that . . .

Inevitable that Endeavour (UTV, Sunday) would have a life beyond last year’s very good pilot; the 1960s-set drama featuring Morse as a young detective was recommissioned for four standalone, very smart-looking feature-length episodes. The first one aired this week, and on the strength of what was a pleasant, entertaining and classy drama, I expect there’ll be more.

Shaun Evans doesn’t look like a young John Thaw, but that doesn’t matter, because his gawky twentysomething Endeavour – we learned in Thaw’s final episode that it was Morse’s first name – is as spiky a curmudgeon as the older Morse, but without the air of weary distraction that age and too many dead bodies bring. And in Endeavour there are pints of bitter, classical music, crosswords, a Jag and, of course, Oxford, where we know from watching years of Morse that in any given week there can be at least three dead bodies, all in some way related to the university, and at least one shifty-looking academic. And as it’s set around posh English types there’s always a woman in a knee-skimming tweed skirt and twinset and pearls, whether it’s the 1960s or now.

This week Endeavour had to solve the mystery of a murdered secretarial student whose death was thought to be from natural causes until his superior sleuthing kicked in. Not that being the best new boy did him any favours. He was sidelined from the investigation by the new superintendent, who didn’t like his hypothesising and cerebral approach to solving crime. Demoted, he reminded his mentor DI Fred Thursday (a sonorous-voiced, scene-stealing Roger Allam), “I’m a good detective,” to which Thursday replied, “And a poor policeman. No one can teach you the first. Any fool can learn the second.” A classic Morse line that Thaw himself could have uttered.

The plot has never really been the point in Morse. It’s the characters, the atmosphere of gentle suspense, and the rambling, diverting way the killer is eventually unmasked. Endeavour had references to the atom bomb, a gay-sex subplot, a small-time blackmailer and drug dealer and a posh young single mother committed to a mental home because of epilepsy. Which all sounds a bit grim, but Endeavour , like Morse, is the sort of old-fashioned police procedural where the vicar’s stolen bicycle can hold the clue to the whole mystery. Though maybe the plot should get at least equal attention to the creation of all those gorgeous, sun-dappled scenes – the ending disappointingly strained all credulity.

There may be a pot-kettle element to someone who never missed a single tart-making, egg-breaking minute of The Great British Bake Off saying that The Great British Sewing Bee (BBC Two, Tuesday) is too boring to watch. But it is. Looking at a roomful of sewers competing to make the best A-line skirt or taking the trouser challenge – that was the second episode, and it involved making a pair of men’s pants, in case you thought it was something more racy – just doesn’t have the same identifiable appeal.

A rummage around the kitchen press and most of us have the basics to at least try something from The Great British Bake Off (or GBBO to us obsessives), but making clothes is seriously old-school: it takes ages, and you need a machine, fabric and some actual talent. And it might be absorbing to do, but it’s not a spectator sport.

Like GBBO , The Great British Sewing Bee has two judges, Patrick Grant, a fantastically well-groomed tailor from Savile Row who’s easy on the eye, and the sewing teacher May Martin, who’s nice but no Mary Berry. And Claudia Winkleman, its presenter, is tiny, puzzlingly orange and peers up from under her pelmet of a fringe with a face on her that couldn’t look more bored. I thought she’d pass out from disinterest as Grant banged on about the pitfalls of overlocking. Wisely, there are only four episodes; the final is next week.

I couldn’t care less who wins the Sewing Bee ; just because a baking competition became a viewer magnet doesn’t mean that putting Great British in front of any craft will guarantee a hit.