Eurovision 2018, The Bridge and Patrick Melrose: the weekend’s best TV

For more of nature’s charms, tune in to A Wild Irish Year and a Chelsea Flower Show A-Z 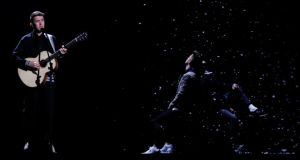 The Late Late Show
RTÉ One, Friday, 9.35pm
What’s the collective noun for a group of Eurovision Song Contest winners? A ballad? A dry ice? A key change, maybe. On the Late Late the evening before Ryan O’Shaughnessy performs in this year’s final, Johnny Logan and Secret Garden – who between them won the contest in 1980, 1987 and 1995 – sing You Raise Me Up, the Westlife hit written by Rolf Lovland of Secret Garden and his fellow Eurovision-winning songwriter Brendan Graham.

Ryan Tubridy will also be welcoming the former Ireland rugby captain Jamie Heaslip; the royal biographer Andrew Morton, who’ll be talking about what’s in store for Meghan Markle when she marries Prince Harry this month; and some of the young Irish people who feature in a new RTÉ documentary series, My Trans Life.

The Bridge
BBC Two, Friday, 9pm
Scandi noir’s not dead yet, and here’s a new series of the acclaimed drama The Bridge – the fourth and final season, in fact – to prove there’s still a bit of life in the old(ish) crime genre. Sofia Helin returns as the Swedish police detective Saga Norén, with Henrik Sabroe as her Danish counterpart Thure Lindhardt. It starts, as usual, with the discovery of a body, this time that of a woman, at the base of the Oresund Bridge. When she is identified as a senior official in the migration service it’s suspected her murder may be linked to a recent deportation case that hit the headlines. Lindhardt needs Norén’s help to crack the case – but she’s banged up in jail, convicted of murdering her mother.

The Graham Norton Show
BBC One, Friday, 11.05pm
Among the guests on Norton’s sofa are the Hollywood stars Ryan Reynolds and Josh Brolin, who star in the irreverent superhero sequel Deadpool 2, the former England, Manchester and Real Madrid footballer and Unicef ambassador David Beckham, and the Bafta-nominated actor Vanessa Kirby, the Crown star. Joan Armatrading will perform I Like It When We’re Together from her new album.

Eurovision Song Contest
RTÉ One and BBC One, Saturday, 8pm
Pour yourself a Prosecco and settle in for Europe’s annual musical extravaganza, as 26 countries bring out their best tunes, costumes and dance routines to win the grand prix of pop. The big news is that, for the first time in five years, Ireland has qualified for the final. With his “charming” ballad Together, Ryan O’Shaughnessy squeezed through Tuesday’s semi-final by a whisker – although Russia reportedly censored our segment because of its same-sex dancers. We probably won’t stand a chance against hotly tipped entries from Cyprus, Norway and Israel, but at least we’re back in business. Portugal hosts this year’s final, so Marty Whelan is at the Altice Arena, in Lisbon, to commentate for RTÉ – his 20th year in the role – while Graham Norton does the honours for the Beeb. As usual, it’s not really about the music: we’ll be watching out for the most outrageous costumes and choreography and the silliest lyrics (chicken noises are the new la-la-la this year), as well as spotting the political messages and bloc voting. But the big question is: will the Irish jury insult the UK entry again with nul points? If they do then we’ll deserve any bad Brexit we’ll get.

A Wild Irish Year
RTÉ One, Sunday, 6.30pm
You need to be on the ball if you want to film Ireland’s changing seasons, especially as the weather can go through all four seasons in a day. This new four-part series, filmed over a year, aims to distil Ireland’s seasons into one captivating documentary. In each episode the presenters, Tara Shine, Rob Gandola and Eoin Warner, travel the country to look at the natural world. They’ll visit coastlands, mountains, woodlands and farmlands, as well as towns, cities and villages, to reveal our deep connection with the changing seasons. The first episode looks at springtime.

The A-Z of the RHS Chelsea Flower Show
BBC One, Sunday, 6pm
Think of Jennifer Saunders and comedy, Dawn French and, perhaps, Adrian Edmondson come to mind. But gardening? Apparently she’s a dab hand at horticultural pursuits, which is why the BBC has asked her to copresent this programme with Adam Frost. It’s part of the broadcaster’s commitment to the Chelsea Flower Show, which includes 15 hours of coverage of the event itself, beginning on May 21st. Before that, Saunders and Frost look back at some of the most memorable moments in its history. There’s also a chance to meet some of those taking part in the 2018 event, including the prolific gold-medal-winner Sarah Eberle.

Also on the shortlist for the main entertainment-performance award are the Australian comedian Adam Hills, the Danish-British comedian, writer and actor Sandi Toksvig, and Michael McIntyre. Despite his recent problems, Ant McPartlin (and his mate Declan Donnelly) are the favourites to win best entertainment programme, for Ant & Dec’s Saturday Night Takeaway.

The Crown is expected to do well in the drama-series category, although it has stuff competition from Line of Duty, Peaky Blinders and The End of the F***ing World. Other big names in the running include Jessica Lange, Elisabeth Moss, Thandie Newton and Toby Jones.

Patrick Melrose
Sky Atlantic, Sunday, 9pm
Who is Patrick Melrose? Fans of the novels of Edward St Aubyn will know this chap pretty well, and Sky Atlantic is hoping we’ll all make his acquaintance pretty soon. But approach with caution: this Paddy is one toxic individual. Benedict Cumberbatch takes on the task of bringing St Aubyn’s dissolute creation to life in this five-part dramedy following Melrose’s spiral into drugs and depravity. It’s the mid-1980s, and poor little rich kid Patrick is living high off the hog on Daddy’s money, ploughing through a string of meaningless relationships and sedating himself from a traumatic childhood with every drug he can get his lily-white hands on. Devil, idle hands – you know the rest. The first episode finds Patrick in his usual state of drugged-up numbness, when he receives the news that his loathsome father has died and he has to go to New York to collect his remains. – Additional material: PA

Love poems: ‘For one night only naked in your arms’ – 14 poets pick their favourites
9

‘The Crying Game’: ‘They wanted me to cast a woman that was pretending to be a man’
10