Dragon’s Den is not the fire-breathing, wad-waving wealthfest it used to be

Nowadays, it has all the pizzazz of a business studies course and could be plausibly renamed Rich People Doing Sums 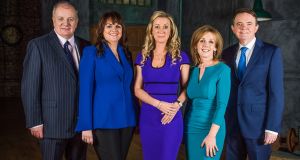 Five dragons sit in a cavernous warehouse judging the hopes and dreams of the common man: in this case Terry, who has invented socks for glasses.

The dragons scowl meaningfully and smile knowingly with stacks of €500 notes at their sides, but they don’t flaunt their money like in the good old days. Arguably, they have little joy left, eight seasons in. Chief dragon Gavin Duffy rarely shouts “money fight” any more, at least on camera. And none of the dragons leans back on their leather armchair, rubbing the money against their bare bellies while groaning indecently like you do when you have access to a big pile of money.

Yes, times have changed. Economies have boomed and busted and boomed again and Brexited and burbled since the programme first aired in the noughties. It is now the year 2278 or something (check your electronic device for the actual date, I’m a bit tired) and whereas in the early days of Dragons’ Den (RTÉ One, Sundays, 9.30pm), particularly the UK version, the dragons would pose brightly with totems of wealth at the start of each episode – cars, yachts, robot spouses, genetically reconstructed dodos, delicious panda-meat dinners and orbiting moon stations – now they appear gazing moodily out to sea like crusty old sea dogs or looming atop buildings like superheroes with a secret sorrow. The message is clear: money does not bring happiness. Having power over other people and their stupid dreams is what brings happiness.

Dragons have come and gone to bankruptcy or Newstalk or failed presidency bids or deep into the volcanoes of Doom Mountain where they slumber and feed. And so, apart from Gavin Duffy, who is functionally immortal, the rest of the current crop are newly hatched baby dragons really.

None of the dragons leans back on their leather armchair, rubbing the money against their bare bellies while groaning indecently like you do when you have access to a big pile of money

Other things have changed too. In the halcyon days of the late noughties, when people said “I am an entrepreneur”, they meant: “My delusional folly has been fuelled by an unprecedented credit boom and the pleas of my loved ones have grown faint beneath the sound of blood rushing to my head.”

And so, early participants in Dragons’ Den left good civil service jobs to pitch high heels for cats or chat rooms for babies and the money rained down upon them from the jewel-plated diamond-encrusted thrones (actually leather armchairs) of the indulgently judgemental dragons.

Entrepreneurs nowadays are a boringly sane bunch by comparison and Dragons’ Den is now filled with people who know the difference between gross and net profit and aren’t quite risking the starvation of their children for companies with names like FunkyPetz (editor’s note: good idea, Freyne, keep a record).

This week’s participants, for example, include the aforementioned Terry, whose idea isn’t as daft as I made it sound in the first paragraph. It’s actually a sensible device designed to keep glasses protected during hair-dying procedures.

Luckily, Gavin Duffy is a man of vision and soon has Terry toiling in his vast money mines

Some dragons are unconvinced. “Terry, I don’t know what to do with you,” says electricity provider Eleanor McEvoy, as though without her guidance Terry will wander the land for all eternity pitching tiny sleeves to good listeners. Luckily, Gavin Duffy is a man of vision and soon has Terry toiling in his vast money mines alongside the damned progenitors of previous gadgets and gizmos.

Then we meet the farm-bred sibling purveyors of a new chocolate milk product. “We are adding value to milk,” they say, proving their fluent knowledge of entrepreneurese. The dragons take this as a jargon-challenge. “There’s a ceiling on the sale due to the price point,” says newest dragon Chanelle McCoy, a sentence which is either a sign she’s having an aphasic episode or that she’s having the time of her life. It’s hard to tell with business folk.

Everyone perks up a bit for the next product because it involves human blood, and if I know one thing about millionaire industrialists, they love human blood. The dragons lose interest, however, when they realise it’s just a business offering blood tests and not life-extending-transfusions of the kind they have pumped into their incubation pods.

And then biscuit mogul (that’s a thing) Alison Cowzer is excited by Sarah Kiely’s pitch for health-improving “bone broth” and invests a portion of her biscuit bullion into Kiely’s broth cauldron. Bone Broth does sound like something dragons of all kinds, financial and mythical, might enjoy, which makes it a fitting conclusion to the episode.

All in all, I feel like Dragons’ Den has lost a certain something since the days when we still had hope. Nowadays, it has all the pizzazz of a business studies course and could be plausibly renamed Rich People Doing Sums. I’d favour them going back to showbiz basics and making the dragons wear costumes or maybe even do dragon sounds while they deliberate on their investments.

I mean, it’d be nice to hear Gavin Duffy going “Raaaaagh!” occasionally. And it would also be cool to see some of the original inhabitants of the Den showing up now and again: Bobby Kerr or Sean Gallagher or Socky or Zig and Zag. It was a good bunch.

TV zombies
The most recent season of The Walking Dead (Monday, Fox) ended this week. Rick, our hero (the worst leader since that king on Easter Island who said “Hey, let’s cut down all the vegetation, burn our boats and focus on creating a giant-head based economy”) has met some violent monosyllabic weirdos in a dump and now trusts them with his community’s lives.

The dump hobos, who took all of three apocalyptic years to shed the vestiges of western civilisation and normal speech (to be fair, I consider resorting to cannibalism after missing a meal), predictably betray Rick to arch-villain Negan. Then Negan (above), instead of killing Rick when he has a chance, twirls his bat and waffles at him like an oversharing, possibly lonely Batman villain.

He does, to be fair, accurately diagnose Rick as a “stupid little prick called Rick who thought he knew shit but didn’t know shit and got everyone he cared about killed”, which is also, I presume, what’s written in Rick’s biography in The Walking Dead show bible. Then a tiger attacks Negan (this should be exciting but it’s just a relief he stops talking, really) and Negan and his goons run away.

Amid all this, Sasha sacrifices herself, Eugene betrays everyone, Morgan stabs people with a spiky stick and Maggie makes a long boring speech (sounds like a day at work, says you).

Anyway, I can’t figure out who is stupider, Rick or Negan, but I fear it is those of us who are still watching. Could it be that it was we who were the Walking Dead all along? Yes. The answer is clearly yes.