David McCullagh’s first Six One News falls on a slow day ... then Stephen Donnelly turns up

McCullagh’s eyebrows don’t move, even when the health minister utters an alarming statistic 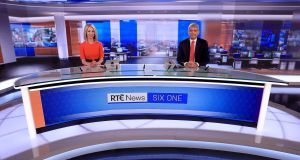 All over Ireland, children are facing their first day at new school, and there’s David McCullagh, new boy on Six One News (RTÉ One), facing his own first day. Having moved from Prime Time’s current affairs and analysis to the teatime news ship, he joined Caitríona Perry as co-host for the first time on Monday.

Following the hurly-burly in the news over the past 10 days, with revelations and resignations raining down daily, McCullagh’s first day at school came on a relatively quiet news day.

But it is relative, because no day now is uneventful. Mid-pandemic the 6pm news programme is a crucial reckoner of the day.

It was a very big day indeed for Kildare, with the immediate lifting of restrictions a week early, and people in Kildare sounded pleased but cautious at the move, based on a stabilisation of cases in the county.

Aside from McCullagh’s first day, schools themselves – both in terms of children and teens returning, and the significant reorganising of school buildings – featured in more than one reports.

The thoroughness of schools’ preparations was impressive, but footage of several halls and gyms subdivided to create more classrooms was stark, and sad. The pandemic is around for a while yet, and the loss of students’ facilities is likely to be for a considerable time; a case of underinvestment and overcrowding coming home to roost.

Viewers might have felt it was bittersweet to see a new permanent face in Keelin Shanley’s seat, vacant since the outstanding broadcaster died just before Covid-19 hit.

But shows go on, and this one smoothly and professionally covered a spread of stories: the burning of a house being refurbished for a Traveller family; drug gang convictions; Donald Trump’s latest shenanigans; Van Morrison’s 75th birthday: the threatened loss of hockey facilities for girls and women in Oranmore, Co Galway, as a pitch may change from 2G to 3G to facilitate GAA games instead.

How’s the interplay between the two hosts? The striking thing is that the format meant there’s none in evidence yet – the segments switch between the two accomplished presenters, and after the opening, it was well over 20 minutes before they were even in the same frame together.

In a tee-up on radio over the weekend, Perry talked about how the show divvies up interviews between the presenters, and McCullagh’s coin came up on day one, with Minister for Health Stephen Donnelly.

After the minister’s previous warnings about tipping points, he reassured viewers that the county lockdowns meant a jump from meat factory workplaces to workers’ homes had been halted before getting as far as nursing homes, and that early and targeted lockdowns worked.

At one stage, Minister Donnelly said that “before schools opened there were about 100 children a week were being tested positive”, which was an alarming statistic.

And in a quote that should be remembered, the Government minister unequivocally said one of the biggest learnings from Covid was that we need decent working conditions and decent living conditions. Now his Government needs to do something about that, the country shouted at their TVs.

So, first day in the new job, what about the eyebrows? McCullagh’s eyebrow communication, famously worth a thousand sceptical words, have not made a discernible performance yet on the Six One. But keep a watching eye.