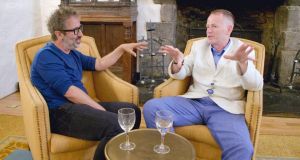 David Baddiel is seated on a bench in the middle of Ennis explaining why he isn’t Louis Theroux. “What he’s very good at is, with people who have extreme and unpleasant views, smiling and drawing them out. To some extent I just want to punch this bloke in the face.”

The comedian and descendant of a Jewish family that narrowly escaped the Nazi death camps (not all of his relatives were so lucky) is in Clare to meet Holocaust denier Dermot Mulqueen. This is at the end of Confronting Holocaust Denial with David Baddiel (BBC Two).

We’ve already been on a gripping journey with the Londoner, as he tries to understand why something as extensively documented as the Holocaust has been seized upon by conspiracy theorists as historical fake news.

Sad to say, Mulqueen looks certain to achieve some meme-worthy notoriety on the back of his walk-on part. He dresses in a white linen suit, like a sort of Tom Wolfe of the mid-west, and believes the fact that Jews buy German cars means the Holocaust can’t have happened (Baddiel obviously proves his point by admitting to owning an Audi).

Mulqueen has also brought along his guitar and performs a self-composed ditty in which he rhymes “Mercs” with Auschwitz and its “perks”. No you haven’t fallen and banged your head. You are actually watching this.

The fact he’s Irish really shouldn’t detain us. Every country has these sorts of individuals. Nor would it really be appropriate to dwell at length on Baddiel’s unhappy track record of ridiculing Irish people. A notorious 2004 episode of Fantasy Football, his laugh-free two-hander with Frank Skinner, made lame jokes about the Irish and terrorism, and dressed Ray Houghton as a potato.

The disturbing thesis of his new documentary is that when the internet allows us believe whatever we want, even the Holocaust is up for debate.

Baddiel does his best to empathise with oppressed people in the Middle East, where, he says, Holocaust denial runs at more than 80 per cent. And he tries to take a measured look at the revisionism voguish in some countries, which involves downplaying local oppression of the Jewish population and blaming foreign occupiers.

Yet the most unnerving lesson he comes away with is that denial can work and already has to an extent. He visits Chelmo, an Nazi extermination camp in Poland. More than 150,000 people were murdered here yet most of us have never heard of it.

Its obscurity is easily explained. Long before the Allies rolled in, local Nazis systematically covered up all evidence of their crimes (victims’ remains were used as fertiliser). Secrets can be buried, atrocities scrubbed from the record.

Confronting Holocaust Denial is a timely and chilling reminder that in today’s world, the truth cannot be taken for granted.