Dancing with the Stars: ‘Bad boy’ actor Johnny Ward kills it on the dance floor 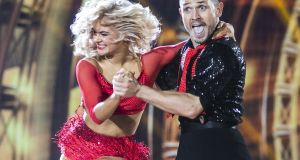 Johnny Ward and Emily Barker dancing a jive to Leif Garrett�s Johnny B Goode on Dancing with the Stars. Photograph: Kyran O'Brien

A riot of rhinestone, a geyser of glitter and an avalanche of opening night anxiety can mean only one thing – RTÉ’s Dancing With The Stars is back. Eleven deeply terrified celebrities are lined up for this year’s onslaught of salsas, tangos and American smooths. But who – aside from the RTÉ ratings department obviously – will be singing “we are the cha cha cha champions” when the competition ends 12 weeks from now?

Launch night is a bit of a boys evening in, with the blokes attempting to set the floor ablaze (with varying degrees of success) while their female counterparts count down to their debuts seven days hence.

The immediate frontrunner is “bad boy” actor Johnny Ward – he was in Love/Hate for a bit – whose jive with dance partner Emily Barker is a sweat-strewn tour de force. Slipping, sliding and madly waggling his eye-brows, he put in a scorching turn and scores a stonking 22 from the judges.

The other big ovation is for human Honey Monster Fred Cooke. The comedian’s tub-thumping turn to Sexy And I Know It, with partner Giulia Dotta, is only vaguely connected to the cha-cha they are allegedly performing. Yet sheer madcap enthusiasm – and the suspicion that confetti might start shooting from Cooke’s ears at any moment – wins over the crowd.

Alas judges Julian Benson, Loraine Barry and Brian Redmond are not quite blown away, as confirmed by their combined score of 12 – the numerical equivalent of a red buzzer noise.

The leaderboard as it currently stands, don't forget to vote for your favourite! #DWTSIrl pic.twitter.com/llTCKBUDgY

“It was sexy and you know it but it was stompy and you know it too....you reminded me of a crazy French farmer at harvest time,” says Brian. “You can dance, you threw the kitchen sink at it, I would like to see a little more cha-cha-cha... you may go far... keep the faith work on the steps, but well done,” adds Julian.

Nor is it a straight dash to the try line by former rugby pro Peter Stringer. Presenters Nicky Byrne and Jennifer Zamparelli are in a tizzy over his biceps (“you don’t eat bread!” shouts Byrne, accusatorially). Sadly, his Ricky Martin salsa, with Ksenia Zsikhotska, is a triumph of brawn over precision, and he scores a very average 16 .

“I was delighted to see you in the green of Ireland, I would have expected the lifts to be good, and they were... but it got a little bit stiff,” says a not-angry-but-disappointed Brian Redmond, relishing his role as the Simon Cowell bad guy on the panel.

The female contestants aren’t just watching from the wings. They face a stern challenge and it’s not clear whether they truly understood the severity of the task awaiting them. But before they are forced to make small talk with one person boy-bland Nicky Byrne, there is their group performance.

It’s a lively if confusing piece in which Eilish O’Carroll, Maireád Ronan, Demi Isaac Oviawe, Holly Carpenter, Cliona Hagan and Clelia Murphy pretend to be robbers participating in a heist. Very clever but the plot is slightly confusing, as someone appears to have stolen all their shoes (aren’t THEY supposed to be the burglars?) That’s three straight zeros for consistent storytelling, RTÉ.

Back to the blokes and Dublin footballer Dennis Bastick lifts up Valeria Milova during their American smooth and appears in two minds whether he is going to put her down again. Stylist Darren Kennedy, for his part, passes the ultimate challenge in staying cool when his glasses threaten to slide down his nose and on to the floor as he and Karen Byrne executed a steamy tango.

They score a 15 and 16 respectively – enough to suggest they may be in the shakedown later in the series. All the participants have a chance to do it all over again as there are no eliminations in weeks one and two.

One disappointment is that the celebs are all reasonably slick and none have the cult hero /nightmare fuel potential of last year’s break-out shirty dancer Marty Morrissey.

Meanwhile, new host Zamparelli trowels on the zaniness a little too much and her “banter” with Byrne withers and dies in real time. But she’s as perky as Byrne’s quiff and, just like the hoofers, is really just feeling her way in. Roll on next week as they women get to strut in earnest.