Baz Ashmawy: ‘I can’t be around people who don’t drink. There’s zero crack’ 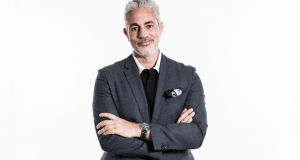 Baz Ashmawy forgets to introduce himself on the ‘Ryan Tubridy Show’.

He may have a hit television show under his belt, but if Baz Ashmawy is looking to make his name as a daytime radio presenter, he’s going the wrong way about it. For one thing, he forgets to tell his audience what his name actually is. Standing in as host of the Ryan Tubridy Show (RTÉ Radio 1, weekdays) on Wednesday, Ashmawy has been talking uninterrupted for 20 minutes, when he suddenly sounds an uncharacteristically sheepish note. “I’m getting given out to,” he says, “I didn’t introduce myself.”

The presenter, best known for his TV show, 50 Ways to Kill Your Mammy, has already held forth on how he quit smoking, how many mince pies he ate the night before and how scarred he is after a Christmas with “too many children and in-laws from Serbia”. Amid all this oversharing, you’d think he might have told his listeners who he is.

Perhaps by way of compensation, Ashmawy later reveals his nickname. During his interview with Laura Beston, a student who has given up alcohol for a year, Ashmawy recalls how he used to be called Fun Bazzy. He explains that his exuberance in social situations apparently resembled that of a drink-dependent character, Fun Bobby, from the sitcom Friends. As he lends a sympathetic and encouraging ear to Beston’s story, the host seems to concur with his guest’s verdict that alcohol is ultimately a depressant, noting that he too no longer drinks. (He has, by his own admission, “given up loads of stuff”.) Despite that, the host also remarks, “I can’t be around loads of people who don’t drink. There’s zero crack.”

With other presenters, such a lack of consistency might be a handicap. With Ashmawy, it’s a prime asset. In a radio world where strong opinions are increasingly de rigueur, he seems unsure what he thinks and, more to the point, doesn’t care if people know it. When he asks his audience about mobile phone etiquette on buses, he shifts his stance on the issue with each new response.

For all that the fortysomething broadcaster calls himself “an auld lad”, he still has the wide-eyed air of a perpetually excited but somewhat muddled adolescent.

He’s a perfect replacement host for a chat show in early January, when an ability to gab away is a prized quality

The corollary of this unfocused enthusiasm is an apparent lack of interest in political or social matters. There are no Tubridy-esque riffs on US politics, which may come as a relief to some. Instead, Ashmawy calls on his store of colourful personal anecdotes, recounting his experiences on an overcrowded Cairo bus. He also delivers his patter with inventive brio: he bemoans his teenage children having “the sleeping habits of Shane MacGowan”.

In short, he’s a perfect replacement host for a chat show in early January, when big topics and celebrity guests are in short supply and an ability to gab away is a prized quality. Just don’t expect his name to knock Tubridy’s off the marquee any time soon.

With much of the population embarking on the annual January ritual of turning over a new leaf, or at least attempting to, Teenage Dreams (RTÉ Radio 1, New Year’s Day) takes a novel look at our aspirational impulses. Cian McCormack talks to a panel of five guests to find out whether their lives have been shaped by, yes, their teenage dreams. Perhaps unsurprisingly, no clear answer emerges, but the programme is more thought-provoking than its slightly contrived set-up suggests.

If there’s a common theme running through the panellists’ diverse experiences, it’s that their careers have taken unexpected diversions: even by contemporary standards. The word “journey” is bandied about promiscuously. Author John Connell moved to Australia to become an investigative journalist before returning to Longford, where he fulfilled his original ambition to become an award-winning writer. Niamh Sweeney was an RTÉ journalist before completing an MBA in the US and becoming a top executive at Facebook. World champion boxer Kellie Harrington left her dream job in the army even as she pursued her sporting ambitions.

Depending on one’s outlook, such tales of success could be inspiring or intimidating, but the inquisitive McCormack keeps the conversation ticking along at a nicely judged pace. In quizzing his guests about their motives and uncertainties, he raises the same questions for his listeners.

His guests, in turn, talk about working hard for their achievements, but admit that circumstances were sometimes favourable when opportunities arose, for instance not having to raise children or pay a mortgage. “You have to work within the bounds of your own situation,” says Sweeney, cutting some slack for the less driven among us.

As to what advice they would give their teenage selves, McCormack’s guests offer positive if vague phrases. “Just relax and go with the flow,” Harrington urges, while Sweeney says, “Enjoy it when you’re on the journey.” It’s a gently uplifting start to the year, though probably not much use if you’re only looking for help on how to lose a few pounds in January.

An account of Limerick’s 2018 All-Ireland hurling victory told through the stories of four fans, Pure Proud (RTÉ Radio 1, Sunday) is marked by an almost irresistible feelgood factor, though listeners from Galway may disagree. Petula Martyn’s documentary captures the anticipation surrounding the final, as well as the time-honoured traditions of travelling to Croke Park: Limerick journalist Áine Fitzgerald laughs in mock embarrassment as she recalls packing tea and sandwiches for the drive to Dublin.

While the programme vividly conveys the joy of the occasion – Limerick had last won the hurling championship in 1973 – it’s less successful at capturing the tension of the match itself. No amount of clips of Marty Morrissey’s commentary on Galway’s late comeback (and there are many) can distract from the fact that Limerick won. It’s the documentary’s raison d’être, after all. But such quibbles dissolve in the face of the exhilarating emotions on show. “It was the best day of my life,” says Fitzgerald. For anyone grappling with a new year resolution, it’s good to know dreams can come true.

As its title indicates, Reasons To Be Cheerful (RTÉ Radio 1, New Year’s Day) aims to kick off the new year on a positive note. Sure enough, presenter Marty Morrissey adopts a bouncy tone as he looks ahead to 2019 with his guests. Starting off, Morrissey plays a vox pop in which Dublin shoppers are asked about their hopes for the next 12 months. One respondent dampens the mood, however, when asked if he’s looking forward to anything. “Absolutely not,” the man replies, lugubriously yet firmly. “My life isn’t great.” It’s hard to feel cheerful after that.