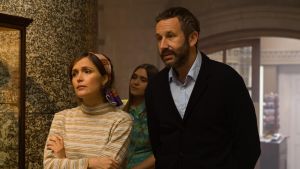 If this enchanting romantic comedy (what a rare, rare pleasure to write those words) had sprung from anyone else’s pen we’d be inviting Nick Hornby to contact Sue, Grabbit & Runn. All his trademarks are in place. The picture has something to do with a middle-aged bloke who devotes every spare second to study of a once-voguish rock star from the early 1990s.

Layering some menace with the on-the-spectrum goofiness, Chris O’Dowd helps update the concerns of High Fidelity to an era where – as life moves online – extreme fandom too often becomes properly toxic.

The good news is that, adapted from a 2009 Hornby novel, Juliet, Naked is not that character’s story. Rose Byrne throbs with sublimated frustration as Annie, an Englishwoman living tolerably with Duncan (O’Dowd) in a seaside town so lovely we yearn to call it Richard-on-the-Curtis. Some years ago the couple spoke of other things, but Duncan, a faffy academic with a taste for The Sopranos, now thinks only of the vanished Tucker Crowe (Ethan Hawke). After releasing one influential album and fathering too many children, Crowe eventually retired to live anonymously in a former partner’s garage. (Interestingly, Jess Peretz, the director, was the original bass player in The Lemonheads, a possible model for Crowe’s act.)

We undergo a delicious swivel when Duncan reviews a new collection of outtakes and, more than usually frustrated, Annie types a comment that gets picked up by Crowe himself. Confusions result.

We have long endured a standard formula in Lad Comedy that finds the women – sensible, though dull – nagging the lads – misguided, though fun – about their obsessions and excesses. The busy script and Byrne’s intelligent performance allow no such disingenuousness here.

It’s Annie’s story and, though Duncan is no monster, neither she nor Crowe allows the super-fan any excuses for his narcissistic single-mindedness. “He’s so gorgeous,” someone says when spotting a photo of Hawke on his computer. “Thank you,” he replies with not a whisper of irony.

As the picture progresses, Annie and Crowe edge downstage and invite us to wish for an ever-closer union. Few will resist. There are truths here about age. There are truths about the lies we tell ourselves. It ends very satisfactorily, but dares to leave at least one narrative thread dangling conspicuously.

How to be Nowhere: sharp, lyrical take on Central American violence
4

Why was James Joyce’s daughter Lucia written out of history?
9

Mary Trump: The inside story of why she wrote a tell-all memoir
10