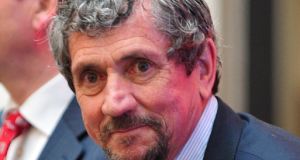 As Sarah McInerney serves out her final week as presenter of RTÉ Radio 1’s coveted mid-morning slot, it appears that Montrose management have missed an opportunity to give a platform to the voice of a generation.

But for all that McInerney has made a big impact as the temporary host of Today (RTÉ Radio 1, weekdays) – only to be displaced by Claire Byrne – hers is not the voice in question. No, it’s the unlikely figure of retired broadcaster Charlie Bird who emerges as a generational champion during his spirited, if occasionally opaque, interview with McInerney on Tuesday’s show.

When Bird rails against the restrictions being reimposed on over-70s, one can’t help thinking RTÉ missed a trick merely employing him as a star news correspondent for all those years. On this evidence he could also have been a polemical pundit and presenter.

“I’m not going to accept them throwing away the keys again for people who have a date on a birth certificate,” he fulminates, claiming the fresh measures are intended to distract from outbreaks in nursing homes, meat plants or direct provision centres. “Why should we be punished, when what should be dealt with are the real issues?”

There’s no doubting the strength of Bird’s feelings, which McInerney acknowledges are likely shared by many others. Even so, the host tries to reel her guest in a bit, suggesting the restrictions aren’t intended as punishment.

“Everyone has to have personal responsibility,” Bird replies, emphasising that he doesn’t want anything to happen to his five grandchildren or his friends. “But that does not mean I should stay inside,” he states firmly, asking why he should be deprived of walks in the deserted forests near his Wicklow home.

While Bird’s delivery can make him sound by turns grumpy and dotty, much of what he says is actually sensible

The conversation continues in this vein. Bird pivots constantly between righteous journalistic anger at Government nefariousness and personal irritation at his country strolls being curtailed, sounding like a cross between Peter Finch’s mad-as-hell newscaster in “Network” and Grampa Simpson. Even McInerney’s formidable interviewing skills prove futile in the face of her guest’s verbal onrush: after a couple of unsuccessful attempts to read out a text to Bird, the host quietly chuckles in resignation. Moreover, Bird sounds impervious to McInerney’s pleas that she has covered the “real issues” at times when he isn’t on-air.

While Bird’s delivery can make him sound by turns grumpy and dotty, much of what he says is actually sensible, once you parse it. Prof Tomás Ryan of TCD is similarly sceptical, if more measured, about the efficacy of the tighter rules for over-70s: “The Government has to be seen to be doing something,” he says, “But it’s not going to be effective.” (Bird, for his part, interjects with a full-throated “hear hear”.) Even so, it’s not the substance of Bird’s conversation that sticks in the mind so much as the rallying, rambling style. Nor is this a one-off. Since the pandemic began, Bird’s various radio contributions on lockdown measures have inserted him back into the national conversation, even if it’s not always clear what he’s trying to say.

As for McInerney, her brief tenure on Sean O’Rourke’s old slot has firmly established her as a broadcaster to be reckoned with. Whether grilling slightly hapless-sounding Minister for Transport Eamon Ryan or dissecting plans to reopen schools, she is rigorous and indefatigable, but with an appealing style that resonates with audiences. If O’Rourke was a hard act to follow, McInerney has set the bar even higher for her successor.

Over on The Hard Shoulder (Newstalk, weekdays), presenter Mark Cagney surveys the Government’s stricter regulations before tempting fate by asking whether it might all be over by Christmas. He’s not talking about the pandemic, of course, but rather the coalition. Talking to journalist Kevin Doyle, Cagney muses that amidst the party rivalries, political own goals and random anti-coronavirus measures of its short existence, the fraying administration’s fate rests on a single “endgame”. “If they don’t get the schools open on time, there’s a real danger this Government won’t make Christmas,” the presenter opines.

Such a dramatic prediction seems at odds with Cagney’s polished persona. Certainly, the erstwhile breakfast television presenter’s instinctive interviewing style is less hard shoulder than soft focus: while his smooth approach masks his reflective and analytical side, he’s a much more emollient presence than his predecessor, Ivan Yates. But Cagney has sharp edges too, and isn’t above stirring intergenerational tensions himself.

Joined by PR adviser Terry Prone to discuss the semi-lockdown for older people, Cagney says it wouldn’t be “gallant” to mention his guest’s age, which somehow only draws more attention to it. Not that Prone takes offence, being more exercised at the possible reintroduction of “apartheid shopping hours” for the over-70s. “I cordially ignored that advice,” she says, questioning its public health benefits. Prone also wonders whether the members of pandemic advisory group NPHET have become “vulnerable” to “pressure” from public comments by high profile experts such as Dr Gabriel Scally and Dr Sam McConkey, who are somewhat dismissively dubbed as “academic commentators”.

It’s a bracing conversation, if not wildly informative, followed by a vox pop featuring older interviewees claiming that “it’s the young people causing the problems”. Pursuing the theme, Cagney muses on the current generation of over-70s whose retirement plans were wrecked by the 2008 economic crash, and who looked on as their children were forced to emigrate. “They lost an awful lot,” Cagney says, rightly.

But he doesn’t stop there. “When younger generations are complaining how awful Covid has been for them, have a look at the previous generation and what they’ve sacrificed for you, before whingeing about how tough life is at the moment for you.” Well, that escalated quickly, as another Anchorman once commented – particularly when the only person complaining is Cagney. Charlie Bird isn’t the only one talking about his generation.

Radio Moment of the Week: Kathryn Thomas fries her best

Standing in as host of the Ray D’Arcy Show (RTÉ Radio 1), Kathryn Thomas asks the burning question: “What is your unusual fry-up addition?” Perhaps unsurprisingly, this is almost as contentious an issue as Covid-19 restrictions, as people nominate such ingredients as fried bananas, pickles, fillet steak, spaghetti hoops and fried apple. Thomas declares herself a woman of simple tastes. She can’t deal with trimmings such as hash browns and mushroom, she says, preferring sausage, bacon, scrambled egg and avocado. Wait, what? “I know, it’s far from avocado I was reared,” Thomas says meekly. In occasionally baffling taste it may have been, but the reaction to Thomas’s entertainingly frivolous breakfast question proves that the public welcome light fare amid heavier issues.