Caroline Aherne, writer of Royle Family, has died aged 52. Here are some of her most famous roles, in the Royle Family, and as the acid-tounged Mrs Merton. Video: BBC/Granada 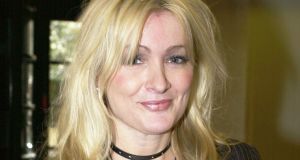 Comedian, writer and actress Caroline Aherne has died at the age of 52 after a battle with cancer.

The star was best known for her work in The Royle Family, The Mrs Merton Show and The Fast Show.

Neil Reading, her publicist, said on Saturday: “Caroline Aherne has sadly passed away, after a brave battle with cancer. The Bafta award-winning writer and comedy actor died earlier today at her home in Timperley, Greater Manchester. She was 52. “The family ask for privacy at this very sad time.”

Aherne, who co-wrote, directed and starred in The Royle Family, revealed two years ago she had been undergoing treatment for lung cancer in her home city of Manchester. She was born with a rare form of retina cancer and later received treatment for bladder cancer.

Aherne’s co-stars, fellow comics and actors and entertainers have been paying tribute.

Ralf Little, who played Denise’s brother Antony in the show, said Aherne was “a sister, real and (for me) fake”, as well as a genius and a friend with a “big, big heart”.

Sue Johnston, who played Barbara in The Royle Family, said: “I am devastated at her passing and I am numb with grief.”

Goodbye great Caroline Aherne. A gift & language that lives on.
"A vegetarian? That's a shame. Could she have some wafer-thin ham, Barbara?"

Actor and writer Mark Gatiss said Aherne was “so gifted” as he shared the “awful news”.

Comedian Sarah Millican said: “So sad. What a wonderful talent she was.”

Singer Ellie Goulding wrote: “So so sad to hear about Caroline Aherne. The Royle Family is one of the greatest British comedies. She really was a comic genius. Sleep well.”

This Morning host Phillip Schofield added: “So desperately sad to hear of the death of Caroline Aherne. Such a unique and gifted lady. Lots of love to all her family & friends X.”

Actor Max Beesley wrote: “Heartbroken to hear of the loss of my dear old friend #carolineAherne. She was a one off talent...”

Radio 1 presenter Nick Grimshaw wrote: “Ah I love Caroline Aherne! Such sad news to hear she’s died. So loved in the Grimshaw household. One of my favourites, rest in peace X.”

The daughter of Irish immigrants Bert and Maureen, Aherne grew up on a council estate in Wythenshawe, Manchester, and her first job was answering phones at BBC offices in the city.

Both Aherne and her older brother Patrick were born with the rare form of retina cancer which she was treated for into her 20s. She then underwent treatment for bladder cancer, the same disease that later took the life of her boyfriend Matt Bower in 1997.

Aherne, who had been a smoker, also spoke of her battles with depression and alcohol, following the breakdown of her marriage to musician Peter Hook, the death of her father, and struggles with fame. She spent time at the Priory clinic before moving to Australia to escape the public eye.

She made her return to TV in 2014 as the narrator of popular Channel 4 show Gogglebox. She was forced to take time off from the show earlier this year while she received treatment for the disease.