50 years ago today: Bing Crosby, workers’ strikes and a fine for deserting a cat 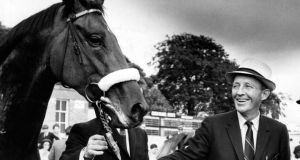 Mr Bing Crosby with his horse, Dominion Day, at the Curragh. Photograph: The Irish Times

Bing Crosby’s “coincidental” meeting with the mayor of Galway at Dublin Airport made the lead on the front page of The Irish Times on Oct 13th 1965, as the American singer started a three-day holiday here with his wife Kathy. Writing that it was “the kind of coincidences which are not quite coincidences” the unbylined Irish Times reporter went on to outline how during a television interview a friend came up to tell the singer that “the Customs wished to know whether he had a licence for his guns”. He did and produced a Spanish licence to prove it, explaining that the three 20 gauge shotguns were for “hunting partridge, pheasent and that kind of thing.”

Elsewhere on the front page, several members of the Irish Telephonists Association, against whom the department of Posts and Telegraphs recently obtained an injunction restraining them from picketing, resumed picketing duty. The bottom of page one heralded the case of “”Eight star soccer players banned from the game for life by the Soviet Soccer Federation because of systematic drunkeness.” A story that ran originally in the New York Times, the article outlined the efforts of the Soviets to curb drunkenness by “sending drunks to special institutions for treatment and compulsory labour”.

At home, it was a disastrous year for beet farmers, according to a report on page six, again by an unbylined Irish Times reporter, who wrote that there was “gloom among beet farmers.” Mr Bernard O’Neill, then chairman of the Irish Sugar Beet Growers association, added that “the season had also been disastrous for pea growers.”

Page seven of that edition published the strange tale of an English couple who were fined for deserting their cat and three goldfish when they moved house while an Irish husband went to Limerick Circuit Court to claim the £125 pools prize his wife had won “under the nom-de-plume Bingo”. The court decided that the man should receive £25, leaving the remaining £100 to his wife.

Advertising was healthy in quantity throughout the paper that day, although the marketing of Powers Gin, Carroll’s Cigarettes, Haig Whiskey, President cigarettes and the latest “economical” fan heaters didn’t promote such a healthy lifestyle. You could, however, earn a 4 per cent tax rate on investments from the EBS, a building society with assets over £11,000,000, their front page ad usefully explained.

The Goop Lab: A deep dive into the Gwynnieverse
8