Ticket Awards 2017: The best music of the year

Kendrick Lamar, St Vincent, Lorde, and SZA reigned supreme this year, while the Irish music scene has never been so vibrant 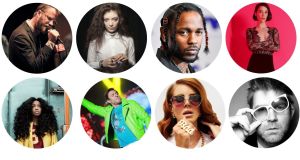 Our critics have picked their best beats from 2017 and now it’s over to you. Click on irishtimes.com/ticketawards to vote for your favourite artists from 2017. If you think we hit a bum note, nominate your pick in the space provided at the end of each category online. We’ll publish the results in two weeks and you’ll be in with a chance of winning one of our prizes.

It’s not just about music, though. Check out our cultural picks across books, film, art and television.

If the nominations for the Ticket Awards are anything to go by, the music landscape of 2017 belongs to Kendrick Lamar, St Vincent, Lorde and SZA. The solo act reigns supreme over rock bands, DJs, men in chequered shirts with acoustic guitars (mostly) and big pop overlords.

Alternative pop, hip-hop and R&B are the genres of the moment, with acts such as these four going for the jugular as they dissect and discard social norms, be they political, social or even romantic.

When it comes to the albums, Lamar’s Damn is ferocious. Lorde’s Melodrama is dark, SZA’s Ctrl is confident, St Vincent’s Masseduction is raw and Lana Del Rey’s Lust for Life is tough. Even though Ctrl is SZA’s debut record, we can easily look back on these five solo acts, who delivered five of 2017’s best albums, as a cultural stamp of our times. Ariana Grande didn’t release an album this year but she was nominated as one of our top solo acts. She showed phenomenal courage when she organised the Manchester One Love benefit concert, 13 days after the bombing at her Manchester Arena concert on May 22nd. Music in 2017 needed to be strong, and that’s what we got from these acts.

Annie Clark, the blessed St Vincent incarnate, has Best Album, Best Video, Best Gig and not one but two Best Track nominations. Her work is among a wonderful mixed bag of tracks. Both Drake’s Passionfruit and Calvin Harris’s Slide (featuring Frank Ocean and Migos) catch the fever of the throwback, hip-hop sound, creating understated and chilled-out tunes designed for a poolside party.

Producer Jack Antonoff is notable by his presence on Lorde’s Green Light and St Vincent’s New York and Los Ageless. Lorde, our moody pop queen, skipped the awkward coming-of-age stage in her career and on Green Light and her album Melodrama she instead creates jilting, obscure and dagger-sharp pop songs.

When it came to bands, LCD Soundsystem have had a mixed year. Their Olympia gig in September blew everyone’s minds (there was one bit during Tonite when the reverb was so loud that anyone standing near the speakers got a free blow dry), but their new album American Dream failed to make our critical top 10. It shows the power that a live show, nostalgia and a hearty back catalogue can sometimes hold over a new album. The same goes for The National: it doesn’t really matter what they release, all that matters is that they’re still around.

In the more niche categories, Irish acts struggled to make it in ahead of their international contemporaries, with Peter Whelan a notable exception. But the nominations for Best Irish Act are a full and vibrant spread. Pop, hip-hop, punk-pop, electronic, neo-soul, atmosfolk: we got it all. Newcomers Soulé, Le Boom, Shookrah, Mango, Pillow Queens and Dermot Kennedy made a huge impression on us, sneaking in beside our beloved Ships, Saint Sister and Rusangano Family. This list is a true reflection of how amazing the Irish music scene is right now. We’ve never had it better.