Elsewhere, interactive website Zoonosis offers a sideways look at how the pandemic is affecting us 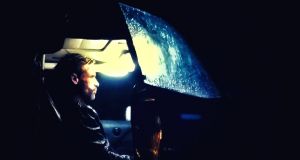 Fancy a trip? Fíbín artistic director Philip Doherty’s Fiach promises to ‘take you on a joy-ride of comedy, drama and suspense’.

The ever innovative Dublin Youth Theatre has come up with its own take for an online rendering of their big annual show. Zoonosis happens via an interactive website, where audiences make their own journey, guided by cast, through an online bedroom pop opera promising a sideways look at how the pandemic has impacted our species.

With a team including writer Cal Folger Day and director Tom Creed, 14 members of DYT made Zoonosis over the past few months, recording original music and video from their homes and finding inspiration from looking at the world around them. Zoonosis (a disease that can be transmitted to humans from animals) is about life forms in lockdown, and our intersections with other animals and plants. DYT says the show is “not so much about passing the time until we get back to normal, it’s about finding a new normal, a better way of being in the world. We could not have made Zoonosis at any other moment in our lives.”

Manager at DYT Angie Gough says their members were affected by the pandemic “in ways that could have been devastating to their mental health and wellbeing.” Creating the show was enriching for everyone, and is “testament to the entire team’s dedication, originality, creativity and can-do spirit and absolutely in keeping with DYT’s 44-year history of giving a platform to young people to make their voices heard”.

Zoonosis is online August 12-15th at 8pm, suitable for all ages, running time 50 minutes. Tickets €7.50 (family €15), going directly to DYT (“We promise to put it to very good use”). https://dublinyouththeatre.com/productions/zoonosis/

Forget snogging in the back of the Chevy in the 1950s. That slice of Americana evoked by “drive-in” has gone all Connemara on us. Another innovative take on live performance in this new world sees Fíbín theatre company presenting Ireland’s first Irish language drive-in drama this week.

Fibin, in association with An Taibhdhearc, has devised live entertainment in a Covid-safe, unique setting in the wild west (or more precisely, Baile na hAbhann, beyond Inverin on the road towards Carraroe).

Fíbín artistic director Philip Doherty’s Fiach promises to “take you on a joy-ride of comedy, drama and suspense. With the atmosphere of a rock concert, the magic of the silver screen and the intimacy of a radio play, it will have you on the edge of your car seat.” Starring award winning actors Fionnuala Flaherty and Dara Devaney, it involves a rebel garda chasing a criminal to the end of the world.

The live show for a live audience follows Doherty’s double win of Best Irish Film and Best Irish First Feature in this summer’s Galway Film Fleadh, for Redemption of a Rogue.

“Fíbín wanted to rise to the challenge in making theatre that is safe, but thrilling for a live audience,” Doherty says. “We’ve had to think outside the box, and if anything it has pushed us to be inventive, and create new ideas for performance.” The drive-in theatre show means “people can enjoy the electric experience of watching a story together in a great atmosphere”. Fiach is on Wednesday, August 12th, at 10pm; weekend midnight showings on August 15th, 21st, 22nd, at Fíbín Teo, Baile na hAbhann, Co Galway; €25 per car. www.fibin.com

Across Ireland on Friday, August 14th, Music Network presents some of the first live music in a long time, with a series of five live concerts. In Live and Local, some of Ireland’s top musicians perform in separate venues, in an environment that’s as safe and as comfortable as possible, within current public health guidelines, of course.

Music Network CEO Sharon Rollston says: “We have all deeply missed the live music experience since lockdown back in March and it is great to be able to offer people the opportunity to hear musicians perform in person again.”

The 7th annual Chamber Music on Valentia has an online edition of its festival this year, from Thursday, August 13th, reshaped to gather renowned Irish musicians performing internationally, celebrating important anniversaries and presenting new work reflecting the history and location of Valentia island.

Irish pianist Cathal Breslin gives a recital of Beethoven (for his 250th), De Falla and Rachmaninoff, filmed where Breslin is working at Arizona State University.

The festival opens on 13th with a digital installation by photographer and Valentia resident Stephen Power, focused on the sights and sounds of An Dairbhre (Valencia) and featuring music by Deirdre McKay. Ireland’s most westerly Music Festival says it misses its “live audiences and the magic of Valentia Island, Co Kerry, and hopes in the interim these musical moments bring joy and happiness to all our supporters”.. www.chambermusiconvalentia.com.

Following the Abbey Theatre’s latest iteration of Dear Ireland on Monday (and still online), next week it premieres Lisa Tierney-Keogh’s This Beautiful Virtual Village, a witty, Zoom-age adaptation of This Beautiful Village, which won an Irish Times Theatre Award for Best New Play in 2019.

After a return to the Abbey stage and a nationwide tour were cancelled due to the pandemic, Tierney-Keogh adapted the script, switching the action to a lively residents’ association meeting over Zoom. Viewed online, This Beautiful Virtual Village reflects the realities of social distancing and lockdown living. Directed by David Horan, three of the show’s original cast, Pom Boyd, Bethan Mary-James and Michael Ford-FitzGerald, are joined by new cast members Steve Blount, Amy Conroy and Luke Griffin. This Beautiful Virtual Village premieres on August 17th at 7.30pm and is available for one month. Tickets: €5 abbeytheatre.ie

Celebrating Gwen O’Dowd’s Limen, a new large-scale work made through Graphic Studio Gallery’s visiting-artist scheme, the studio has announced O’Dowd as its new featured artist. O’Dowd, who has been making prints at Graphic Studio for more than 30 years, is associated with emotionally charged landscape work, inspired by nature and addressing topics as diverse as the ecological devastation of the Gulf War, the grandeur of the Grand Canyon, the mythically sexualised landscape of coastal Ireland, and the elemental force of the waves and the “humanising”of bird life. has images of O’Dowd’s making process, insights and information about her art practice, with works for sale online at graphicstudiodublin.com